*Update: Note that this original report refers to this bird as a Black Storm-Petrel, it was eventually confirmed as a Tristram's Storm-Petrel, a Hawaii/central pacific species which was the 1st North American Record!*
Storm-petrels are diminutive little seabirds usually only glimpsed for a moment as they flutter 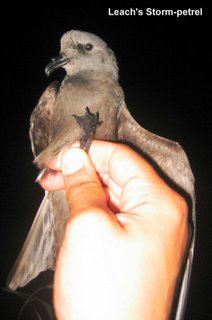 over the surface of the ocean. They are part of an order of birds know as Procellarids, more commonly called the "tubenoses" for the presence of a specialized structure that encases the nasal openings on the top of the bill. They are long lived, with records of individuals in excess of 35 years old, lay a single egg each season which they will rear over the course of several months, and are the most pelagic of all seabirds which breed on the Farallones. Storm-petrels travel great distances from their breeding colonies in search of food, sometimes up to 250 km in a single foraging trip, and spend most of their lives in the open ocean. They are primarily nocturnal at the colony, returning only after full dark in order to take their turn incubating the egg or to feed waiting chicks. Approximately half of the world's population of Ashy Storm-petrel breeds at the Farallones along with a small population of Leach's Storm-petrel.

Twice a month, we go out in the middle of the night to mist net these incredible birds as they return to the colony. This work is part of a long-term mark/recapture study to assess population status and trends and to estimate survival. But on April 22, we had an unexpected visitor to our colony, the Black Storm-petrel. 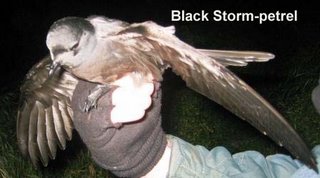 Black Storm-petrels are the largest of the storm-petrel species commonly seen along the west coast of North America, and are considerably larger than both Ashy and Leach's, as can be seen in the photo below. The bird on the left is an Ashy while the bird on the right is the Black. It also has a much stockier build, longer wings, larger bill, and stronger bite than the Ashy (as the person in this photo discovered just prior to releasing the bird). 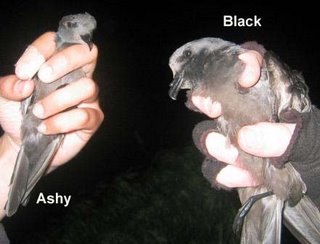 Black Storm-petrels breed on offshore islands from Baja California, Mexico north to the Channel Islands and in the Gulf of California, but the majority of the world's population breeds on San Benito Island in southern Mexico. They are typically seen off the coast of southern California, but may also be seen in Monterey Bay and the Gulf of the Farallones during the winter. However, it is rare for this species to be observed this far north during the breeding season and is the first spring record for the Farallones as well as the only one ever caught on the island. The occurrence of this Black Storm-petrel on the Farallones, in addition to being exciting for those of us living here, illustrates the impressive foraging range of these birds and the unpredictable nature of life on this island.
2 comments:

Seabird breeding begins on the Farallones 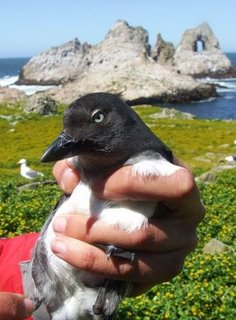 The seabird breeding season has officially begun with the first eggs laid by Cassin’s Auklets on April 11th. This is the true start of the seabird research season. We will now begin monitoring the success of seabirds by determining the number of birds that breed, the number of eggs that are laid, the number that hatch, and the number of chicks which fledge. Cassin’s Auklets are one of the many species that breed on the island and we have studied their populations and reproductive success here since 1972. They are small seabirds (about the size of a robin) that spend most of their lives at sea, feed on zooplankton and nest underground in burrows, rocky crevices, or in nest boxes.

Biologists from PRBO check nest boxes every five days beginning on March 2nd each year. We monitor these boxes throughout the season looking for birds with their eggs and eventually chicks. 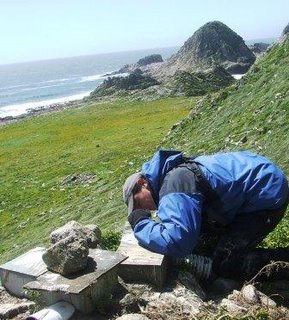 When we find a bird in a box, we capture the adults, determine their band number or place a band on them, and take a variety of measurements (wing length, weight, bill size) which help us to determine the sex of the bird and give us an index of their overall health. Banding birds allows us to keep track of individuals through time and to examine survival, fidelity to nest locations and mates, and the overall reproductive success of individual birds throughout their lives. These boxes create additional nesting habitat and allow us to collect valuable breeding information with a minimum of disturbance to the birds.
Cassin’s Auklets are usually the first birds to breed on the island and the timing of their reproduction can often indicate if it will be a productive year for seabirds at the Farallones. Auklets tend to initiate breeding earlier when the ocean is cold and conditions are favorable for the production of their favorite food, krill. 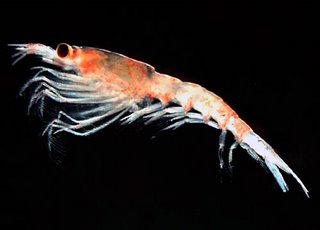 In warmer years, there is less food available and they will delay breeding until conditions improve. So, this species serves as an "early warning" system for overall seabird productivity. For example, last year the ocean was warm, food was scarce and the first eggs were not observed until May 1st, a full three weeks later than this year. As a result the auklets (and other seabirds at the Farallones) were able to rear few chicks. Hopefully, the earlier breeding observed this season is a sign of more favorable conditions and higher productivity for auklets.

While Cassin's Auklets are the first to lay their eggs, the other seabird species are getting ready. Western Gulls, Brandt's, Pelagic and Double-crested Cormorants are all establishing their territories and building nests. Common Murres have been at their breeding sites every day and have been practicing by incubating rocks or small bits of vegetation. Puffins have returned to the colony and the Rhinoceros Auklets and Ashy Storm-petrels have been in at night. Soon these species will have eggs too and things will get very busy for the next few months.
No comments: