As we come to the middle of the winter season the majority of the cows that are going to pup on the Southeast Farallon Island (SEFI) this year have made it to the colony and pupped. Although a few stragglers may still arrive some of the first cows that arrived back in December have already weaned.  Typically northern elephant seals cows nurse their pups for about 24 days before returning to the sea to make their way back to feeding grounds in the northern Pacific Ocean. During this short time pups will gain 150-250 pounds or around 10 pounds a day! When their moms leave pups will be a hefty 300 pounds but they need this large energy reserve to survive while they learn to swim and forage for themselves. 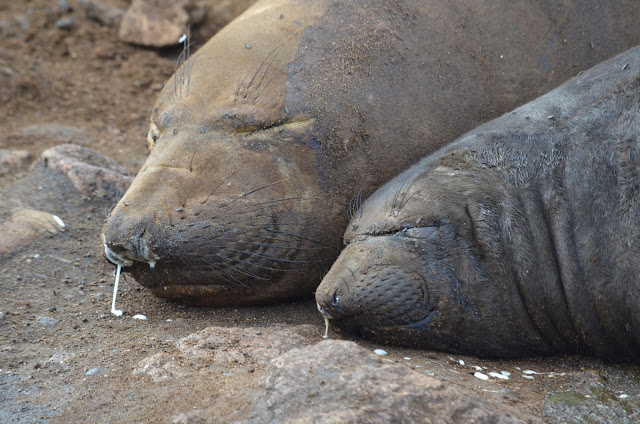 So far in the colony eight pups have successfully weaned and are affectionately called "weaners". One of these weaners, “06”, is the daughter of Venus. Venus arrived to SEFI on December 25th and had her pup on December 28th. During a particularly stormy day in early January Venus decided that the beach she and her pup were on was too exposed to the large waves and made the unusual choice to move her pup to another beach. This move turned out to be a good choice and she nursed her pup for 26 days before leaving on January 23rd. To have successful pups, cows not only have to pick a good pupping location, they also have to commit a huge amount of energy to nursing. Northern elephant seals do not eat while they are hauled out and cows will lose 500-700 pounds during the pupping season. 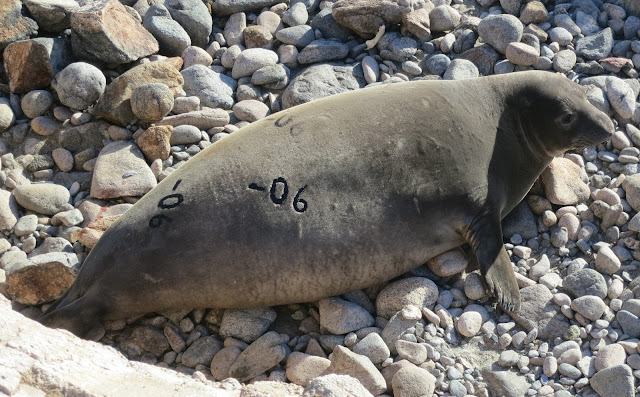 Venus when she first arrived (Stamped -06)

Venus and her pup “06” after 3 weeks of nursing 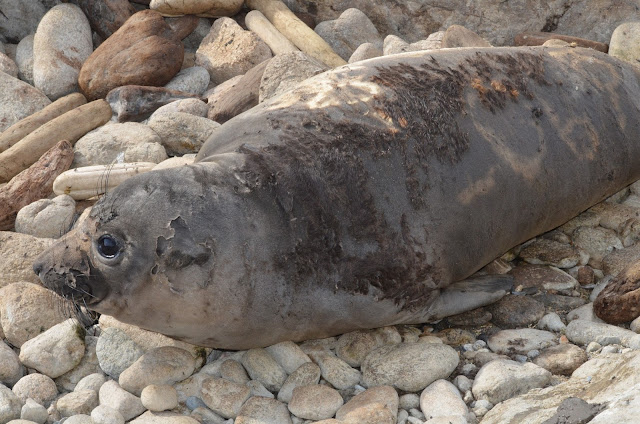 “06” is one of our first weaners of the season and has almost finished her first molt.
It has been a challenging season for some of the other cows and pups of the in the colony.  Several pups have been lost due to large swell events and others have been caught in the crossfire between fighting males. This has left some cows without pups but plenty of milk. This circumstance has enabled some pups to become what are known as super weaners. Super weaners (or double mother suckers) are pups that were weaned from their moms but then continued nursing off of other cows. With all the extra milk super weaners’ weight can reach upwards of 600 pounds. Check out the youtube video from the hit TV series "The Big Bang Theory" when they discusses super weaners: https://youtu.be/FaTfNiXHTCg?t=1m25s

Currently in the colony we have two weaners that are on their way to becoming super weaners. Shelly’s pup “03” and Jane’s pup “20” have both found new cows that lost their own pups early in the season who are willing to nurse them. Weaner “20” was nursed by his mom Jane for 26 days but after Jane left on February 4th “20” was spotted nursing from cow Maddy. Maddy protects “20” like he was her own and has been nursing him for a week already. 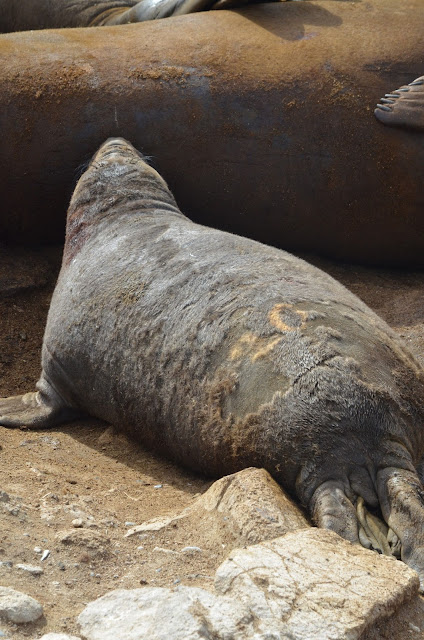 The second super weaner “03” was weaned around the same time as Venus’ pup “06” but has been continuing to nurse from his new mom Frances for almost two weeks. “03” is definitely the largest of all of the pups and weaners on the beach and is even starting to rival some of the cows in size. Only time will tell if all the extra nursing will give this King of the Pups a competitive advantage later in life but hopefully he will return to SEFI in the future so we can continue to follow his progress and see if he becomes King of the Beach. 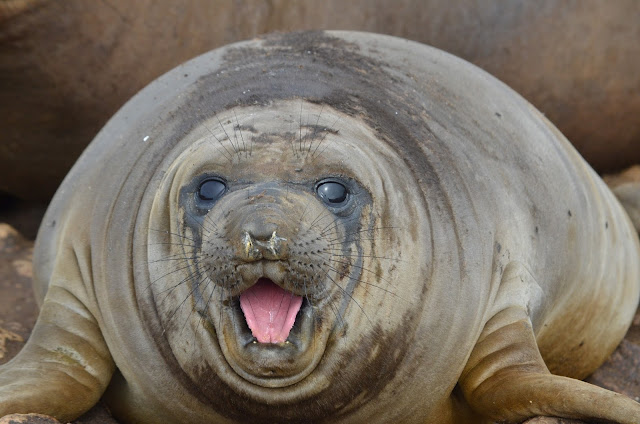