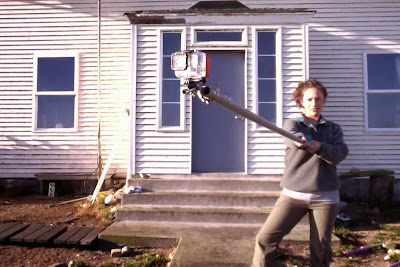 To me, it seems unfair to only experience the elephant seal world while they are hauled out on land. They spend the majority of their life in a completely different medium: water. While on land, elephant seals seem awkward, clunky, bulky, strange, sluggish, and silly, but in the water they are beautiful and possess a certain gracefulness that can’t be fully appreciated while they are bound to land. I was interested in entering the pinniped world (the group that includes seals, sea lions and walruses), but I wanted to remain non-invasive. After a short brainstorming session and some mild construction with Ryan Berger (the lead winter biologist), we created the “GoPro on a stick”. It’s essentially a GroPro camera jerry-rigged and mounted onto a five-foot long PVC pipe. On calm days with good visibility I would simply lower the GoPro into large tide pools or calm gulches. The juvenile elephant seals were particularly interested in the ridiculous contraption we had created, and invited themselves to check it out. Some behaviors included rubbing their vibrissae (whiskers) on the lens, swimming up and inspecting the GoPro for a closer view, and occasionally a little nibble. This video is the result of a few days using the GoPro on a stick in exploration of these magnificently well-adapted pinnipeds in their underwater domain. I hope these kinds of glimpses into the lives of these creatures enlighten, inspire, and create an awareness of how astonishing these animals are.


While the winter season here at Southeast Farallon Island usually focuses on the soap-opera-esque, high stakes drama of elephant seal pupping and mating season, there are many other marine mammals that utilize the high productivity and unique location of the Farallon islands in their ocean travels.   These islands are a regular stopover for other seals and sea lions, as well as their larger ocean companions – whales and dolphins.  Many whale species are known for their great yearly migrations – humpbacks from Alaska to Hawaii, grays from the Arctic to Baja - moving from cold but nutrient-rich northern waters to temperate  (but less full of food) or tropical waters in the winter.  These whales make the trips for the same reason elephant seals return to the Farallones year after year – it’s a great place to raise a kid.  Warmer waters are better for newborn whales, and they nurse from mom long enough to build up a nice blubber layer before heading back up to the cold waters of the north.
Most of these whale migrations start in late fall or early winter, as grays, blues, humpbacks, and more pass by our houses on Southeast Farallon, one at a time or in large groups with whale blows visible in every direction.  A few months later, the blows start showing up in the south, as the whales return to summer feeding grounds, this time often with a new calf in tow.  In the past few years, researchers here on SEFI have noticed a few of those whale blows in months when they shouldn’t be here.  Some “resident” gray whales – those that don’t migrate all the way south – settle in around the Farallones, probably taking advantage of the wonderful food supply provided by our proximity to the continental shelf.   This subset of “residents” may be younger whales that are not yet sexually mature, and do not need to complete the full migration to the calving and breeding grounds down south, so they decide the Farallones look like a good spot to stay for the winter.


We keep track of these resident whales, as well as the migrating ones and any dolphins who happen to pass our way, with our daily “Cetacean Watch.”  Twice a day, and sometimes more often if the weather and visibility cooperate, we climb the trail to the lighthouse, where visibility on a clear day is 40+ miles in all directions, and set up with our scope, binoculars, and an iPad.  The iPad is a new addition to our daily whale watches, not just because it’s easier to use its built-in GPS and compass when spotting whales, but because of a new app called “Spotter Pro,” by Conserve.IO.  This app (currently only for Apple’s iPad & iPhone) allows users to collect field data of animals, plants, and other environmental information, and provides a unique opportunity to participate in “citizen science.”  Recently, the app has been used to track and upload sightings of whales and dolphins off the California coast.  We use Spotter Pro to upload real-time information on the locations of these animals around the Farallones.  By providing information on where they are, the app helps to reduce the chances of whales being struck by large vessels when they’re in California shipping lanes.

Ship strikes are one of the biggest threats to whales and dolphins, and often go unnoticed – dead animals often either sink out at sea or wash ashore too decomposed to determine the real cause of death.  Reducing the co-occurrence of whales and large boats (making sure they’re not in the same place at the same time) is the best way to prevent ship strikes, and using the Spotter Pro app to map the locations of whales and dolphins could be a simple, user-friendly and openly available way to prevent co-occurrence.  Recent changes in the size and locations of California’s shipping lanes were implemented with whale protection in mind, and with both researchers (like us on SEFI) and citizens out on boats or onshore uploading information on where they see whales, we can assess the effectiveness of these changes while preventing strikes from occurring.


These shipping lanes pass close by SEFI, and while drinking a morning cup of coffee on the porch, it’s not unusual to see huge container ships cruising by on the horizon, along with 5 or 6 blows closer to shore, while looking in just one direction.  One of the main goals of Spotter Pro and its East coast sister app, Whale Alert, is to allow ship captains access to real-time location information, so they can either avoid areas with lots of whales or slow down while passing through them.  Our unique location in the midst of these shipping lanes and our ability to look for whales on a daily basis provides important information on their location – especially for the resident whales that decide to stick around.  The Farallones might be a great whale buffet, but they’re also in the middle of some heavy ship traffic, and providing daily information on whales in the area will help reduce their chances of being run over.

It has been a banner year for whale watching off the California coast, and this season it seems they are sticking around longer than usual, a strange occurrence that only emphasizes the need to protect them from collisions.  Here at SEFI, we are seeing blue whales almost every day, unusual for this time of year, and we’ve had a few humpbacks also making a later trip down south, in additional to a few pods of Risso’s dolphins.  Last week, we caught a glimpse of a distinctly v-shaped blow among some southbound gray whales, which usually have bushy or heart-shaped blows.  Right whales, one of the most endangered species of marine mammals, have very prominent v-shaped blows, though some gray whales have also been seen with a larger divot in their blow, making it appear v-shaped.  Sightings of North Pacific right whales are extremely rare, and it is even more rare to see one this far south.   Two sightings occurred earlier this year off the coast of British Columbia, the first for that area in 62 years.  Unfortunately, we couldn’t confirm the identity of the whale with the v-shaped blow, but we alerted NOAA and other organizations further down the coast, hoping that the southbound whale would be seen and confirmed somewhere on its travels.


Our great gray whale migration is just starting to pick up, and I look forward to seeing more and more of their huge spouts passing us by every day (along with any other random whale and dolphins that may appear), while trying our best to conserve and protect them along with all the other wonderful creatures at SEFI – residents and visitors alike.