This past week, PRBO biologists hosted special visitors to the island - a team of scientific experts on plants and animals that inhabit the intertidal zone. The Gulf of the Farallones National Marine Sanctuary, a program of NOAA, has been conducting surveys of the South Farallon Islands' intertidal zone every year since 1992. This long-term monitoring provides valuable baseline information on species composition and richness in a relatively pristine area. 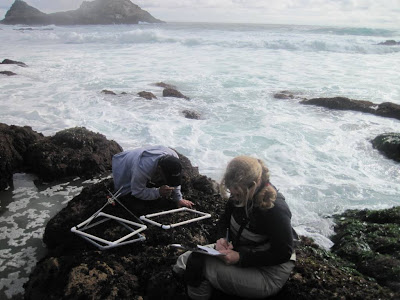 Documenting species composition in permanent plots.
The intertidal crew includes biologists from the Sanctuary, the California Academy of Sciences, and Tenera. They inventory invertebrates, take photographs for archives, and document algae cover in permanent plots at 6 sites on SEFI and West End. Surveys are conducted 3 times per year, weather permitting of course. 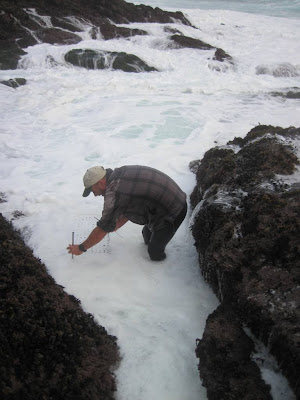 Working conditions in the intertidal zone can be rough, especially during winter storms.
This year, 5 new species were documented. Moreover, a black abalone (Haliotis cracherodii) was sighted here for the first time since 2000. Black abalone, once the most abundant species of abalone in California, is now perilously close to extinction due to past overfishing. It is currently federally protected under the Endangered Species Act. The South Farallon Islands are at the northern extent of its range. 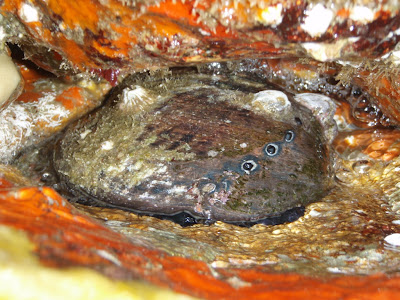 Black abalone, an endangered species, was documented here for the first time in 10 years.
The intertidal crew included Dr. Rebecca Johnson, an expert on opisthobranchs from the California Academy of Sciences (you can link to the Academy's Rocky Shore Partnership blog here). These marine molluscs, also known as nudibranchs or sea slugs, have reduced, internalized, or completely lost their shells over evolutionary time. Their brilliantly luminous neon colors in distinctive patterns serve as a warning to potential predators - many are foul tasting. But their warning colors also make them some of the most beautiful animals inhabiting the oceans. 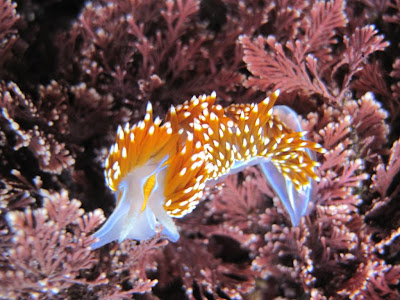 Horned Aeolid (Hermissenda crassicornis), one of the more common nudibranchs on the Farallones. 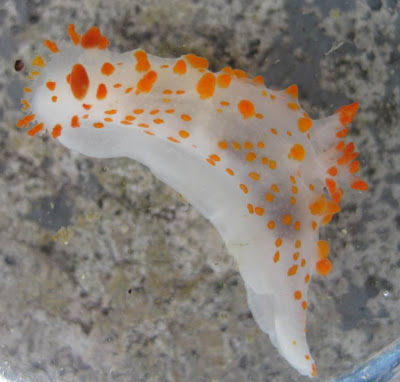 Clown Dorid (Triopha catalinae)
The intertidal zone is one of the harshest environments on Earth. The zone is exposed to the air at low tide and underwater at high tide, and is continuously pounded by the surf, which on the Farallones can be very rough indeed. The plants and animals are well-adapted to their extreme environment. The relative lack of pollution and absence of human trampling on the Farallones allow biologists a glimpse into the structure of an intertidal zone comparatively free of direct human impacts. This crucial information is yet one more reason why the Farallones are such a tremendous resource to our understanding of the ocean ecosystem. 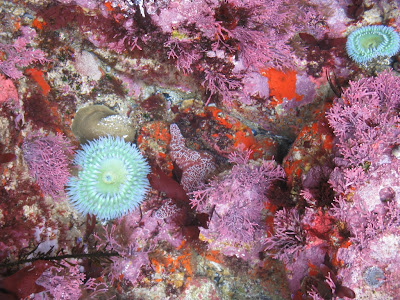 Plants and animals compete for space in Jewel Cave, one of the loveliest tidepools on SEFI. 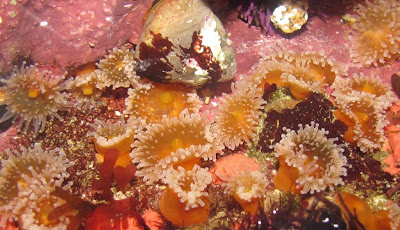 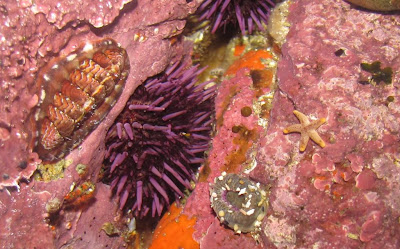