In addition to providing PRBO biologists with drinking water for the year, winter rains cause SEFI's plant life to burst into bloom. Wildflowers dot the typically brown landscape with a range of colors, from subtle purple to bright yellow, all against a backdrop of green, making late winter and early spring undoubtedly the most botanically beautiful time of year here. 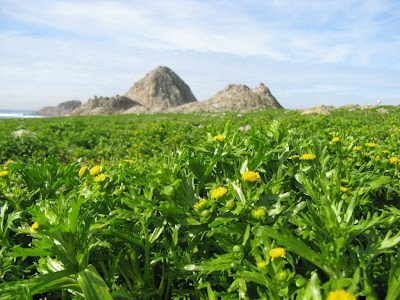 Maritime goldfields blanket the island with bright green and yellow.
The most common plant on SEFI is maritime goldfields (Lasthenia maritime), also known as "Farallon weed." This native spreading annual blankets the entire island, from the edge of the marine terrace to the lighthouse, with vivid green leaves and bright yellow flowers. It even grows on West End Island. Cassin's auklets dig their burrows underneath its canopy. 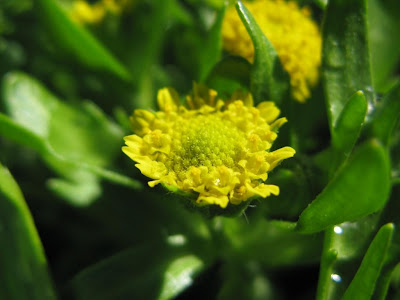 A close-up view of maritime goldfields. 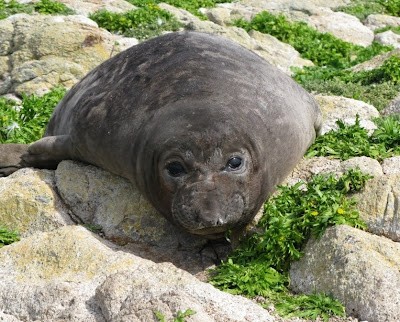 Human visitors aren't the only animals on SEFI to appreciate the maritime goldfields. Sometimes on hot days the elephant seals will fling bits of the plant on their backs in an attempt to stay cool. In these photos, elephant seals lounge in the goldfields on 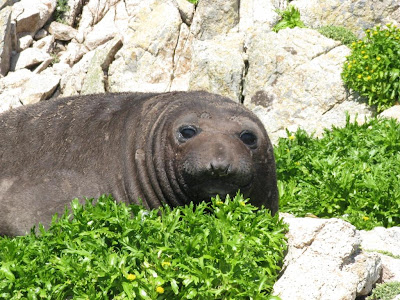 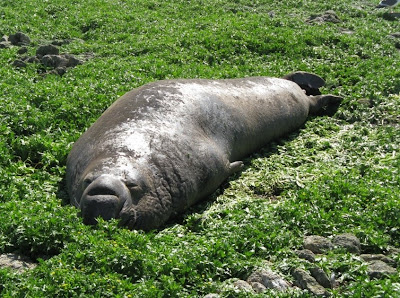 Other common native plants include fiddleneck (Amsinckia spectabilis), with small, yellow, trumpet-shaped flowers that grow along a stalk like its namesake; miner's lettuce (Claytonia perfoliata), with tiny pale pink flowers in the center of a circular, glossy leaf; red maids (Calandrinia ciliata), whose flowers are a gorgeous deep purply red; and common chickweed (Stellaria media), a spreading, low-growing plant with a cluster of little white flowers. Another favorite is sticky sand spurry (Spergularia macrotheca), a succulent with fleshy thin linear leaves and purple or white flowers. 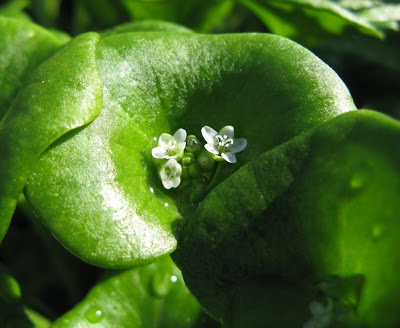 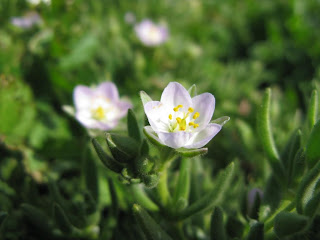 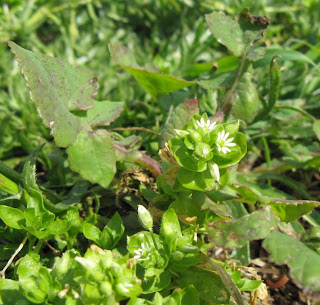 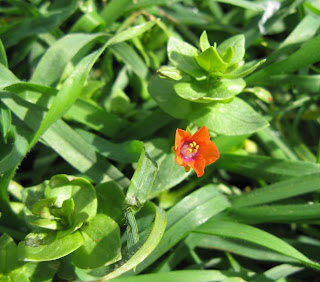 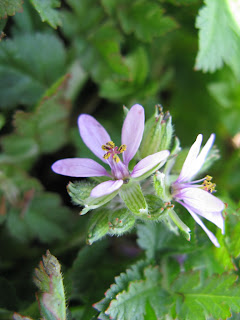 Action on the Beach

With only a handful of female elephant seals remaining on Sand Flat and , the bulls are vying for any last-minute mating opportunities. Bedlam Boy deserted the marine terrace harem with its one lingering cow, headed to which still had 8 cows, and kicked out former harem-master Mauricio. Not to be deterred, Mauricio moved onto Sand Flat and attempted to mate with a departing cow there. Rusty, the alpha male on Sand Flat and reigning elephant seal king of SEFI, bellowed his protest, forcing Mauricio to retreat. 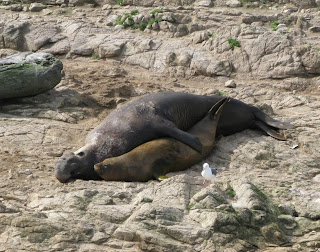 Bull elephant seals are nearly 3 times as massive as cows,
as shown in the above photo of an attempted copulation by Mauricio on Sand Flat. 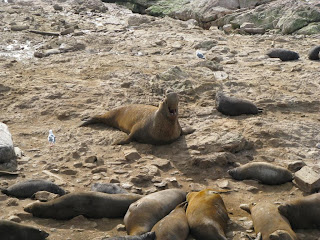 Bellowing with the large nose, a secondary sexual characteristic, is used as a display of dominance
towards other males. Dominant alpha bull Rusty, above, only needs to bellow and all other males retreat. 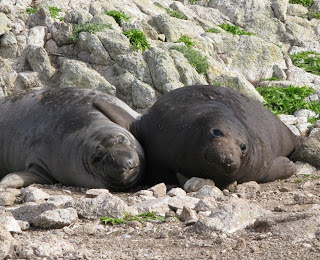 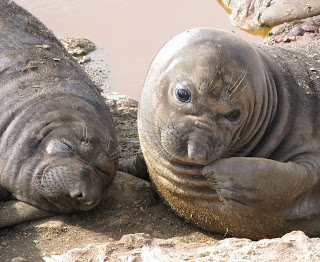 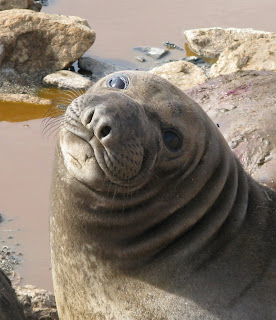 Powered by the Sun

The Southeast Farallon Island research station is powered primarily by the sun's energy. Eleven years ago, a solar array was installed on the roof of the powerhouse and a battery bank inside supplies the houses and workshops with electricity. Those solar panels and batteries served us very well for the past decade. This solar power system replaced diesel generators that ran nonstop during several decades of Navy and Coast Guard presence on SEFI, and won the refuge an environmental leadership award from the U.S. Fish and Wildlife Service. But the life of the solar batteries had come to an end. 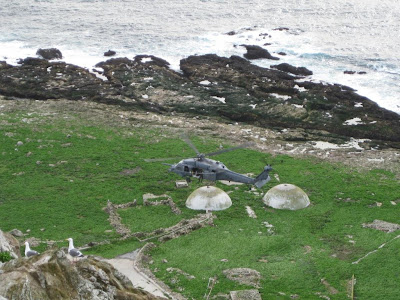 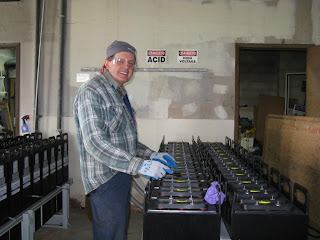 Mike McGoey of NexGen installs the new batteries: he also installed the original batteries in 1997. 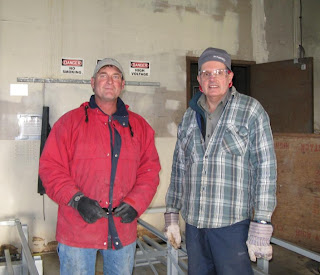 Charles Whitefield and Mike McGoey hard at work making sure we have solar power to support the research station.
Mendel Stewart, the manager of the U.S. Fish and Wildlife Service's entire San Francisco Bay Wildlife Refuge complex - of which the Farallon Island Wildlife Refuge is just one part - visited SEFI to oversee the delivery of the batteries. Derek Lee, PRBO's winter Farallones biologist, showed Mendel the main northern elephant seal breeding beaches and Steller sea lion haulouts. After all, the wildlife is what we are out here to monitor and protect. Thanks to the U.S. Fish and Wildlife Service, NexGen, and the California Air National Guard, PRBO scientists are able to continue conducting research into one of the world's most productive and important marine environments, powered by the sun! 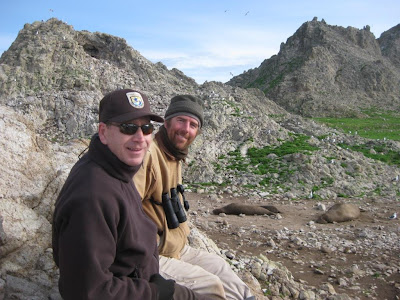 Mendel Stewart of the USFWS and Derek Lee of PRBO Conservation Science survey the elephant seals on Sand Flat.
No comments:

This is every elephant seal lover's favorite time of year. Plump, big-eyed weaned pups are now the most numerous age class of elephant seals on SEFI. The beaches and marine terrace are strewn with weaners who were left behind when their hungry mothers headed back out to sea after nursing their pups for 25 to 30 days non-stop - without eating anything the entire time. 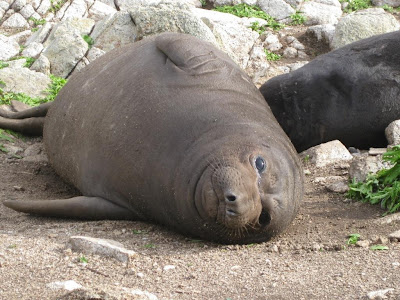 A newly weaned pup still has its black fur. 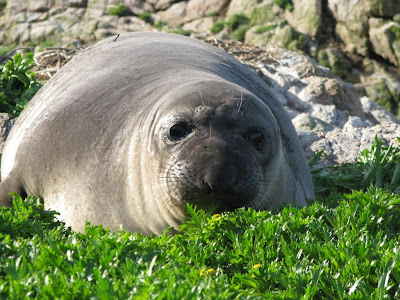 This older weaner is still very fat but has molted its black pup fur. It is now a silver-gray color.
Weaners will now remain on the island for the next month, sleeping and playing with each other, and molting their black pup fur until their new pelt is a smooth silver-gray. They will live off their (considerable) blubber for the month, before leaving land and inshore waters for the first time and swimming out into the deep sea to forage for fish and squid. It likely will be the most difficult year of their lives, dodging sharks and searching for food using nothing but their instincts. Ocean climate conditions such as El Niño Southern Oscillation and Pacific Decadal Oscillation play a large part in whether they survive. We wish them luck and hope to see them back on SEFI next year. 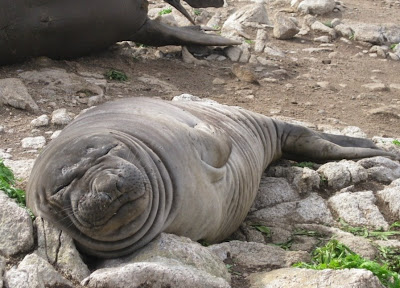 This is an older weaner that has metabolized much of its blubber. It will soon be ready to head out to sea.
1 comment:

Today, SEFI biologists made a special, all-day excursion over Jordan Channel to to check two elephant seal breeding beaches. This trip is a rarity and a privilege because receives an extra level of protection from human disturbance. Literally thousands of seabirds and sea lions reside here, as well as Steller sea lions and a small but growing population of northern fur seals. No human structures exist on . In fact, the United States Congress designated 141 acres of the – including but excluding SEFI – as part of Farallon Wilderness in 1974. This is the smallest designated wilderness in . 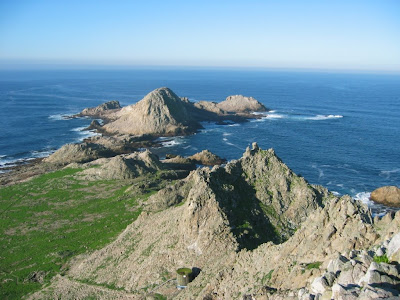 View of West End Island in the distance, from the lighthouse on SEFI.
West End Island is completely off-limits during the spring and summer seabird breeding season. During the fall season, biologists visit West End a handful of times to monitor the breeding fur seals. Over the winter, we typically check the elephant seals with just a couple of trips, each time crawling slowly and carefully along the foothill of Maintop and over Raven’s Cliff so as not to scare California and Steller sea lions into the water. On our way to the far western end of the island where the elephant seals breed, we look for sea lions with shark bites or plastic straps around their necks, and record numbers that were branded on sea lions by researchers on breeding grounds elsewhere. The brand number information is shared with the researchers who marked the animals so they can estimate survival and how far the sea lions dispersed from where they were born. 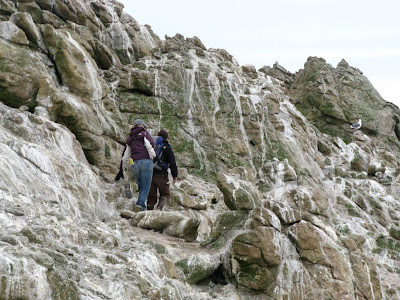 Interns April Ridlon and Ari Waldstein make their way across the guano-covered rocks on West End. 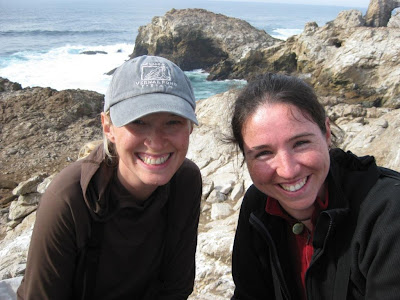 April and Ari with Pastel Cave and the edge of Great Arch in the background. 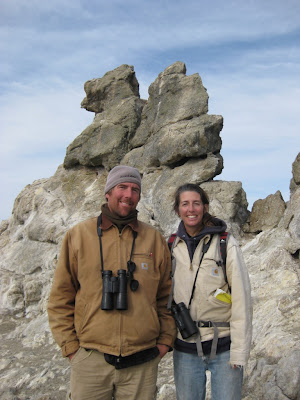 On this trip we found 10 elephant seal cows and 10 pups at Pastel Cave Highlands, and 11 cows and 11 pups and 3 weaned pups on . once supported a harem of more than 200 cows, but the population fell dramatically after large winter storms hit the islands in the 1983 El Niño, and it hasn’t rebounded. 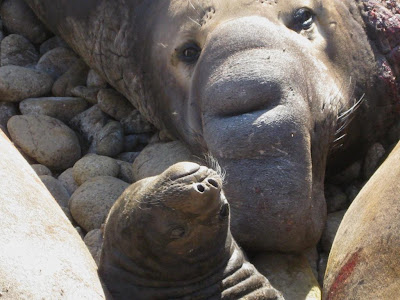 A bull elephant seal weighs about 5,000 pounds - much more than this "little" 150-pound pup! The blood on the bull's neck is from a fight with another bull for dominance of the harem.

To our delight, we also spotted a group of 24 northern fur seals on Indian Head Beach. Some had been tagged at the Channel Islands in southern California. We read the tags and enjoyed watching and photographing their antics. These sweet-looking but rather aggressive seals were extirpated from the Farallon Islands by Russian and Yankee fur traders a century ago, and are only recently making a comeback here. Fur seals first returned to West End Island in 1995, when 4 individuals were counted. Last year the population had grown to nearly 200 including pups. 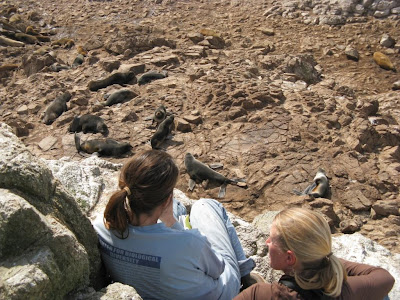 Monica and April check out the northern fur seals on the flat below. 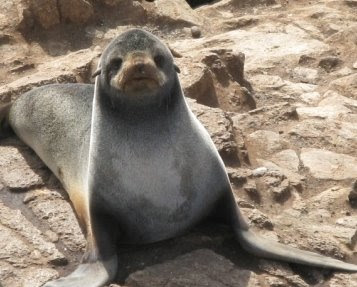 This northern fur seal looks sweet but can be rather aggressive.
3 comments: