What do gulls eat?


‘Much that is good and all that is evil has gathered itself up into the Western Gull.
…cruel of beak and bottomless of maw…this gull asks only two question of any other living thing: First, “Am I hungry?” (Ans. “Yes”) Second, “Can I get away with it?” (Ans. “I’ll try).’

So wrote naturalist William Leon Dawson in The Birds of California in 1923, and a brilliant demonstration of that bottomless maw is found in the SEFI Gull JuJu Archive.  The Archive, cherished for posterity in a tin box in our data room, is a random collection of strange and interesting objects brought to Southeast Farallon Island by gulls.

The gulls don’t often carry things around in their bills for long, preferring to swallow them first and ask questions later, so it’s reasonable to assume that everything in the Gull Juju Archive has probably been swallowed and regurgitated by a gull at least once.  Things like a six inch plastic toy hammer, a baby doll leg, a rubber tortoise, a golf ball, a set of vampire teeth, a collection of large fish hooks and four jelly beans still sealed in a bag inside a plastic Easter egg. 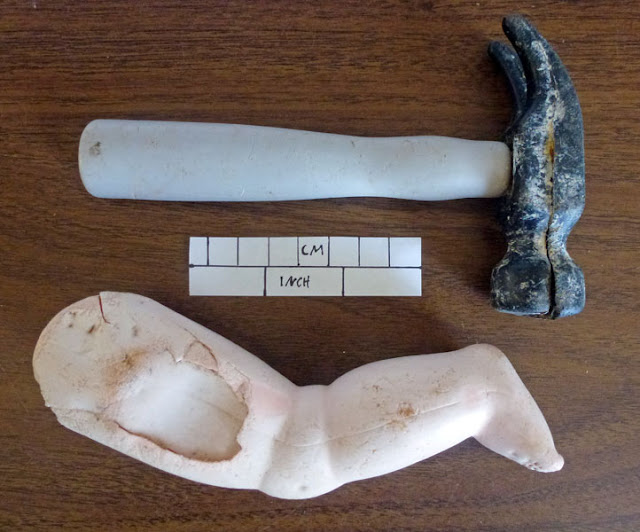 There are fragments of driver’s licences and credit cards, a key, a few toy cars, a pacifier, Lego blocks, marbles, a balloon that reads ‘happy f***ing birthday’, a drinks stirrer from a restaurant in Newport Beach and another from Denver. 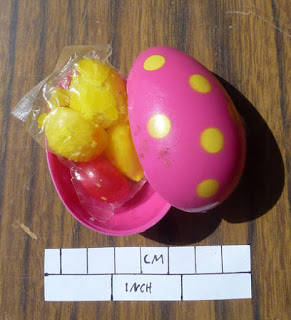 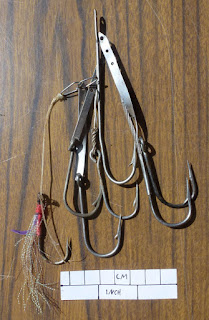 And if none of these were impressive enough evidence of the awesome power of the gull’s gullet, SEFI biologist Pete Warzybok tells me that not only has he seen a Westen Gull catch and swallow a flying Rufus Hummingbird, he has also seen one regurgitate a tennis ball.  Yes, seriously, a tennis ball.

Pinniped Necropsies on the Farallones

(Warning some photos may be a bit graphic)

PRBO Conservation Science, in collaboration with other agencies, performed pinniped (seal and sea lion) necropsies during the 2012-2013 winter season on SEFI. All carcasses were recovered in a safe manner and with minimal disturbance to live pinnipeds. Aborted California Sea Lion (CSL) fetuses were first noticed on the 24 Feb 2013 and by 15 Mar 2013 a minimum of 85 had been documented. Tissue samples of brain, liver, bile, stomach contents, feces/meconium and urine were collected and tests were run for traces of Domoic Acid (DA); a common cause for CSL strandings. One side effect of adult female CSLs affected with DA intoxication is to abort their fetuses. The placentas of pregnant females act as reservoirs for DA and even if the dams have cleared themselves of DA (through urine excretion), it continues to circulate within the placenta/fetus resulting in abortion. Below is a series of photos showing how one of the aborted fetuses was necropsied and photographed with labels in order to document potential causes of death. 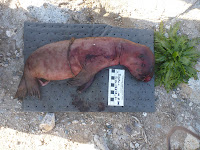 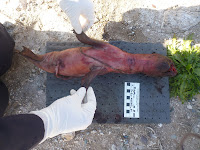 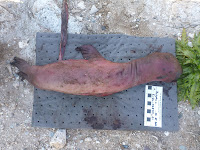 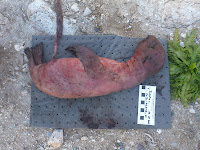 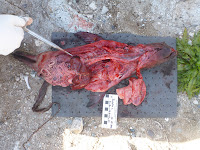 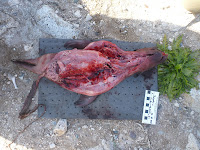 Domoic Acid is introduced via the food web to marine mammals and birds through a variety of intermediaries, including both pelagic and benthic organisms that feed on toxin-producing Pseudonitzschia, an algae and the DA source. High numbers of Pseudonitzschia have often been associated with the end of upwelling events or weak upwelling events during warm years along with low concentrations of macronutrients. In both central and southern California, the occurrence of Pseudonitzschia blooms is also suggested to be tied to shorter term climate events such as ENSO and possibly also to phenomena on time scales of the Pacific decadal oscillation (more on DA and its bioaccumulation can be found here: http://channelislands.noaa.gov/focus/dom.html .)

With that said, all samples collected from the necropsied pinnipeds on SEFI resulted in below detectible levels for DA. In re-evaluating the circumstances and taking into account the recent increase in stranded yearling CSLs in Southern California we believe the cause of the aborted fetuses may be related to lack of prey items. In Southern California large numbers of dehydrated and emaciated sea lions are stranding themselves; causing rehabilitation centers to reach carrying capacity (a link to an online news article with more detail can be found here: http://www.nbclosangeles.com/news/local/Sea-Lion-Pup-Strandings-southern-California-investigated-201503511.html ). Agencies involved in monitoring this population believe that the sea lion’s major food item, schooling fish like anchovies and sardines, are currently absent from the ecological system (link to NOAA website with more details to numbers associated with strandings: http://www.nmfs.noaa.gov/pr/health/mmume/californiasealions2013.htm ). Similarly, if pregnant female CSLs are not able to find sufficient food they may abort their fetuses in response to not meeting the energy requirements needed to carry their pups to full term. We suspect this is the reason for the aborted pups seen on SEFI this past winter season.
Mobile marine mammals are considered to be good coastal sentinels for signaling remote or offshore biotoxin events and by examining carcasses there is increased knowledge of mortality rates and causes which allows for a better understanding of population threats and pressures. Information gained includes complete pathology to investigate diseases and parasites, reproductive biology and life history data, pollution, human interactions and normal biology and physiology parameters. These types of sampling opportunities also help validate and increase understanding and interpretation of data collected from wild populations; especially individuals like marine mammals which are not readily accessible.  PRBO will continue to monitor the CSL population as the pupping season approaches in order to aid management decisions.