One of the things I, as a first-season intern, love about the Farallones is the history that comes with them. Some of it has been rather bloody, wrought with seal hunting and egg harvesting. Over the last seventy years, however, the island has been run by first the Coast Guard, and then the U.S. Fish and Wildlife Service. Over the course of the summer, we’ve had several people come to the island who were here in the past, some from forty years ago and others from more recent times. It is a lovely tradition of the Farallones, and on Friday, August 8, we had visitors that lived on SEFI fifty-five years ago. In 1953, and Lucky Jackson lived on the island with their four-year-old daughter Linda. 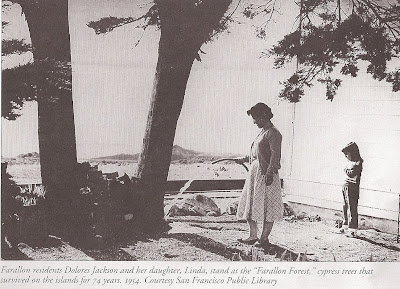 Photo scanned from "The Farallon Islands: Sentinels of the Golden Gate" by Peter White. A fantastic history of the humans and wildlife that have called these islands home.

Naturally, a lot of things have changed. Lucky was an engineer with the Coast Guard and was stationed here for more than a year, so he brought his young family with him to this remote outpost. There were seventeen people on the island at the time and there were many more buildings than are here now. There were even streetlights along the cart path! With scarce communication, didn’t know what to expect when she first came to the island. So, she arrived in a dress and high heels, garments virtually non-existent in the SEFI wardrobe now. Lucky remembers his main job was to maintain and service the aids to navigation employed by the Coast Guard. He recalled a few stories of epic generator fixes and told us of how they were actually allowed to shoot gulls when they annoyed you. Now the islands are a refuge and the gulls and other animals that reside here are protected - though they still annoy you sometimes. remembers the kitchens, saying she spent a lot of time keeping up the houses and “cooking for the boys.” Nowadays it is definitely different, with the boys doing as much cooking as the girls (and just as good). Linda, coming back after living here as a small child, recalls feeding the western gulls extra pancake scraps and movie nights at the barracks. They all commented on how many gulls there are now and remembered that there weren’t very many in the areas where people lived. Apparently life was much different for Faralloners back in 1953.

Cleary for Del, Lucky and Linda, living on the Farallones was an important time in their lives and gave them an appreciation for teh wild beauty of the place they once lived. They were very excited to look around at all the changes and enjoyed learning about what our lives on the island are like now. Almost as much as we enjoyed hearing their stories. One thing that hasn't changed about the Farallones is their ability to shape the lives of the people that reside on them.