This past week the winter crew took advantage of daytime low tides by visiting some of the many caves and tide pools around SEFI. We were able to explore and Little Murre Cave, both difficult to access unless a very low tide coincides with calm seas and no timid Harbor Seals napping on nearby rocks. Waiting for all of these events to converge is enough to frustrate even the most patient tide pool lover, but it was certainly worth it: we saw some spectacular animals. 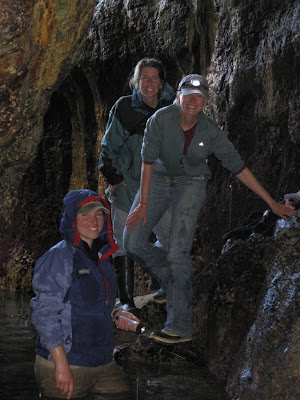 Although it is easy to see how beautiful these invertebrates are, the behaviors and physical adaptations they have acquired to live in such a harsh environment are even more remarkable. Imagine what life on the rocks that ring the ocean's edge of SEFI means for these creatures: crushing surf and hours of dessication, scorching sun and frigid water, Black Oystercatchers and other shorebirds pecking at you from above, and a host of other invertebrates and fish looking for a meal from below. This severe environment produces animals that not only look like something out of science fiction film, but often act like it too. 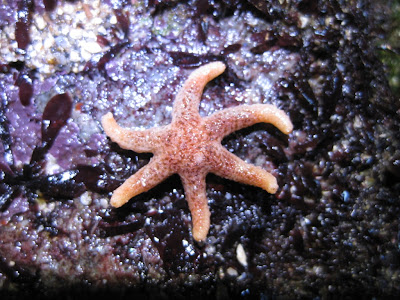 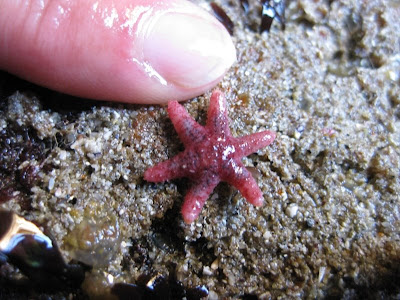 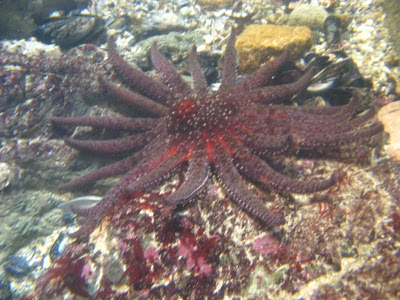 The Twenty-Rayed or Sunflower Star

These stars of the sea are echinoderms, a family name meaning “Spiny skin”, shared by urchins and sand dollars. In addition to their diverse and brilliant colors, we found stars of vastly different sizes and numbers of arms, from the tiny Six-Rayed Star (L. hexactis) which measures just a few centimeters across, to the Twenty-Rayed or Sunflower Star (Pycnopodia helianthoides), which can grow up to 25 centimeters across. No matter the number, all sea stars can drop one of their arms if a predator has them in a death grip, only to regenerate it later. Both also rely on their tube feet, which like suction cups grasp onto the rocks. The Sunflower Star, a top predator, has as many as 15,000 tube feet which help them to move quickly across any surface to overtake and disassemble their prey, including anemones, crabs, mussels, and even other sea stars. 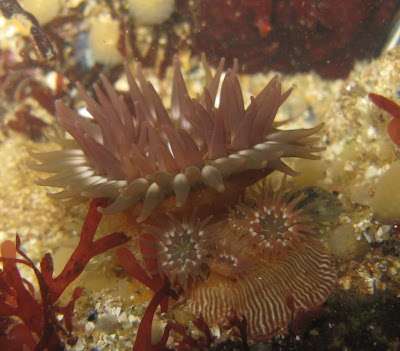 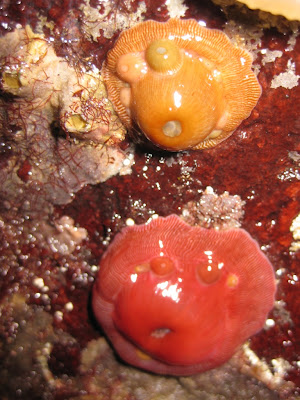 Two Proliferating Anemones close up when they are left high and dry by the low tide. 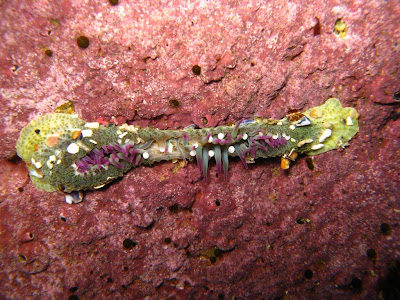 Anemones are gelatinous creatures related to jellies. These Cnidarians have tentacles armed with stinging cells (nematocysts) arranged around their central mouth/gut. Although they may seem to a casual observer to be passive and immobile, anemones display some fascinating behavior. The Proliferating Anemone (Epiactis prolifera) hatches free-floating (planktonic) young out of its mouth, which then attach to the parent’s column at the base, where they live protected until they are about 3 months old. At this point the tiny anemones detach and wriggle through the water to a nearby rock or solid place to settle and grow.


We were lucky to get the above picture of one Aggregating Anemone (Anthopleura elegantissima) in the process of becoming two! These individuals can divide by fission, sometimes creating huge colonies of identical clones from a single individual. When colonies of two different individuals meet, these anemones wage war by stinging each other with specialized, clustered stinging cells, often killing whole individuals and resulting in a line of bare rock between colonies. 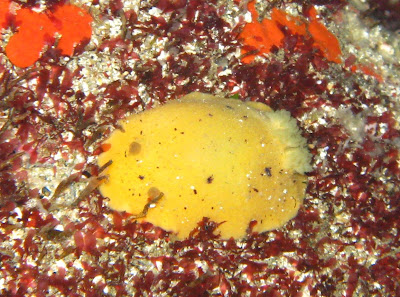 The Sea Lemon or Monterey Dorid

Nudibranchs are some of the most beautiful and rare animals one can find at low tide. Sometimes called sea slugs, their name means “naked gill” and refers to the tufts that extend from their back (cerata), which are actually gills. These Three-lined Aeolids (Flabellina trilineata) in the photo above have probably been seen here on the island for years, but we couldn’t find any record of them in our journals, so we have a first official record for the island! These soft, beautiful, translucent animals are just a few centimeters long, but don’t let their looks deceive you. They are voracious predators of the intertidal zone, and use their meals wisely. When a Three-lined Aeolid preys on a hydroid (tiny attached cnidarians that look like plants), they incorporate the un-fired stinging cells from the hydroids into their own tissues, and can then use them for defending themselves.

Like many other nudibranchs, the Sea Lemon or Monterey Dorid (Achidoris montereyensis), gets its hue at least in part from what it eats. Sea Lemons feed on yellow Crumb-of-bread Sponge (Halichondria panacea) and other sponges. Depending upon their diet, their backs can be bright yellow to deeper orange. 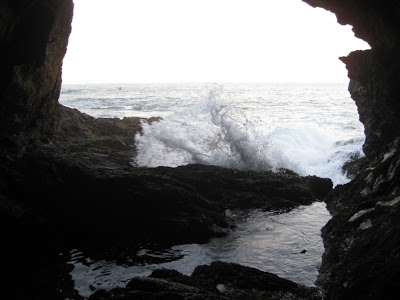 When winter storms hit SEFI and conditions seem difficult for the biologists working here, we only need to look to the intertidal zone to gain some perspective. The more we learn about these amazing species, the more respect we have for their tenacity and adaptability in an extremely harsh, dynamic environment. The intertidal zone is just one of a long list of critical and special habitats that the Farallon Islands provide for life in one of the richest marine environments on the planet.
5 comments: