The first two weeks of our stay were very slow with very few arrivals. The occasional mega-vagrant kept our spirits high. The weather finally gave us a big push of birds the following week. On the 9th, we banded a total of 30 birds, 10 of which were Yellow Warblers; we estimated that there were 14 on the island. For Tow 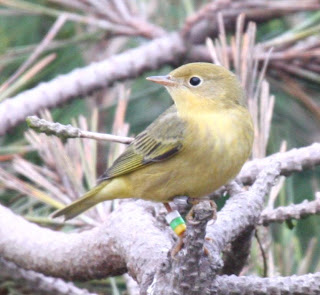 nsend’s Warbler, though, we estimated there were 23 individuals, but didn’t catch a single bird because they were all up at the lighthouse. With so many individuals of a single species, it is impossible to keep track of them all so we try to color band the six most frequently-caught species with unique color-band combinations. These species are Yellow Warbler, Townsend’s Warbler, Yellow-rumped Warbler, White-crowned Sparrow, Golden-crowned Sparrow, and Dark-eyed Junco. On the 10th we put a net up at the lighthouse and banded 18 Townsend’s Warblers of an estimated 33 on the island. In total we banded 82 birds on the 10th and 68 on the 11th. We had a small lull o 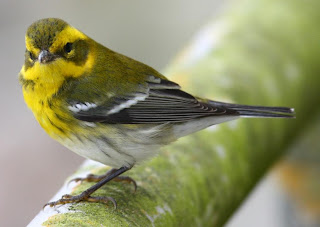 n the 12th before another big wave hit on the 13th and 14th. The birds then tapered off a bit until the 20th when we had another small wave. The timing of this last wave occurred during the VIP trip that was awarded to Reese and Amory Willis at the Blue Ball last year. Boat days often occur during wave days; it might be statistically significant. This is probably because calm conditions that are good for landings also tend to bring birds. Over the last week, strong NW winds and/or fog have kept the birds and bats away from the island, but the weather appears to be changing for the better.

As far as bird vagrants go, this fall has been nothing short of spectacular. 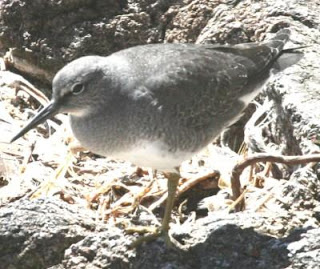 On 25-August, just a few days after our arrival, an intern stated that he had found and photographed a Gray-tailed Tattler in Sea Pigeon Gulch. We all got great looks at it a half hour later at East Landing when it flew up calling its diagnostic "chuweet-chuweet-chuweet" several times in the company of 2 Wanderings. This is a Siberian species with only a single previously accepted record for California that occurred in 1981. While this bird was in the company of the Wanderings, it was clearly paler gray with more restricted gray on the sides, and it had more conspicuous pale spots on its tertials. The nasal groove was about 2/3 the length of the bill, which is considered a better characteristic for Wandering Tattler. The nasal groove on a Gray-tailed Tattler should be less than half the length of the bill. The call has been stated by many to override the other features so it will be interesting to see how the California Bird Records Committee (CBRC) handles this bird. We also had a Semipalmated Sandpiper from Aug 23 to Aug 24. 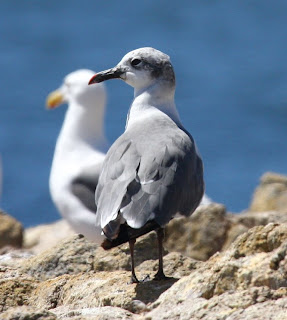 gull survey, we found a second year Laughing Gull mixed into the Western Gulls. This is only the 4th island record. On 16-Sept, we found a first-year Franklin's Gull during a gull count, another very rare bird on the island. In late summer, we mostly see California Gulls on this survey, but also a few Heermann’s and Ring-billed. Most of the juvenile California Gulls out here have an interesting peach phase plumage with varying amounts of pale peach color on their underparts and head and occasionally scattered on their back. For some reason, this plumage is far more common at sea than on the coast. The answer seems as though it should be due to wear or bleaching, but all the feathers look fresh. In October, gull diversity usually picks up when we get an influx of Herring, Glaucous-winged, and Thayer’s Gulls.


On Sept 3rd, we had poor looks at a bird on the Terrace he th 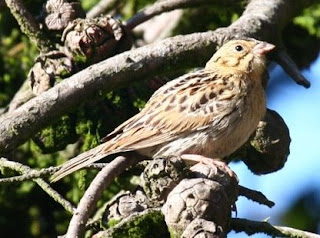 ought may have been a Baird’s Sparrow. We relocated it a few hours later under the Coast Guard Trees. One intern tried to flush it into the net, but it kept bouncing out. He eventually got photos of it perched in the trees (see attached photo). This species breeds in grasslands of the northern Great Plains and winters in grasslands from SE Arizona to Texas; there probably aren't many records of this species in trees. Because they are cryptic and skulky, they are very difficult to observe in their native winter/stopover habitat. On the Farallones where land and vegetation are limited, they are relatively easy to find and relocate. This was only the 4th record for the island and just the 5th for California. 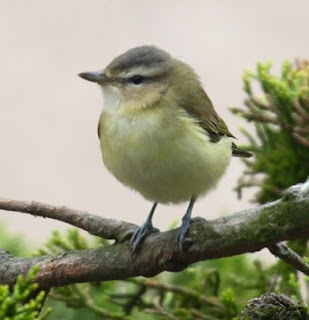 We found and banded a Red-eyed x Philadelphia Vireo the next day; a first for the island and possibly the first west of the Rocky Mts. This was not an easy bird to identify and required an in-hand analysis of the length of its 10th primary feather (p10) relative to its primary coverts. Its p10 was >5 mm shorter than its primary coverts. The similar appearing eastern Warbling Vireo would have had a p10 that wa 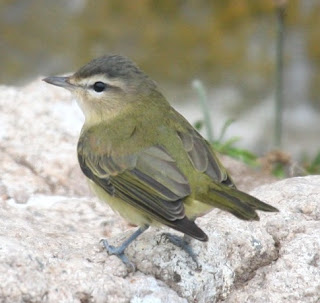 s longer than the primary coverts. In our opinion, the plumage and structure of this bird were halfway between a Red-eyed and Philadelphia Vireo. All the in-hand measurements were right in between these two species. The flat, sloping forehead met the bill at a relatively acute angle that reminded us a lot of a Red-eyed or a Yellow-green Vireo rather than a Philadelphia, and it had a dark eyeline and lateral crown stripe. None of these characteristics are good for Philadelphia, but the bird was too small for a Red-eyed or Yellow-green. We feel fairly confident in this bird’s ID, but would appreciate input from others. 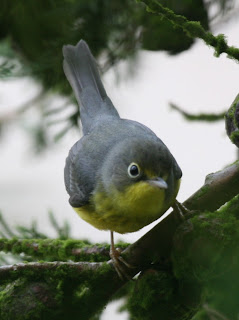 headed Vireos showed up on the 9th along with a Canada Warbler. A nice wave of eastern birds arrived on the 10th, but nothing too unusual except for a briefly seen Bay-breasted Warbler. The next day from the lighthouse, two of us got great looks at 3 Chimney Swifts flying below us. We also had the island high count of Ovenbirds with 5. On the 13th, 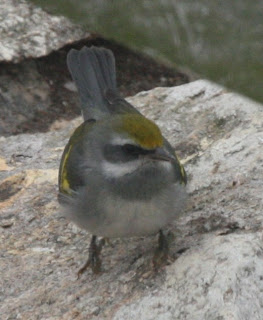 we were lucky to catch and band a Merlin (a female taiga). A few minutes later we found a Yellow-billed Cuckoo in the cave on the back side of Corm Blind Hill. A crew change the next day brought a truly spectacular fallout with 103 species of migrants and at least 8 more resident species for a total of 111 species. Highlights for the day were Golden-winged and Virginia's Warbler at the lighthouse, another Baird's Sparrow on the Terrace, a Mourning Warbler in the Heligoland Tree, and 2 Black Swifts over the lighthouse. The highest species count for the island, set back in the 1980’s, was 117 during late October.


On the 15th, an intern was doing an area search at Sea Pigeon Point and had what appeared to be a 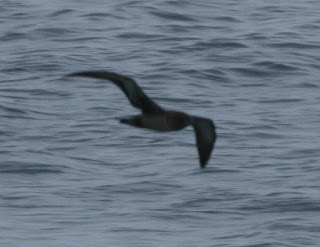 dark-morph Wedge-tailed Shearwater (1st island record if accepted by CBRC) fly in off the ocean and fly several laps over his head. The bird flew with deep, languid wing strokes that were reminiscent of a frigatebird (a good characteristic for this species). It appeared long 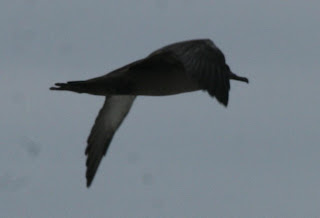 -billed and long-tailed, but its tail length was difficult to judge because it was molting its central rectrices. There are only seven records of this tropical species for California. There is some debate, though, as to the ID of this bird because its plumage looked very similar to that of a Sooty Shearwater. 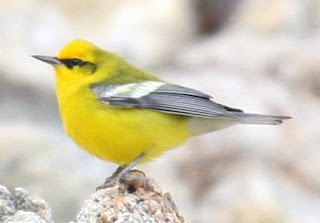 On the 17th, we found the island's 2nd Blue-winged Warbler on Corm Blind Hill. It was a neat looking bird in that it probably has a bit of Golden-winged genes in its distant past. The mask extended back a little further than a typical BWWA with a little downward curl at the posterior end of the mask. Other than that, it looked just like an adult male BWWA. Amongst the small wave on the 20th was a Black-throated Sparrow and a Vesper Sparrow. We've also found a few other odd birds such as a hybrid Blue-winged Teal x something, and a Western Kingbird with a huge bill and strong face pattern.

In addition to birds, the calm conditions we experienced also brought migratory hoary bats out to the island. Calm conditions combined with a new moon often bring bats in September and we found 10 on the 10th.

Lately, we’ve been recording numerous whales around the island. From the 17th to the 20th there was a large feeding flock consisting of thousands of shearwaters and dozens of humpback whales. The humpbacks were frequently observed breaching and fin slapping. As if in response to this loud commotion, whales were frequently observed traveling towards the feeding flock. I wonder if the breaching and fin slapping whales are communicating the food news to others to help them cooperatively hunt their prey.

In the future, if the internet is working, we will try to provide daily updates of bird migration and other stuff we’re seeing. Yesterday was a foggy day that did not allow many birds to find their way to the island. The only arrivals were a Great Blue Heron, Western Wood-Pewee, Red-breasted Nuthatch, Townsend’s Warbler, Common Yellowthroat, and a Fox Sparrow.