Sharing its origins with the core of the Sierra Nevada Mountains, the Farallon Islands were violently shaken free from the mainland some 10,000 years ago. In the ensuing years the Farallones have drifted northwest as a result of movements from the Pacific Plate and currently reside 27 miles west of the Golden Gate and 20 miles southwest of Point Reyes. As such, an unlikely inhabitant has hitched a ride on this slow but steady drift. 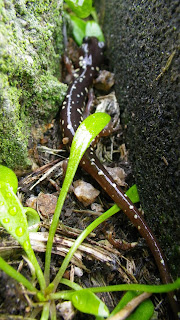 The arboreal salamander, Aneidis lugubris, is a California near-endemic, occurring in coastal and interior oak forests from Humboldt County, CA to northern Baja California, Mexico. The arboreal salamander is also found on the Farallones and is in fact the only native terrestrial vertebrate inhabiting the islands. The distinctive spot pattern of the salamanders on the islands led Van Denburgh (1905) to consider the population as a sub-species A. lugubris farallonensis.   Currently, the Farallon population of arboreal salamanders has become a subject of study on the islands.
PRBO biologists have been checking for the presence of salamanders bimonthly since 2007 under cover boards, which are used both to provide burrowing habitat and to permanently mark study plots. Arboreal salamanders exhibit high site fidelity, and we often find the same animals under particular cover boards. Individuals are measured, weighed, and sexed by looking for eggs in a female's translucent belly or the male’s distinctive mental gland under the chin, involved in pheromone production.

These salamanders possess unique spot patterns much like finger prints on humans which allow biologists to track them over time. A photo database of captured salamanders has been created for long-term mark-recapture monitoring. Some individuals are quite easily distinguishable by anomalies such as missing limbs or extra digits. The project is ongoing and we hope to learn much more about the life history of this interesting creature.
According to research conducted on the analogous mainland population, the arboreal salamander is relatively long-lived and slow to mature. This group of salamanders has no aquatic larval stage - eggs are laid in terrestrial nests and hatchlings resemble miniature adults.  They are primarily nocturnal, foraging for small prey such as spiders, beetles, grubs, ants, and centipedes on the ground or on the trunks of trees.  During the day they remain under rocks, decaying logs, and in stone walls and crevices.  Arboreal salamanders are unusual in that they have enlarged toe tips and a prehensile tail adapted for climbing, which serves them well in their habitat on the mainland. However, this adaptation may not fare so well on the Farallones, seeing how trees are few and far between.
So why is it important to study these wet, slimy amphibians that spend much of their time underground? Many salamander populations around the world currently are experiencing threats from chemicals, infectious diseases, global warming and increasing climatic variability.  In particular arboreal salamanders are lungless and offer unique attributes that make them good indicators of ecosystem health. Respiration and osmoregulation through moist, well-vascularized skin make them vulnerable to changes in water or air quality.  Baseline demographic data are helpful in documenting effects of existing and future threats to salamander populations. By obtaining data now and continuing to monitor into the future, we hope to be able to use salamanders as indicator species and possibly make predictions about bigger picture items.