The Observation Blind: A Farallon Biologist’s Home Away From Home

Here on Southeast Farallon Island, we have several blinds from which we can observe and monitor the breeding activities of various species. These small buildings allow us to observe the Farallon wildlife, conduct studies, and collect data without causing any disturbance to the birds. They hide us from the birds and shelter us from the weather (somewhat anyway). They also provide spectacular panoramas as well as the opportunity to get close up views of some very interesting animals. Come along for a tour of these blinds and have a peek out of their windows to see what’s going on out here during the seabird breeding season. 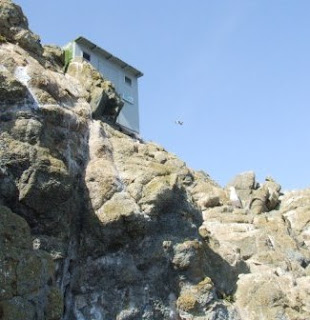 The Murre blind sits above Shubrick Point on the northeastern side of the island. Located 120 feet above the crashing surf, the blind is constantly buffeted by strong northwesterly winds and is often a very cold and windy place to work. During mid-summer, while most people are doning their shorts and tee shirts the biologists working in the Murre Blind are reaching for their long underwear, hats, gloves, and extra layers of fleece. The birds however prefer these conditions and this blind provides an excellent vantage point from which we are able to observe the breeding activities of approximately 15,000 Common Murres.

Our main study plot on Upper Shubrick Point contains about 300 breeding pairs of Murres. Many of these birds have been fitted with unique color band combinations so that individuals can be followed throughout their lives. This information allows biologists to study survival of individuals over time, determine site and mate fidelity from year to year, understand the roles each sex plays in rearing the chick, and determine chick feeding rates among other things. Farallon biologists will typically spend 4 to 6 hours a day observing this plot to determine breeding success and diet of murres. 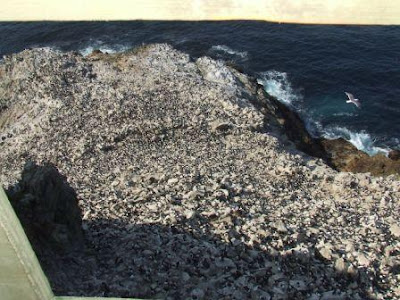 View from the window of the Murre Blind looking out over Shubrick Point at the murre colony. 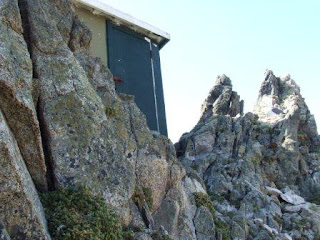 Located on the west side of the island and perched atop the narrow ridge of Corm Blind Hill, this blind is primarily used for the study of ....yup, you guessed it, cormorants. Several studies require researchers to spend considerable amounts of time here monitoring Brandt’s and Pelagic Cormorants as well as a modest colony of approximately 800 Common Murres. Much like the Murres in the Upper Shubrick study plot, many of the Brandt’s Cormorants have been banded so that we can monitor the breeding success and survival of individuals over many years. However, since these birds are banded as chicks, it is possible to obtain information on survivorship and the role that the age of a bird plays in its reproductive efforts and success. 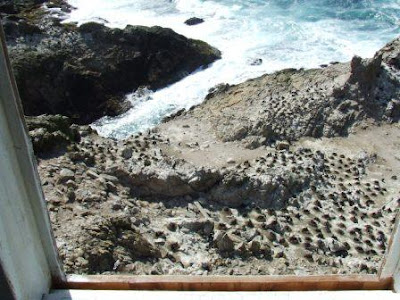 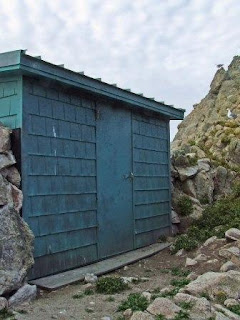 Leaving the Corm Blind and heading northward on the island we arrive at the brand new Sea Lion Cove Blind. Equal parts form and function, this blind is entirely clad in copper and is the culmination of a unique partnership between PRBO, USFWS, and Meadowsweet Dairy, a group of local artists who specialize in creating wildlife habitat through art. Once again, Brandt’s Cormorants are the main attraction at this spot located just across Seal Lion Cove from the Corm Blind. This blind is unique, not only for its appearance but for the fact that it also creates breeding habitat by providing ledges for Murres and shielding both Murres and Corms from our daily activities allowing them to colonize new areas. 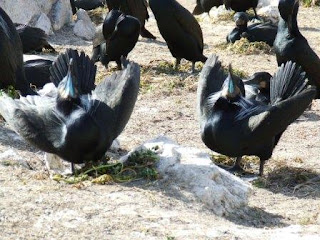 An added benefit to the location of this blind is that it affords excellent photo opportunities such as this picture of two Brandt's cormorants displaying over a few scraps of nesting material. They are competing to attract a mate by fluttering their wings and showing off their bright blue throat.

These blinds provide us with the opportunity to get close enough to the breeding seabirds to observe their behavior and collect data about their reproduction, diet, and survival while also hiding us from view and protecting the seabirds from disturbance. During the summer months, we probably spend as much or more time in these blinds as we do living in the houses on the island and that is why we think of them as our home away from home.
No comments:

Return of the Cassin's Auklets

If I asked you to name a sure sign that spring had arrived, egg laying by a krill eating seabird that nests underground likely wouldn't be your first choice. But on the Farallones, Cassin's Auklets mark the beginning of a wave of breeding at the largest seabird colony in the contiguous United 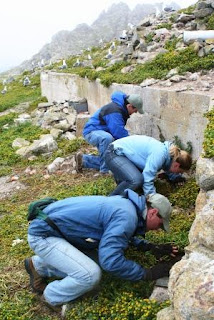 These diving birds are Alcids, related to Murres and Puffins, and while they can fly in the air, they are much more graceful "flying underwater" by pumping their wings in pursuit of their favorite prey: krill. The past 2 years were not good ones for Cassin's Auklets, they failed in breeding in both 2005 and 2006 - unprecedented in our over 35 years of continuous research on Farallon seabirds. While these birds normally lay eggs in underground burrows they dig with their feet- we follow their breeding activities in nest boxes which act as artificial burrows. Here we are checking some boxes for nesting auklets. 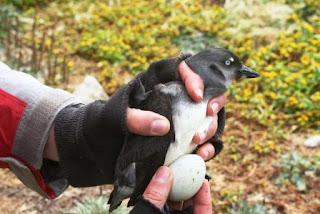 It seems that major changes in upwelling and ocean currents in the last 2 years meant very little krill available at the right time for breeding auklets. Fewer bred, later in the year, and most abandoned their eggs. But so far for 2007, there is good news! We are seeing auklets breeding in good numbers and incubating their eggs. 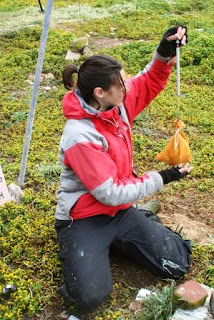 This year auklets are breeding in the majority of our study boxes. For the most part, both parents are regularly incubating - which was not the case last year. We have also noticed that birds appear to be heavier, and therefore in better condition, this year than the last 2 years. Here is a picture of an auklet being weighed by intern Caroline Poli. We hope that the return to a "normal spring", with many breeding Cassin's Auklets will signal the beginning of a productive seabird season. As krill feeders lower on the food chain than other seabird species, these birds often act as a "early warning system" for the ocean conditions we are likely to see this summer. So far things look good and once again nights on the Farallones are filled with the mysterious shrill cries of the auklets - think crickets on steroids. Ahh.. spring has sprung....
2 comments: