The Battles Have Begun 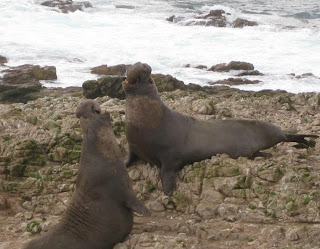 With the arrival of the first (and so far, the only) pregnant elephant seal cow on Sand Flat – Drip, a 16-year-old cow born on SEFI in 1992 (see photo below of Drip with some amorous young subadults pining after her) – the battles between the males have started. 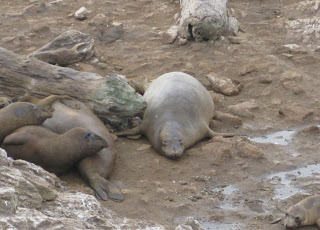 Mauricio was the first bull to arrive. He lost a brief fight to Salvatore (see photo above; Mauricio is on the left) and is hanging out on the marine terrace. Rusty started off in , then pushed Salvatore onto Last Resort, and now is defending Drip on Sand Flat. However, we are waiting for the big battle between these two alpha bulls. Last year, Salvatore was alpha on Sand Flat and Rusty dominated . Who will take Sand Flat – the ultimate prize – this year? In other news, Don Quixote currently is holding , and Bogs is nursing his wounds on Mussel Flat.

We also have resighted 2 of last year’s weaners that survived their first difficult year at sea. This immature below was born on the marine terrace of Sand Flat last year, and has returned for the fall haulout. 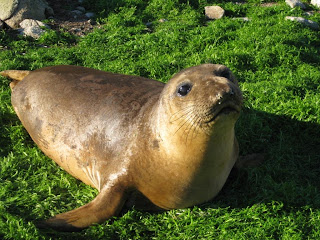 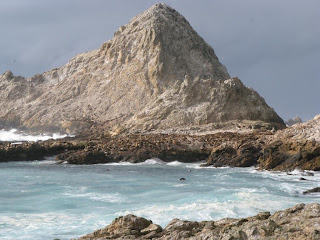 It started when cormorants began nesting on the marine terrace of Sand Flat and (the primary northern elephant seal areas on SEFI) in spring and summer 2007. To prevent disturbance to these seabirds, PRBO biologists stopped checking on the northern elephant seals to read tags in this area during seabird breeding season and into the fall. This lack of human presence coincided with the highest counts of sea lions in the history of the refuge. More than 1,000 sea lions and 20 threatened Steller sea lions took up residence on Low Arch Terrace, , Last Resort, and the Marine Terrace.

It is one of the many success stories of the : the return of animals to an area once human pressures are removed. Common Murres were once reduced to fewer than 5,000 on these islands, starting with the Farallon Egg Company stealing tens of thousands of murre eggs to feed gold miners in the in the mid-1800s followed by decades of disturbance by the lighthouse keepers and their families. Today, 35 years after the Farallon National Wildlife Refuge was established and most human pressures were removed, 180,000 Common Murres breed on SEFI. Northern fur seals are giving birth to their pups once again on nearly 100 years after they were extirpated by Yankee and Russian sealers. Today, the sea lion population is thriving. 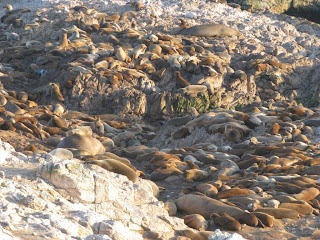 The first priority of the U.S. Fish and Wildlife Service and the Farallon Wildlife Refuge is the protection of wildlife. Therefore, the presence of sea lions, especially federally threatened Steller sea lions, on SEFI’s main elephant seal breeding beaches means that PRBO biologists had to modify traditional research protocols. Sea lions here are sensitive to people and easily scared into the water. Thus, instead of walking amongst the elephant seals and stamping them with bleach numbers, we are watching from afar through scopes, reading tags and trying to identify as many individuals as possible by their unique scars. We also census all the age classes twice a day. Although we won’t be able to identify most individual cows, we can still monitor overall reproduction and population size.

It will be a different year for the elephant seal research program. But we can all celebrate in the thriving wildlife populations of the , one of the most biologically rich marine environments in the world.