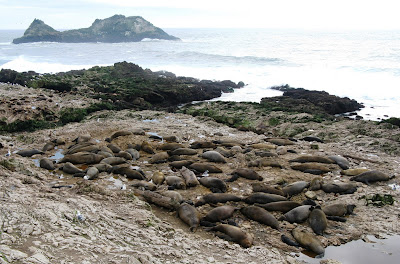 The last days of January are the peak of the northern elephant seal breeding season on the South Farallon Islands. Most cows have already arrived and given birth on the rookeries, which echo with the sounds of cows calling to their screaming pups and males bellowing to intruders. We can hear the cacophony all the way up at the PRBO house! SEFI's Sand Flat (pictured on the left), where Rusty is the reigning alpha bull, currently has 73 cows, 52 live pups (9 dead), and 2 weaned pups, including the cow Daniela's weanling. The Marine Terrace colony has 15 cows, 11 live pups (1 dead), and 2 weaned pups, including the cow Shaye's weanling, with Flaccido Domingo the alpha defending this harem. Mirounga Beach, where McHammer is alpha male, has only 4 cows and 2 pups, after last week's massive storms washed out 3 pups and forced 16 cows up to Sand Flat, including the cow Aprile and her pup who are doing fine! On West End, 8 cows and 5 live pups are at Pastel Cave Highlands, defended by Felipe, and 10 cows, 4 live pups (3 dead), and 1 weaned pup are on Shell Beach with Bedlam Boy as alpha bull. 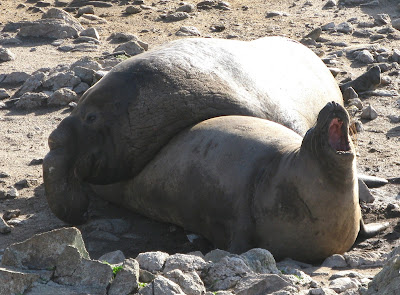 Flaccido Domingo claims the cow Carmen, in a display to a male challenger.
Northern elephant seals are fascinating in their ability to live off their blubber for long periods of time, a critical part of their life-history strategy. Called 'capital breeders' because they feed their pups entirely from their stored blubber reserves, adult females fast the entire time they are nursing their pups, about 30-35 days. 'Income breeders' like California sea lions must leave their pup on the beach occasionally to forage for more energy to maintain themselves and their growing pups. By not having to forage while nursing, the elephant seal cow transfers a great deal of milk energy to her pup in a short time. This allows her to wean the pup quickly and return to sea to prepare for future offspring by foraging on her own without encumbrance. The largest breeding males fast for more than 100 days, allowing them to be vigilant in fighting and defending their harem of cows from other male challengers, and then mating with every receptive female as their reward. Weaned pups live off their blubber for several months while they learn to swim and dive before first heading off to sea to forage. 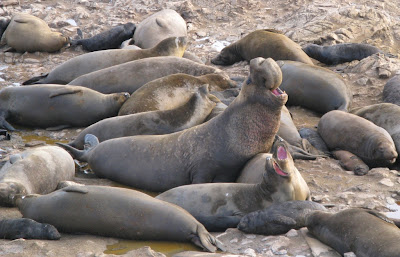 Rusty bellows a warning to a male attempting to intrude on "his" cows. 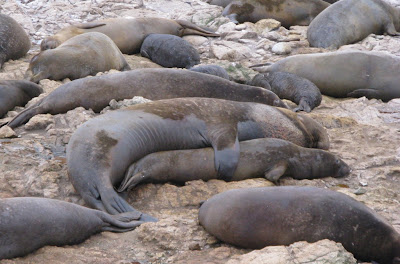 Rusty's reward for defending the harem is to mate with >70 receptive females!
Given that elephant seals must live entirely off their blubber while on land, it is no surprise they spend as much time as possible sleeping. Elephant seals undergo sleep apnea (holding their breath) for up to 25 minutes, enabling them to reduce water loss from respiration and to slow lipid metabolism - the only source of water for a fasting seal. 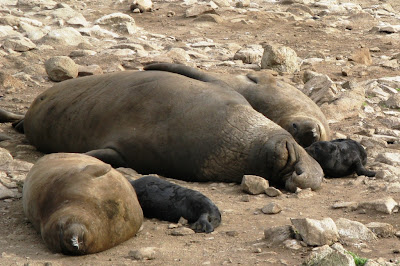 Cows, pups, and a bull sleep long hours to save water and energy. 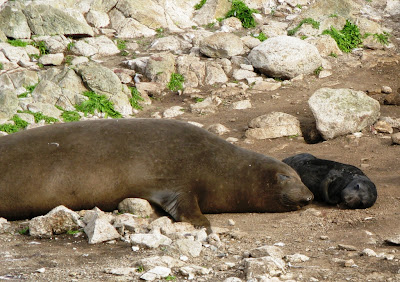 Cows do not eat for 35 days or more while transfering milk energy to their rapidly growing pups. 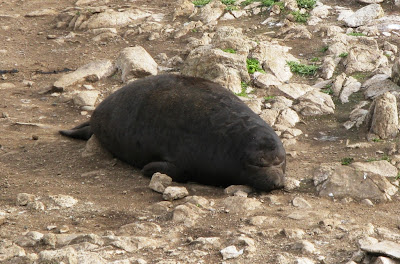 Weaned pups live off a thick layer of blubber while learning to swim and dive.
1 comment:

The Farallon Islands have been pummeled by a series of major storms over the past few days. The massive swells crashing into the island are awe-inspiring and the intermittent heavy rains are filling our cistern with much-needed drinking water to last PRBO biologists the rest of the year. 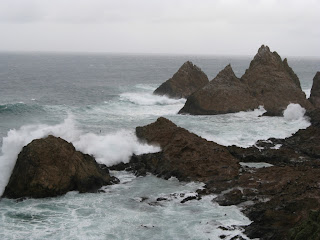 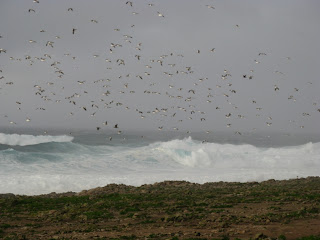 The huge waves - especially at high tide - wreaked havoc in our elephant seal breeding colony. Mirounga Beach and Log Channel filled completely with water. Just prior to the storms, Mirounga Beach had 16 cows and 5 pups. Once the storms hit, we thought all pups there were washed out. However, yesterday we spotted 2 tenacious pups still alive and attempting to move to higher ground! Many of the Mirounga Beach cows moved up to the protected Sand Flat, bumping up the population on the flat from 50 to 62 cows over just 2 days. 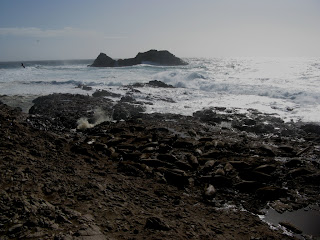 The storms are expected to last a few more days, with a break over the weekend and then more rain next week! Luckily the new blind on the hill overlooking Sand Flat not only hides us from the skittish California sea lions, but also provides us some shelter from the elements while we continue to monitor the elephant seals every day, rain or shine.
No comments:

During this morning's lighthouse watch, I saw 20 Orca swimming west of the island, headed southeast.
5 big males were in the group and perhaps 4 juveniles.
Very exciting!
No comments: 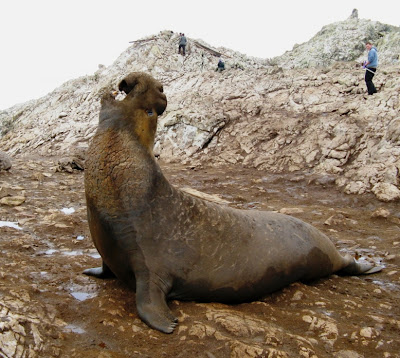 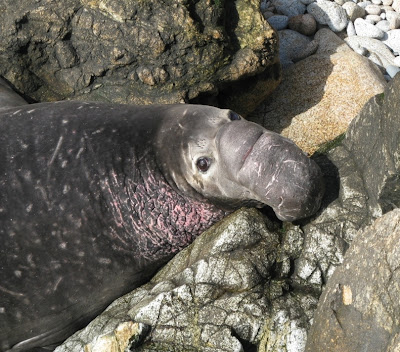 Pink chest shield and large nose on Bubba.
Winter marks the season of bull battles as males compete to dominate the harems of females who have come ashore to give birth, nurse their pups, and breed. Rusty, our alpha bull last year, has returned and is holding the Sand Flat harem again, with 15 cows as of January 3, including Daniela, Kyra, Eone, and Lodi, and 7 pups. Kyra and Eone were both born on SEFI in 1999. 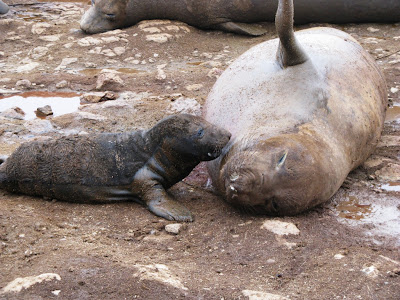 Kyra with her newborn pup on Sand Flat.
Flaccido Domingo is the beta bull on Sand Flat. Time will tell whether he challenges Rusty for the top spot. 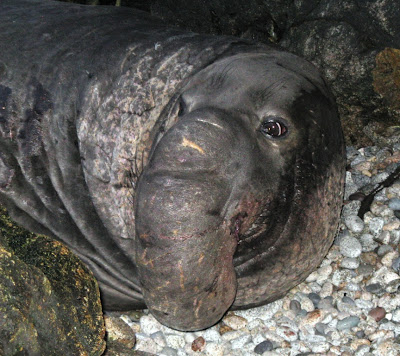 Flaccido Domingo is second on Sand Flat, but wary of mighty Rusty.
Speaking of challenging for the top spot, the bull Bubba attempted to do so on December 31, leading to his demise. Rusty killed Bubba in a brutal, hour-long battle in which Bubba got stuck between two rocks in Log Channel Beach. This happened to Nero in 2007, when he was killed by Don Fransisco after getting wedged between the same two rocks. 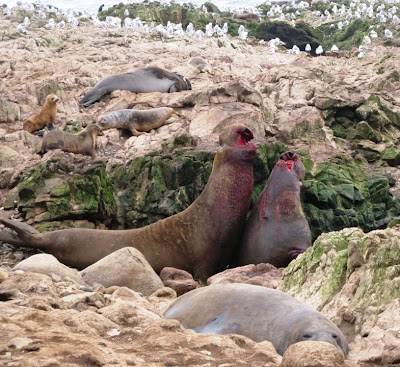 Rusty and Bubba battle in Log Channel Beach.
Most elephant seal fights do not end in death, but occasionally when two bulls are closely matched, the winner will continue to batter the loser until he is permanently eliminated. The battle was a sobering reminder to PRBO biologists of the realities of nature and that life itself is at stake for these animals. You can view a part of the battle below, but be warned that it is not for the faint of heart.

The harem on the Marine Terrace of Sand Flat is small but growing. There are currently 3 cows and 2 pups, including new cow Shaye. McHammer, not quite a bull, is dominating this harem. He is 9 years old, born and tagged on the Farallons in 2001. 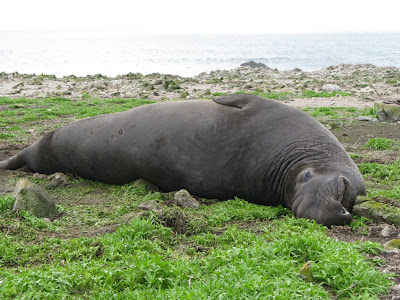 McHammer on the Marine Terrace.
Mirounga Beach has no pups yet, and cows so far have been just passing through. Felipe, nearly a bull, has been seen in Mirounga Beach. Similarly sized Mein Gott is biding his time on Lower Arch Terrace. McHammer, Felipe, and Mein Gott are known as "SA4" seals, or 4th-year subadults. The next step up is a bull.
No comments: