What is that MUSKY smell?

SEFI is bustling with many smells… 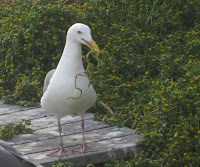 the fragrance of blooming weeds, 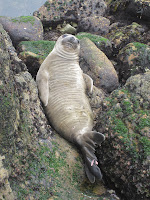 the fetid whiff of marine mammals, 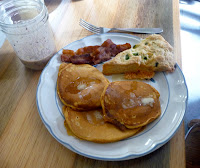 the ambrosial scents of a Sunday brunch,


the putrid smells of seabird guano, the tantalizing aroma of Jen’s fresh baked chocolate chip cookies, and many more. But, of all the myriad smells we experience daily on this island, my favorite is a dirty musk that fills my nose when I enter the Habitat Sculpture, crouch down near a small rock crevice, or sweep the northeast corner of the Carpentry Shop. I like it because it reminds me of an Ashy Storm-petrel…
﻿﻿﻿ ﻿These aromatic seabirds are the size of a swallow but have the ecology of an Albatross. They spend most of their lives at sea, are strong fliers and are long lived. Storm-petrels are members of the order Procellariiformes and easily identified by the tube on top of their bill, which gives rise to the more common moniker for this group, “the tubenoses”. This tube aids storm-petrels in both olfaction and the ability to excrete excess salts.
Ashy’s are found only between S. Oregon and N. Mexico and are a species of special conservation concern in California due to a small global population. In fact, half the world’s population of this diminutive seabird lives on the Farallones, making the Farallones a critical colony for monitoring and conserving this species. Unfortunately, the Ashy population significantly declined since the 1970’s when PRBO began monitoring them on SEFI and the future status of this species remains uncertain.  Like most seabirds, Ashy’s are vulnerable to the effects of a changing ocean climate which may affect the abundance and distribution of their primary food, mostly krill and other small zooplankton. Other major threats to Ashy’s on SEFI include predation by Burrowing Owls and Western Gulls and habitat change, specifically increases in non native grasses.
Most of my work on SEFI is accomplished during the daylight hours, but, last week, for the first time this season, we also did night work. The crew worked until a grueling 2:00AM mist-netting for Ashy Storm-petrels. Because these birds are primarily nocturnal when they are at the colony, this is the only way that we can capture and band them. By banding Ashy Storm-petrels PRBO hopes to determine population size, status and survival of adult birds. To attract Storm-petrels to the mist net we played vocalization of adult birds, you can listen to an Ashy vocalization by clicking below:
Lying down on a bed of rocks beside the net we waited for the birds to fly in. Ashy’s can wriggle out of the net pretty quick so once in we rushed to extract them. My first Ashy extraction went smoothly. And while the Ashy’s bite did not leave a mark like the Cassin’s Auklet, the Ashy did regurgitate a highly concentrated oil that left my hands reeking of the remindful musky odor. This oil is an important nutrient rich food for their chicks. The night brought us a total of 28 Ashy Storm-petrels including one recapture.
﻿﻿﻿﻿﻿﻿﻿﻿﻿ ﻿
Later this season I will help study the breeding success of Ashy’s on SEFI. To do this I will suit up armed with a burrow camera, aka the SeeSnake, and traverse the island visiting known burrows. Ashy Storm-petrels nest in small cavities in rocks and crevice in some of the human created structures on the island. Each burrow is marked with a yellow stake and number. The holes are so tiny that we use the camera to peer in. We hope to find adult birds, eggs, or chicks.
﻿﻿﻿﻿﻿﻿﻿﻿﻿﻿﻿﻿Ashy Storm-petrels are amazing seabirds that travel over 300 kilometers each night garnering food to feed themselves and their chicks, but their population is declining. PRBO biologists on SEFI hope to learn more about this unique species to help conserve it. Even though the musk of an Ashy is not as sweet as the Egyptian Musk oil I sometimes wear when I am on the mainland, I will always flash a smile when I get a whiff, because it means an Ashy Storm Petrel is near.
1 comment:

New Farallon photo project by Annie Schmidt. Check it out!

The Birds Have Arrived!

The seabird breeding season on the Farallons has begun! We’ve been watching Common Murres, Brandt’s Cormorants, Cassin’s Auklets, and Pigeon Guillemots arrive to the islands, as they do each spring/summer season.

The first birds to start nesting were the Cassin’s Auklets. These are cute little seabirds that hang out at night on the island (safety from the cover of darkness) and spend the day at sea or at their nest. 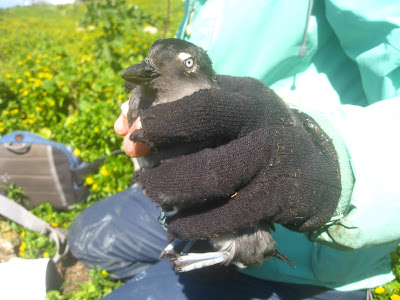 Their nests are burrows in the ground that usually consist of a long tunnel with a turn right before the actual nest. Cassin’s Auklets will also nest in crevices in rocky habitat. We want to be able to collect data on these birds that breed on the Farallons as a way to monitor the health of the population. Parameters such as reproductive success, timing of breeding, and chick growth and development can be used to accomplish this, and this data can easily be collected by simulating the nest environment using nest boxes. We make the nest boxes out of plywood and construct a tunnel using PVC pipe. The top of the box has a removable lid that allows us to see inside the nest and collect the data.

We are able to look at both mates of a nest because Cassin’s Auklets take turns incubating the egg each day. In most cases, if you find a bird in a box one day, the next day you should find its mate. Checking a nest box is an interesting task. First you must completely block the entrance to the tunnel using your foot or knee so that the bird can’t escape. At the same time you must be able to bend over and peer under the box lid. It’s a bit like doing yoga. If a bird is present, you need to grab it in one swift movement to avoid hurting the egg or the bird. A biologist here described this as being not unlike an alien abduction. Imagine a bright light as the roof of your home opens up, you are snatched up, measurements are taken and you’re returned with a metal band on your ankle. I try to keep this perspective in mind when I’m holding a Cassin's and its beak is clamped down on my fingers or its claws have lodged themselves under my cuticle. I also know that the collection of this data will aid in monitoring these birds. 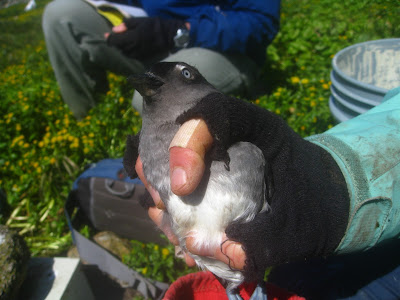 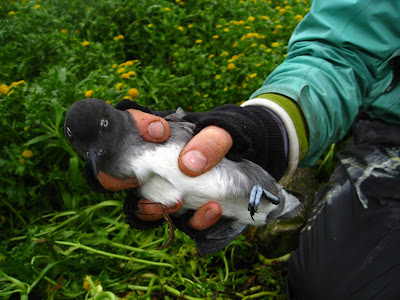 We can track specific individuals in a population by putting a metal band around their leg with a unique number for each bird. We know the ages of birds that we banded as chicks, and we always check band numbers to see if a bird we find is one of known age. We also band birds that are mates of known age birds.

When known age individuals are found, both they and their mates have condition data recorded. This includes measuring the bill depth (used to sex the individual), wing cord length, weight, and egg size.


We have over 400 boxes that get checked every 15 days as the breeding season progresses. Our first check yielded about 70 birds and our second yielded about 150 additional birds! We continue to check the boxes without birds in them through the summer to see if any new Cassin’s Auklets decide to move in. Each time I lift the lid of a nest box is like a surprise. Will there be a Cassin’s Auklet? Will there be another species of bird? Will there be an egg? Two eggs?? Fortunately, there are over 400 surprises out there waiting for us.
1 comment:

In mid March, after 3.5 months on the island, the winter crew departed in one of our seasonal crew switches. It is now seabird season, and the seasons of wildlife have changed with the weather. After a very wet March with storms from the south, clear skies, and strong northwest winds have returned, as you can see from this video today of Saddle Rock on the south side of the island.
Elephant Seal cows and bulls have departed, leaving their weaners here on the island. Most will enter the ocean soon ﻿for the first time and depart the Farallones. Cassin's Auklets, the small burrow nesting and krill eating seabirds that our one of our focal species, began nesting in early March. The discovery of the first egg in a nest box on March 2nd was the earliest we have ever recorded. Common Murres, Western Gulls, Pelagic Cormorants, and now even some Brandt's Cormorants, are attending the island in preparation for their breeding seasons.
Spring is characterized by strong northwest winds, which help drive productive upwelling which feeds the Farallon food web. Today's 35 knot winds are typical for this time for year on the Farallones. The video below shows what it's like walking to the north side of the island during these conditions. I'm trying to hold the camera as steady as I can!
These conditions can whip the ocean up into foam, check out "Farallon snow" at North Landing!
Stay tuned for regular posts from the Farallon seabird season...
No comments: