The Tufted Puffins of the Farallons

Imagine yourself as young tufted puffin. You have been on the open ocean since you first left the cozy crevice where you were born on the Farallon Islands. You’ve fished for food, diving and swimming underwater; slept on the ocean; and ridden out winter storms. Now it’s springtime and you’re looking good, you’ve grown long blond tufts on your black head. The tufts sweep back from your crisp white eye patch. Your beak has enlarged and turned bright orange, and your body has turned a dapper black. This is your first year to return to the island, the first time you will stand on land after three years in the rough North Pacific Ocean. This year you will find a lifetime mate and a home for your own family on the steep cliffs of Farallon Island. 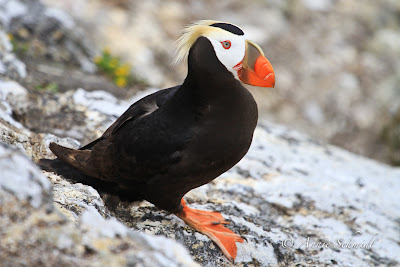 In the beginning of April each year, the tufted puffins return to the Farallons. They’ve been at sea all year or as in the case of our first time breeder 3 years.The older birds that have been here before return with their mates to their prior breeding sites to attempt to raise a chick. These sites are all natural crevices in the rock, usually quite narrow and longer than the reach of the human arm.The puffins pull dry grass from the slopes and bring it into the nest site deep inside the tunnel. The male and female spend time outside their site renewing their bond - standing hunched over, facing each other with their bills together, flipping their heads back and fourth. 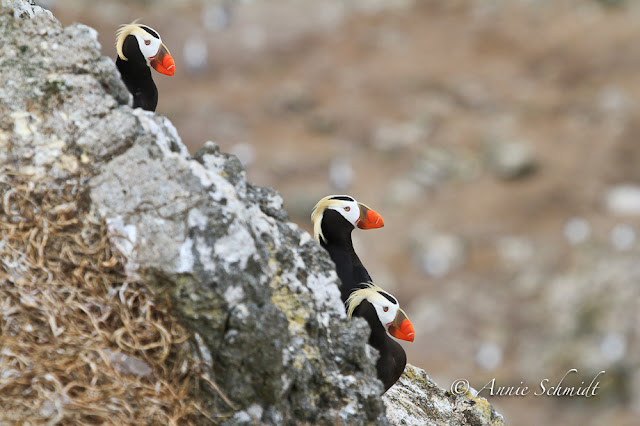 After billing they fly out to sea, where they will copulate and begin making that egg. The female lays a single large egg, and for the next 45 days the pair will take turns incubating. Once the egg hatches, the parents bring fish to the chick for another 45 days. So 90 days after the egg is laid, the chick fledges and flutters off the cliffs to the ocean. This is a very long incubation and nestling period for a Farallon seabird, an adaptation perhaps to variable food supply during a breeding season. 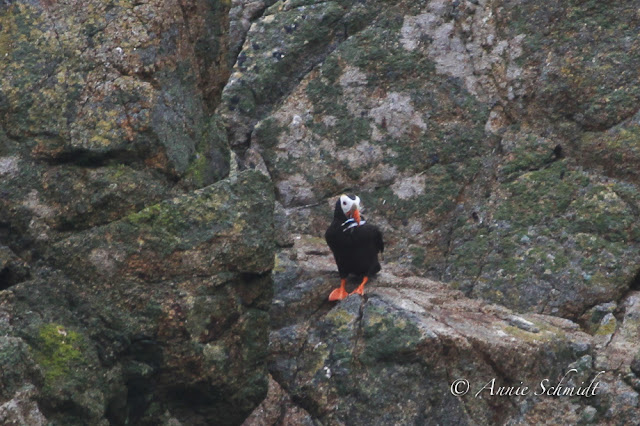 Young puffins coming to the island for the first time since fledgling fly around in groups of 5-10 birds. They compete for mates on rocky outcroppings and then investigate possible crevices with their new partners. The first year on the island the pair spends time loafing, sleeping and preening at their chosen site. Next year when they return they will come with their mate to the site they have found this year and begin the breeding cycle. 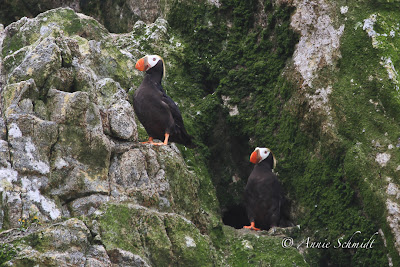 The Farallons, are the southernmost breeding colony for Tufted Puffins. It is a small tenacious group of 70-150 breeding birds that have been monitored for over 20 years. The puffins face challenges of variable food supply and warming sea surface temperatures. They have responded with boom and bust cycles, not breeding during poor food years, as well as breeding later than in the past.

Nonetheless, the puffins are a lively and joyful sight each spring and summer when they soar over the island and perch on the cliffs. They continue to return and maintain their life rituals on the Farallons, a unique and wonderful seabird we are lucky to have our offshore waters. 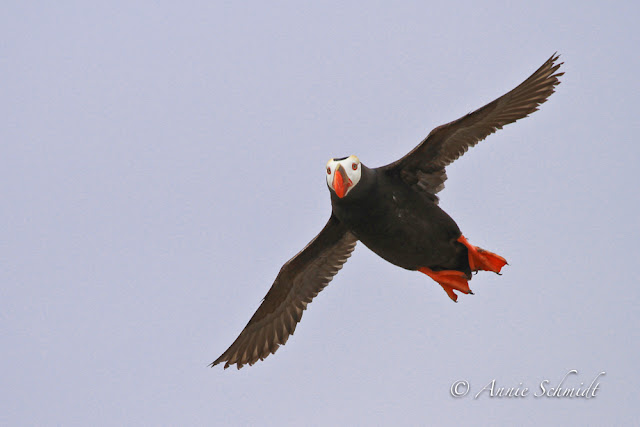 Text by Else Jensen
Photos by Annie Schmidt
2 comments:

Get your daily photo fix

After two weeks off, Farallon Photo a Day is back!
No comments: 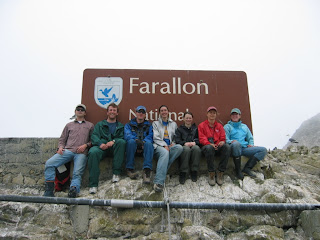 Farallon Seabird Crew 2007
On June 7th, 1967, C.J. Ralph and John Smail became the first PRBO biologists to overnight on the Farallones. They spent 4 nights on the island, as guests of the Coast Guard who were still permanently stationed here. I'm sure these biologists could not imagine the idea that PRBO would have a continuous presence on the Farallones from April 3rd 1968 to the present day.

We often focus on the research and conservation efforts of PRBO's 40 years on the Farallones, but we can never forget that lots of hardworking people have made this happen - be they PRBO Farallon Biologists, volunteers, USFWS staff, outside researchers, or contractors etc. From 1967 to April 30th 2011,  1405 people have been fortunate enough to spend at least one night on the Farallones, working with PRBO or USFWS activities. Most time has been spent by PRBO biologists and volunteers, who now spend at least 6 weeks at a time on island stints. Back in the late 1960's and early 1970s, Some PRBO biologists spent well over 200 days a year on the island.

Steve Morrell crossing Jordan Channel 1977
Though much has changed in the Farallon ecosystem over 4 decades, what has not changed is the role the Farallones has played in shaping multiple generations of biologists. The first photo below is of Farallon Biologist Ron LeValley with a Cassin's Auklet chick in 1977. Below him is volunteer Matt Barbour, also with an auklet chick, but in 2007. 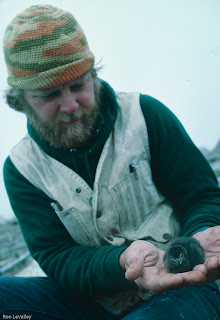 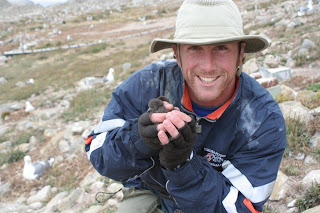 Within a field season, many volunteers spend multiple months on the island, often with an occasional 2 week break. This long term staffing helps to create better scientific data, as well as excellent experience for up and coming scientists to learn from. In addition, many Farallon biologists have spent many years working on the island, as we all feel very strongly connected to our work, this incredible place, and the amazing passionate and committed people one finds out here. 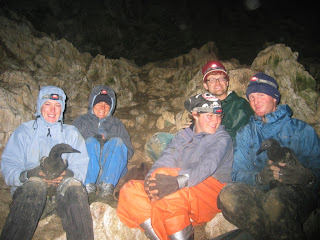 Brandt's Cormorant Banding 2006
So the next time you ponder the Farallones, remember all the people whose hard work and dedication has made our unique program a reality. Below are the 22 men and 3 women of the the Farallon "Top 25", in terms of numbers of nights spent on the island during PRBO's tenure, as of April 30, 2011. ID# shows where an individual fits in in the PRBO Farallon timeline, as the first person in 1967 was #1. 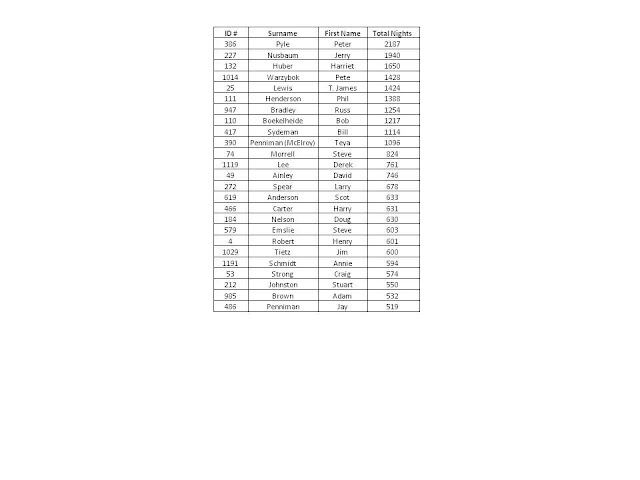