The Strange Case of the Missing Cormorants...

It was the first indication that this year would be different: there were no Brandt’s Cormorants to be found on the Farallones in April. The colonies looked like ghost towns. Now and then a lonely bird would wander through the patches of murres, but the regularly spaced nests that made up the downtown metropolis of cormorantville were missing. The lack of Brandt’s Cormorants was even more puzzling given the regular, even high attendance of other species of birds. Common Murres were attending nest sites in ever growing numbers. Cassin’s Auklet, the small krill-eating bird that typically sounds the early warning bell of change, occupied sites early and in high numbers. Wind was strong and water temperature was cold. All indications were that a highly successful breeding season would be in order. So why were the cormorants missing? 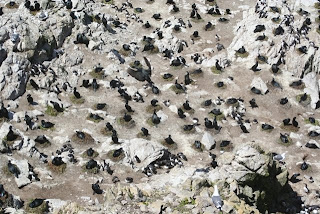 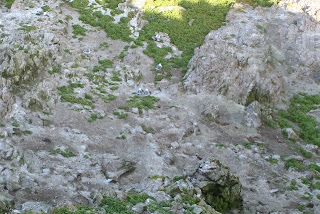 In early April, we began receiving reports of unusually high numbers of dead cormorants washing up on local beaches. The indications were that most birds appeared emaciated but not suffering from disease. It seemed birds were struggling just to feed themselves and lacked sufficient food to attempt breeding. Mystery solved? Not exactly. It simply raised another question, why would a lack of food, primarily juvenile rockfish and Northern anchovy, affect only Brandt’s? Many other seabirds on the Farallones eat the same fish, yet they seemed unaffected. Until recently that is…
For nearly three weeks, beginning in late May the wind died. The skies cleared, temperatures rose and visibility was incredible. The flat seas made for some fantastic cetacean viewing. We were able to see multiple pods of Risso’s dolphins, Northern Right whale dolphins, Pacific white-sided dolphins, Dall’s porpoise, Humpback whales, Gray whales and even a couple Killer Whales. In addition, Black-footed albatross were spotted almost daily from the island, with a high count of six in one day. The light winds favored a great land bird wave as well. During that period we had a Scissor-tailed Flycatcher, a Summer Tanager, a small flock of Indigo Bunting, several Rose-breasted Grosbeak, a Yellow-billed Cuckoo, a Blue Grosbeak, and a Bell’s Vireo (Arizona race) among many others. 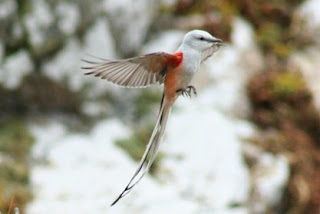 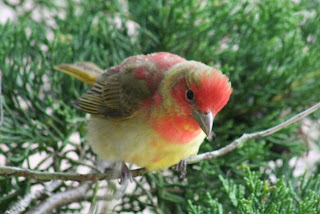 Summer Tanager
Although the warm weather and sensational visibility were enjoyed by the island biologists, it seemed to have unfortunate consequences for the breeding birds. Coincident with the decreasing wind and increasing temperatures, Common Murres began abandoning eggs and chicks in unusually high numbers. Murres almost never leave an egg alone due to the high risk of predation by gulls. This year, we have observed numerous birds simply get up and walk away, leaving their egg or chick unattended and vulnerable. A further indication of poor foraging conditions is the increase in adult murre aggression toward unattended chicks. With no parent to protect them, vulnerable chicks are being harassed unmercifully.
To add to the confusion, during this period when murres were taking a turn for the worse, Brandt’s cormorants finally appeared. Not in the volume we would expect at this time of year, but a small number of birds have showed up, set up nests and are now incubating eggs. And so the mystery continues. The unusual patterns emerging this year demonstrate once again the invaluable perspective that PRBO provides on the Farallones. This year is just the latest indication of new changes occurring in marine ecosystems. The mysteries developing from these changes can only hope to be solved by examining long-term data sets such as those from the Farallon Islands.
No comments: