The wildflowers are in full bloom on the Farallones and due to abundant rainfall this year they are particularly prolific. While the native maritime goldfields (Lasthenia maritime) and marsh and sticky sand spurry (Spergularia spp) continuously sported a few flowers throughout this wet winter, in the past couple of weeks the island has truly burst into color. The goldfields are knee-high in some areas of the marine terrace. 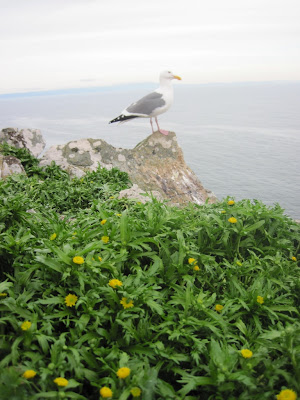 Maritime goldfields (Lasthenia maritime) is the dominant plant on the Farallones. 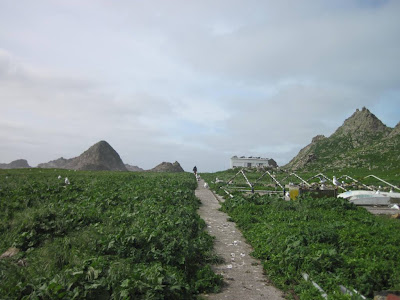 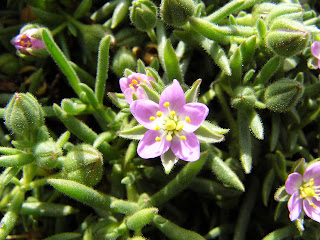 Sticky sand spurry (Spergularia macrotheca)
One of the rarest and arguably most beautiful native flowers on the South Farallon Islands is the seaside daisy (Erigeron glaucus). This lovely low-growing spreading plant has curled, velvety leaves, bright yellow centers, and lavender petals and grows mostly on rocks on the north side of Little Lighthouse Hill and on the path to the murre blind on Shubrick Point. We found this specimen blooming on the rocks above the new copper Sea Lion Cove blind. 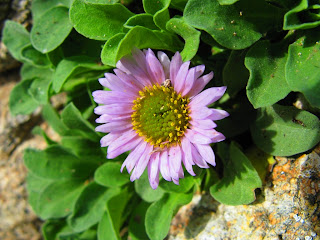 Most female elephant seals nurse their own pups exclusively until weaning, and are fiercely protective of their pups - with good reason, as the main cause of pup mortality on Sand Flat is being bitten in the head by other cows. However, some cows that lose their pups will adopt orphans and raise them as they would their own. Occasionally, some lucky pups are suckled by two mothers or are adopted by a pupless female after being weaned by their own mother. They are known in the elephant seal world as "double mother suckers", or "superweaners." These weanlings can grow to be twice the mass of normal weanlings!
Below is a movie of a superweaner on Sand Flat. The cow, named Robin Robertson, either stole this pup after losing her own, or she may have accidentally switched pups with another cow and ended up with a pup older than her own. He is so old that he has already molted most of his black pup fur, yet he continues to nurse. We have two additional superweaners, both adopted by cows from Mirounga Beach who lost their pups in the mid-January storm.
2 comments:

The only native terrestrial vertebrate inhabiting the South Farallon Islands year-round is the arboreal salamander, Aneides lugubris. The Farallones population is considered a sub-species, A. lugubris farallonensis, but is closely related to arboreal salamanders at Point Reyes peninsula. The Farallones were connected to Point Reyes 10,000 years ago when sea levels were much lower. 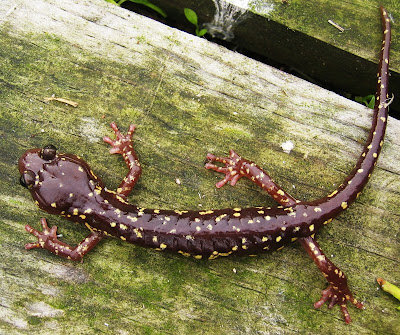 Aneides lugubris farallonensis.
On the mainland, this species is associated with oak woodlands. It is described as arboreal because of its unique ability and propensity among salamanders to climb trees: the enlarged toe tips and prehensile tail is adapted for climbing, and individuals on the mainland have been found in tree cavities as high as 60 feet above the ground!

However, trees are in rather short supply here on the Farallones - so what gives? Although its common name suggests that this salamander lives in trees, it is actually found mostly under rocks and logs and in crevices and burrows, and its arboreal tendencies may be somewhat overrated. Seabird burrows cover almost the entire Southeast Farallon Island and, together with the many rocks, provide abundant cover for salamanders. 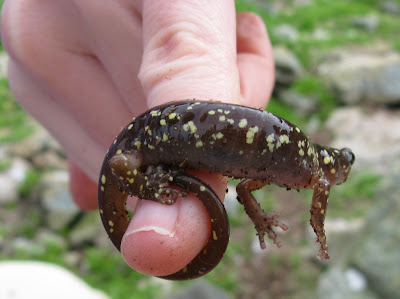 The arboreal salamander has a prehensile tail to facilitate climbing.
One herpetologist noted that "this curious genus [Aneides] is furnished with by far the most powerful dentition of any existing salamander..." Given that the arboreal salamander is the biggest species of its genus, these guys have especially large and powerful teeth, and have even been known to bite the unsuspecting PRBO biologist!

Arboreal salamanders are lungless salamanders (family Plethodontidae) that breathe through their skin. This renders them sensitive to changes in water or air quality, making them good indicators of ecosystem health. PRBO biologists initiated a long-term monitoring study of the Farallon arboreal salamander in 2006.

In the dry season from May to October arboreal salamanders retreat to burrows deep beneath the ground where they guard their eggs and hatchlings and wait for the rains to return. They are only active near the surface during the winter rainy season. When at the surface they are strictly nocturnal, emerging at night to forage for beetles, isopods, and other insects. During the day they remain in stone walls and crevices and under rocks and boards. 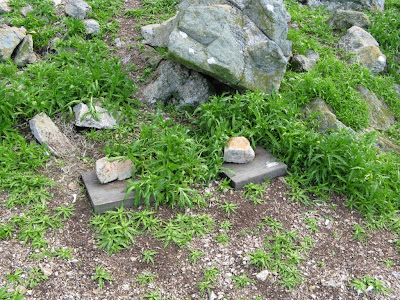 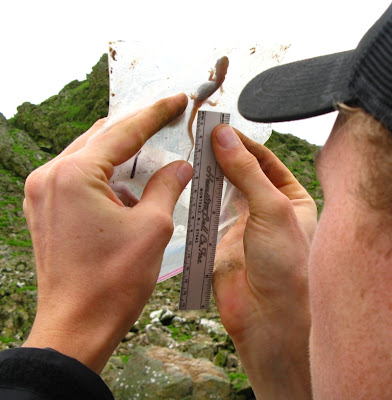 Each salamander has a unique spot pattern, allowing biologists to individually identify them.
Unfortunately, a larger proportion of amphibian species are at risk of extinction than any other group of animals. Salamander populations throughout the world are threatened by chemicals, infectious diseases, and habitat loss. By studying the Farallon arboreal salamanders, we can understand their population dynamics and hopefully ensure a future for this special and unique creature.
9 comments:

Noted elephant seal biologist Burney Le Boeuf once stated, "if you like superlatives, you will love this animal."
Consider this list from Le Boeuf and Laws' seminal 1994 book on elephant seals:

Elephant seals are the largest of the 34 extant species of pinnipeds in the world, and one of the most sexually dimorphic marine mammals - adult males are several times more massive than females. 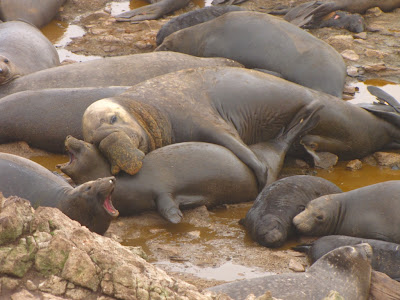 Alpha bull elephant seal mates with a cow.
Elephant seals are extremely polygynous compared to any other large vertebrate.  One male might mate with up to 200 females, while most males will never mate.

Females fast the entire time while nursing their pups, and the largest breeding males fast for more than one hundred days during the breeding season.  After losing up to 40 percent of their body mass while fasting, females then migrate at least 5,500 km and males at least 11,000 km into the ocean to find food. 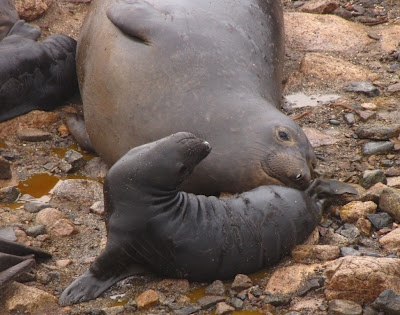 A cow aggressively defends her pup while nursing, but her weaned pup must learn to swim and hunt on its own.
Elephant seals dive deeper and longer than any other pinniped, and they spend more time submerged during their long aquatic wanderings than most whales! 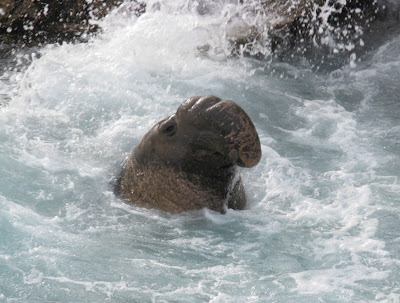 Elephant seals even sleep underwater.
No other large vertebrate has come so close to extinction and made such a rapid recovery as the northern elephant seal.  And thank goodness it recovered:  the South Farallon Islands and indeed the world would be a much poorer place without this most superlative of creatures. 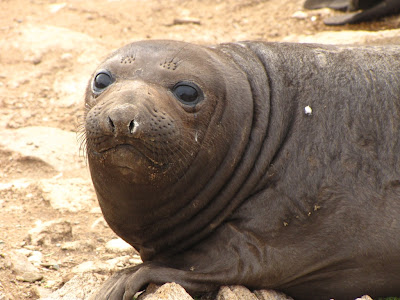 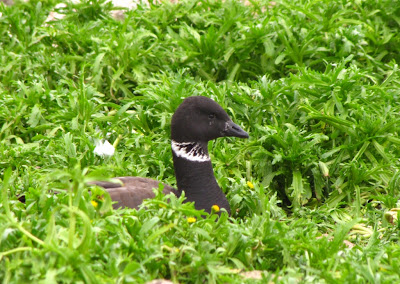 Molly, the brant who hangs out with the western gulls on SEFI from time to time, is back after a several-month absence. Welcome back, Molly!
3 comments: