During the winter, pregnant female northern elephant seals travel upwards of a thousand miles from their deep-ocean foraging waters to breeding beaches at SEFI and other colonies along the coast of California and Mexico. Here, the cows will give birth and nurse their pups, fasting the entire time they are on land. 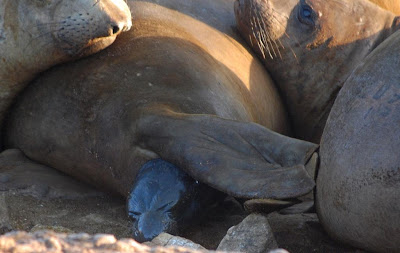 January is by far the busiest month, with up to ten new cows arriving and 6 pups born each day. A cacophany of noise resounds throughout the beaches, with males bellowing to each other to assert their dominance, cows calling anxiously to their pups and snarling at each other to defend their personal space, and pups crying for more milk. The peak number of cows this year on SEFI was 117, recorded on January 31.

After the cows have nursed their pups for 3 to 4 weeks, their energy resources and stored fat are depleted, transferred to their pups who will usually triple their birth weight. Elephant seal milk is extremely rich, with some of the highest fat content of any mammal's milk.

When a cow has transferred her fat reserves to her pup, she is ready to leave. Before she departs, each cow mates with one or more of the big adult males, who have been awaiting this moment for weeks. To us, the males seem to form an obstacle course through which a cow must navigate on her way back out to sea. Some sneaky guys will even lurk in the water waiting for a final chance to mate with cows before they reach the deep water. We've seen cows copulating with 3 different males, but they have little choice, since the males are 2 to 3 times larger than the cows. Below, the bull Gimli mates with a cow while her pup looks on. You can see the battle wounds from a recent fight, when Bedlam Boy took a large bite out of Gimli's nose (see previous blog posting).

When the cow departs, she leaves behind her weaned pup, called a "weaner." On SEFI, the number of weaners surpassed the number of pups on February 16. Now, PRBO biologists are on weaner patrol, heading to the beaches each morning to see which cows have departed and to record the sex and size of their weaners. We also give each weaner a small plastic flipper tag so we can permanently identify the individual. Some day, if the animal survives, it may return to SEFI to breed as an adult, and the flipper tag will allow us to know its age, birthplace, and mother. 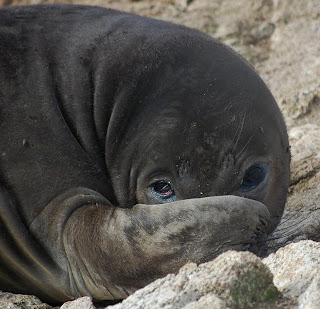 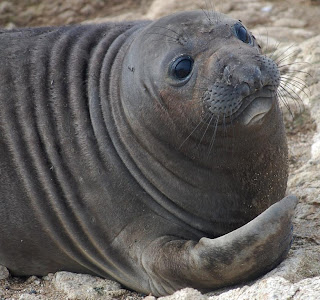 Another big battle today, as Bedlam Boy defeated Gimli by driving him off the Marine Terrace harem. These fights are how the elephant seals determine whose genes are the best, and who earns the right to copulate with the harem of females. Harem-based mating is called polygyny and often results in the most bizarre male appearance and behaviors in the animal world through a process called sexual selection. 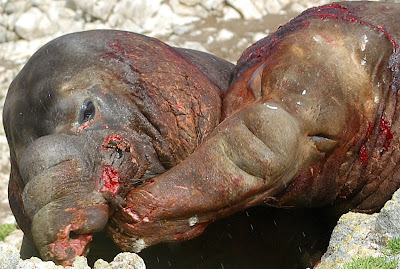 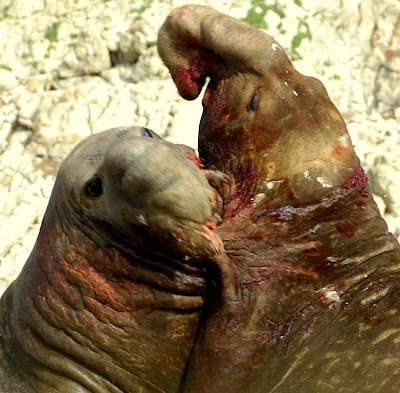 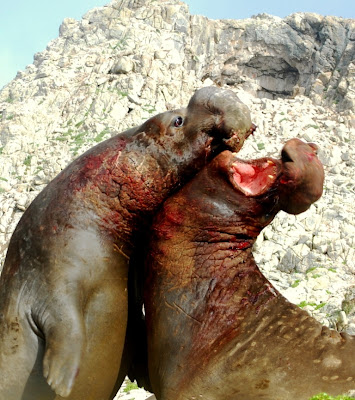 Click here to see a video of this contest. 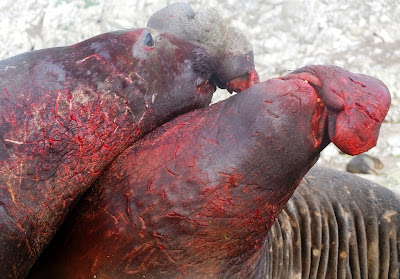