The Farallon Islands are known for attracting rare and unusual vagrants. These have included songbirds more common to the east coast that have migrated up the wrong coast and birds from Asia that ended up on the wrong side of the Pacific. But this week we had an exceptionally rare visitor to the island.
This Northern Gannet was first spotted in Fisherman's Bay on April 25th while we were doing our daily Pigeon Guillemot census. This represents not only the first island record and first California record for this species, it is actually the first known record for the entire Pacific Ocean. An exceedingly rare sighting.


Having seen gannets on several occasions on the East Coast, I instantly recognized it, but then realized that I shouldn't be seeing a gannet here and tried to turn it into something more likely. Maybe a Masked or Red-footed Booby. Both are superficially similar and have been spotted here before, though also extremely rare for California. But a quick glance at the field guide confirmed the original identification. It must be a Gannet, there is nothing else it could be.


But what is it doing at the Farallones? As you can see from the range map below, it has no business being here. How did it get to the Farallones?
The likely answer is that it came across through the now open water of the Northwest Passage. Climate warming has resulted in a reduction in pack ice and and an increase in open water all the way across the top of the continent.  This bird probably followed that water and ended up in the wrong ocean. In fact, just last summer, there were two individual Northern Gannets reported in the Arctic Ocean north of Alaska.  That was a first for that region and a clear sign that a warming planet is opening up new avenues for seabird dispersal. Maybe this is another case like the one in the Arctic or maybe it is even the same bird, having migrated down the West Coast for the winter and finally stopping for a rest in a sheltered cove near our little island. We can't know for sure, but we do know that a warming planet and more open water will allow for more mixing of marine species between the Atlantic and the Pacific. Maybe someday we will be seeing Atlantic Puffins and Razorbills at the Farallones and Tufted Puffins and Cassin's Auklets will be breeding in Newfoundland.
5 comments:

Musings from the Murre Blind

We sit at observation post in the Murre Blind, with an open window view of Point Reyes, 17 miles beyond Fisherman’s Bay. We listen to some tunes while searching for a few uniquely color banded individual birds among the tens of thousands of murres chattering away on the slope below. The wind has entirely died overnight; the sea is like a lightly rippled blue tarp. Gentle swells from the northwest lap the weathered, guano covered granite of Sugar Loaf Islet.
Fringing the murre colony, Pigeon Guillemots display their vibrant red mouths as they whistle a soft high pitched call; while regal Western Gulls stand in pairs on the cliffs around the blind window, ready to defend their patch of Farallon Weed from any foreign invader or challenger. Prospecting Tufted Puffins, the clowns among the breeding seabirds here, circle at eye level just meters from our window; their rock star head gear fluttering in the wind. 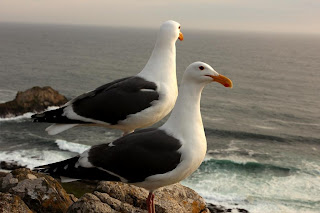 Two resident Gray Whales break the calm of Fisherman’s Bay with their powerful exhalations, surfacing for a few quick breaths as they feed on Mysiids and other small marine invertebrates. In the distance, spouts of a different kind jettison from the blowholes of the largest creature ever known to draw a breath – the Blue Whale. Weighing over 100 tons, these goliaths have returned early this year, feasting on an abundance of krill. At least 40 Humpback Whales have also joined the party, scattered across the horizon in all directions and occasionally showing off their acrobatic skills.
We hit pause on our MP3 device to hear the low growl of Steller (or is it Steller’s?) Sea Lions basking in the morning sun at Arch Rock, accompanied by the strange squealing vocalizations of Northern Elephant Seal weaners and the familiar dog-like bark of California Sea Lions. This chaotic symphony of pinnipeds emanates directly upwind of our perch, our noses full of the pungent odor of molting marine mammals in the light breeze.
It's just another typical morning in the Murre Blind. Over the coming months we will watch these birds as they carry out the business of breeding. We will spend many hours up here in the blind, keeping detailed records on which birds return to the island this season, how many chicks they are able to raise and what they are eating. So stay tuned for future musings and updates from Los Farallones.
Written by Mike Johns
Farallon Summer Research Assistant and denizen of the Murre Blind