Fall on the Farallon Islands may bring up exciting ideas about songbirds, seabirds, cetaceans, or pinnipeds, but Southeast Farallon Island’s most abundant species each fall is the non-native house mouse (Mus musculus). In 2010, population estimates recorded house mouse density to be ten times greater than densities reported on the mainland or on other islands. House mouse populations on SEFI are cyclic, peaking in the fall and plummeting in late winter and early spring. This cyclic pattern is the foundation of an interesting food web quandary involving two SEFI natives that are also California Species of Special Concern: Burrowing Owls (Athene cunicularia) and Ashy Storm-Petrels (Oceanodroma homochroa).

Burrowing Owls are small, long-legged raptors that migrate to SEFI each fall. From as early as the late 19th century up until the present day, Burrowing Owls have been observed on SEFI. They are generalists that feed primarily at night on rodents, invertebrates, and birds.

Burrowing Owl in front of its rocky crevice roost. Photo by Jim Tietz 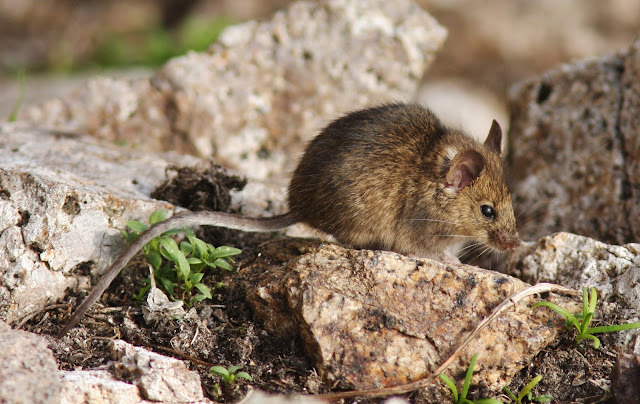 The house mouse is the most abundant species on the island in fall. Photo by Jim Tietz.

If mice are eradicated from SEFI, it is likely that the overwintering Burrowing Owl population would decline. Owls that currently arrive in the fall find plenty of mice to eat and therefore have reason to overwinter. However, if the owls arrived in fall to a mouse-less island, the biomass provided by the invertebrate prey would be insufficient to sustain them through the fall and early winter. The owls would be forced to migrate elsewhere in search of a more abundant prey base. Burrowing Owls that do not overwinter are not preying on Ashy Storm-Petrels. Currently, the USFWS is developing a proposal to eradicate the house mouse from the Farallon Islands, which, if successfully implemented, would likely be an effective long term benefit for the declining Ashy Storm-Petrel population.

So far during the fall of 2015, we have documented 23 Burrowing Owl arrivals and have banded 19 of them. One owl observed had been banded in  2013. In the past two months, 53 Burrowing Owl Pellets have been collected. Currently, there are at least 4 Burrowing Owls still on the island that may attempt to overwinter. Since 2007, the number of arrivals each year has averaged around 17 Burrowing Owls. An exception to this average was in 2012 when there were 54 individuals. We will continue to survey for Burrowing Owls for the years to come in order to collect data on their life histories and the impacts they have on Southeast Farallon Island’s ecosystem.