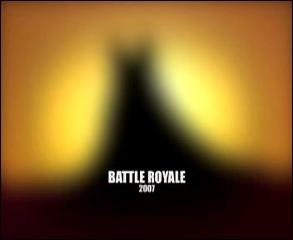 We had an awesome fight for Mirounga Beach between a couple of evenly-matched bulls. Sean Bogle, our cinematic intern made a terrific video of the conflict.
Here are also some great still photos of the same battle by Sarah Chinn. 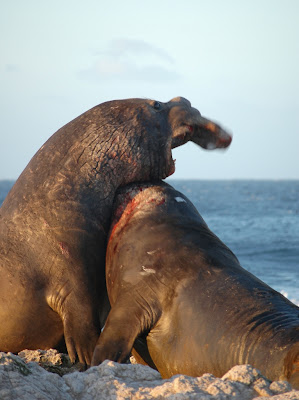 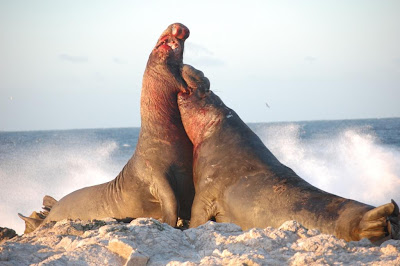 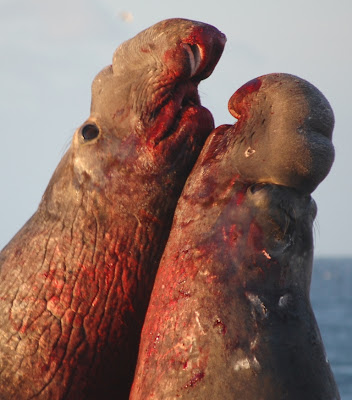 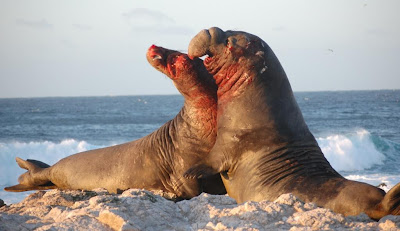 Here is a link to the raw footage of the video, for those who don't want to miss a single shove or bite.

You may remember the cow Schnitzel and her two difficult years of failed reproduction. Schnitzel's pup died in 2004 and in 2005 she abandoned her pup. However, last year her pup survived to weaning. Weaning is when a mother goes back to sea, leaving a milk-fattened offspring on the beach to fend for itself. From that day forward, these pups (now weaners), who have never known anything but the island and their mother's care, must instinctively learn to swim in the ocean, avoid predators, and feed themselves.

We tag all of our pups every year, but so few return to the Farallones in subsequent years – either because they failed to survive the sharks or because they emigrated to another colony – that we only name animals older than 1 year, and typically just breeding adults.

This month, a tagged immature was spotted on , and when we looked up his tags we discovered that he was Schnitzel's weaner from 2006. Weanerschnitzel survived his first season in the ocean where he apparently found plenty to eat. 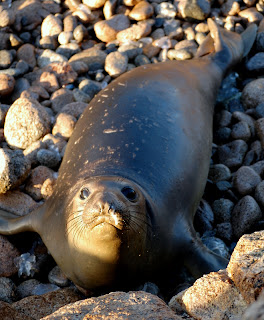 With today’s arrival of the first elephant seal pup of the 2008 breeding season, to First Cow, we are finally starting to see some action on the main breeding beaches of the . Although we only have three cows so far (including First Cow and Robin Robertson), this is typical of the beginning of December. In the past two years we documented unusually early cow arrivals, as well as the earliest pup ever born here, and we wondered whether the trend would continue, but the timing of seal arrivals appears to be back to “average.”

The big males are starting to sort out their hierarchy. Last year the three largest harems on were dominated by Don Francisco (Sultan of Sand Flat, by far the biggest harem), Bob Bond (Master of Mirounga Beach) and Brendan (Titan of the Terrace). None of the bull males have yet arrived, but we’re watching and waiting with bated breath. To date, we have seven large males who are potential contenders for access to females, although none of them are true bulls. 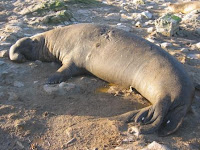 Aubrey, although relatively small in size, appears to be an aggressive fighter. Aubrey easily has everyone else – including Salvatore – running scared, and is currently the master of Sand Flat (and its two cows). 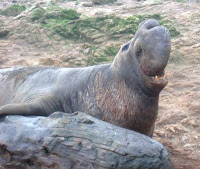 Salvatore hung out on the periphery of Sand Flat last year, constantly sneaking up on females under Don Francisco’s (very large) nose but then high-tailing it when Don bellowed his anger. Salvatore is back in the same spot this year, and has been in at least one big fight because we found him one morning on nursing some bloody wounds on his nose. When Aubrey leaves Sand Flat, Salvatore takes over, but then flees when Aubrey returns. He is bigger than Aubrey and beat him last year, so we’re still waiting to see how things shape up between them. 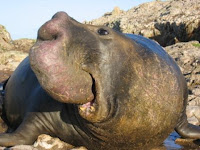 Bedlam Boy is another larger-sized male with a big nose who has been coming to the Farallones for several years. He has many fighting scars which make him easy to spot from afar. So far he has fled from both Aubrey and Salvatore, but he is certainly in the running for at least one of the smaller harems.

Rusty is an old favorite of ours, and was the first big male to show up this year. He has been hanging out on the Marine Terrace, perhaps saving up his energy to take over one of the harems once the cows show up in full force. 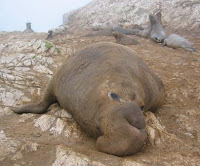 Don Quixote is a new male tagged and named this year. He first arrived on Sand Flat, but promptly was kicked off by Salvatore. Don Quixote had some bloody wounds on his back, so he’s been taking it easy at Sea Lion Cove for the past few days.

DMX is smaller but a very insistent male who aggressively pursues the females. He still flees from the bigger males but always has his eyes on the cows. Today he just took , with its one cow.

Let us know who you think is going to be the King of the Farallones this year!

December 1 marked the seasonal changing of the guard for PRBO Conservation Science biologists at the Farallon Islands National Wildlife Refuge. We set right to work monitoring survival, reproduction, and population growth of one of the most intensively studied northern elephant seal breeding colonies in the world.

On our first check of Sand Flat, 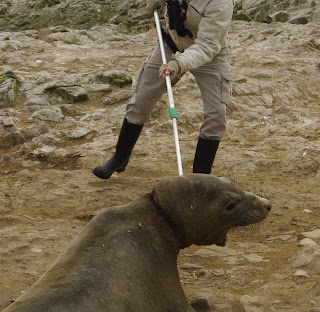 we discovered an immature female elephant seal with a plastic strap (the kind used to bind stacks of newspapers) stuck tightly around her neck. The ring was cutting into her flesh, making a very nasty wound, choking her slowly and painfully, and ultimately would have resulted in her death. PRBO biologist Derek Lee fashioned a hook with a sharpened inner edge on a long pole, and was able to cut off the plastic strap. After four days she is still on the beach and her wound is healing nicely. 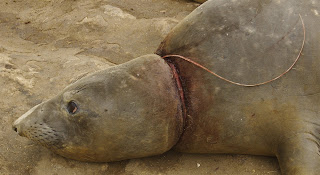 Although people think that plastic trash is going to the landfill, very often it washes out to sea and kills wildlife. About 80% of the plastic in the ocean has been transported from non-point source pollution from storm drains, creeks, rivers, streams and beaches into the ocean, where it becomes a threat to marine life. Clear plastic bags that look like jellyfish are eaten by endangered leatherback sea turtles. Albatrosses in the North Pacific (and other seabirds) feed small plastic items to their chicks, and they eventually die. Animals are entangled in plastic straps, rings, and nets, and either drown or slowly choke to death – we typically see at least a dozen ringnecked sea lions on the Farallones every year.

An enormous area twice the size of Texas that is covered with plastic debris swirls around the central Pacific Ocean, known as the Eastern Garbage Patch. There is also a smaller area off the coast of Japan known as the Western Garbage Patch. Areas in the oceans that concentrate plastic items and fragments can threaten thousands of seabirds, sea turtles, pinnipeds, and other marine animals. In fact, according to ecologist David Laist of the Marine Mammal Commission, plastics may kill as many marine mammals as oil spills, heavy metals, or other toxic materials.

Our incident on the Farallones serves as a reminder that vast amounts of plastic, which can persist up to 1,000 years, finds its way into our ocean and ends up having severe unintended consequences. This female elephant seal was lucky, but how many other marine animals are not? One way you can help is to reduce your own consumption of plastics, and to lobby your elected officials for local measures to control storm drain runoff.
6 comments: