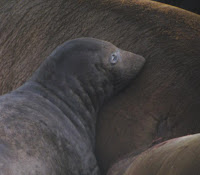 The northern elephant seal breeding season is in full swing, with 12 cows and 5 pups on Sand Flat (including Drip, Kyra, Aphrodite, and Gypsy with pups, and Siu and Arwen still pregnant), 3 cows and 1 pup in , and 1 newly arrived cow on the Marine Terrace of Sand Flat. The photo on the left shows Drip's pup, already 17 days old, nursing from one of two nipples located on either side of her mother's belly button. Through our tagging efforts, we know the entire history of Drip and her mother. By tagging these seals as pups we know when and where they were born, and can track them throughout their lives. PRBO scientists are reaping the rewards of 30 years of tagging effort because we are able to determine lifetime reproductive success of multiple generations of females, and correlate these long-term demographic data to individual and environmental variables such as age, oceanic conditions, and climate change. 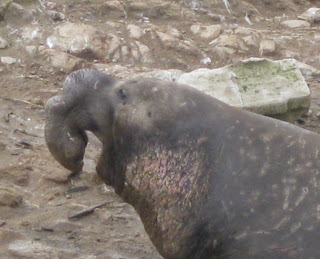 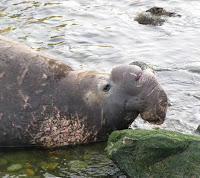 After kicking off smaller Mauricio, Rusty (above) has settled in as alpha bull on the Sand Flat, historically the largest harem on SEFI. A large chunk is missing from his nose, and Don Quixote (left) has been spotted in the gulches with some gaping wounds on his own nose and back. We suspect there may have been a fight between these two massive, 5,000-pound males. Today we counted 8 subadult males lurking on the outskirts of the Sand Flat harem, so Rusty will have his work cut out to keep them away from "his" cows. 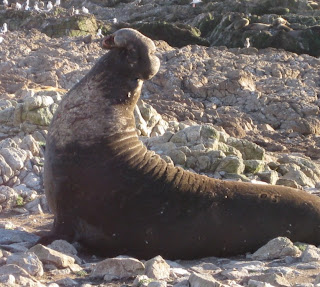 Gimli has been guarding an empty Marine Terrace Sand Flat for the past 10 days. Today he was rewarded for his patience. A pregnant cow just arrived, the first 2009 breeding female for this relatively new harem. Gimli is sporting some impressive scars on his nose and cheek from last year’s big fight with Bedlam Boy. Note in the picture on the right that part of his nose is missing!

Due to the and Steller sea lions that have moved into we have only been able to look into this area from afar. We know there is a big bull – we can hear and see him – but we haven’t been able to read his tags through our scope yet. In mid-December Salvatore, last breeding season's Sand Flat alpha bull, was hanging out on Last Resort but oddly he departed just after Christmas and we haven’t seen him since. Maybe he went to West End, or maybe he is in . 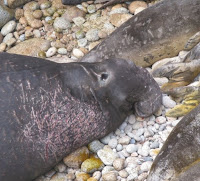 Finally, Bubba is moving between Garbage Gulch and North Landing, where cows have been arriving but then leaving after just a couple of days. Garbage Gulch typically supports a handful of breeding cows, but thus far no cows have remained there. Bubba, too, has some fresh wounds. Time will tell where this big bull will end up.

The gulches and breeding beaches are still full of immature elephant seals, but they are leaving by the day. Based on the color of their flipper tags, we have seen young seals born on San Nicolas Island, San Miguel Island, Point Reyes, and – best of all – we spotted an immature from Año Nuevo with a satellite tracking device glued to its head. This device allows researchers to track where this young seal is foraging at sea. 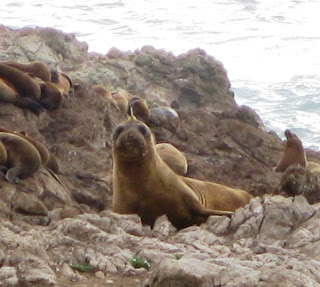 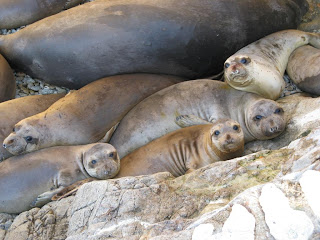