Burrowing Owls on the Farallones??! 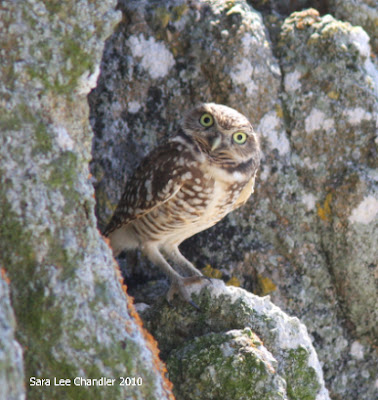 Yes, it’s true! There are burrowing owls on Southeast Farallon Island (aka, SEFI), and no, they are not an introduced species. Many people will be surprised to learn that these petite (10 inches tall and 1/3 pound) owls are here, because they are terrestrial owls, typically associated with expanses of flat grassland, open fields or lots, and medium-sized fossorial (burrowing) mammals such as ground squirrels or prairie dogs. SEFI is mostly rocky, devoid of burrowing mammals other than the introduced Siberian house mouse, is surrounded by ocean and nearly 30 miles from any expanse of land - hardly typical habitat for the burrowing owl. And yet they are here! The U.S. Fish and Wildlife Service and PRBO Conservation Science biologists have been monitoring the burrowing owls on the island for the last few years, and this year, they have brought on a graduate student to continue the owl monitoring and conduct a more in-depth look into the ecology of the owl. This student is Sara Lee Chandler, who is currently pursuing her Master of Science degree at San Jose State University. 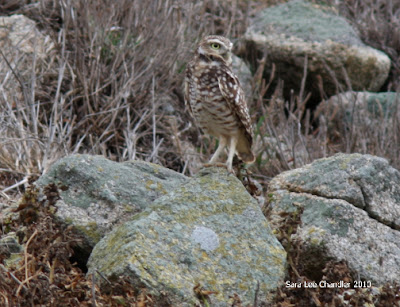 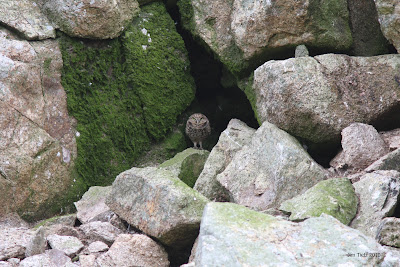 A small number of burrowing owls make a seasonal appearance, arriving on SEFI from somewhere on the mainland in late September and sometimes overwintering as late as May. The burrowing owl does not breed on the island, but returns to the mainland to breed. One of the goals of monitoring the owls is to keep track of how long they stay on the island and where they are roosting. Sara conducts daily roost surveys of the accessible portions of the island (the seal crew conducts some of these surveys when she’s on break), scanning the nooks and crannies of the granite cliffs and slopes for an owl perched at its roost entrance, and keeping a keen eye on the ground to find pellets that have been deposited in the night. Many of the owls have been previously banded at SEFI and wear leg bands that uniquely identify them, which helps to keep track of which owl is at a particular roost. 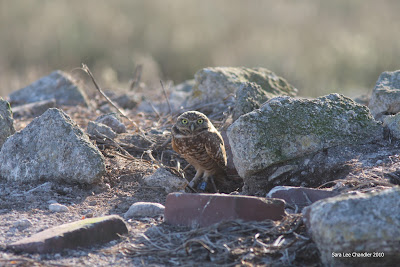 The majority of the owls seem to prefer to roost in the innumerable rock crevices and fissures worn into the face of the island. Many of these crevices are used by breeding seabirds - such as Pigeon guillemot and Cassin’s auklet - in the summer. Sometimes burrows dug by Cassin’s auklets provide suitable habitat for the burrowing owl on the marine terrace. Sara collects the owl pellets at the roosts, which are regurgitated leftovers from an owl’s meal, and will analyze their contents to compare the composition of the owls’ winter and spring season diets. In general, however, it is known that owls are an opportunistic eater, feasting on the introduced house mice, but also preying upon songbirds, small seabirds (such as the ashy storm-petrel), beetles, and other terrestrial invertebrates on the island. 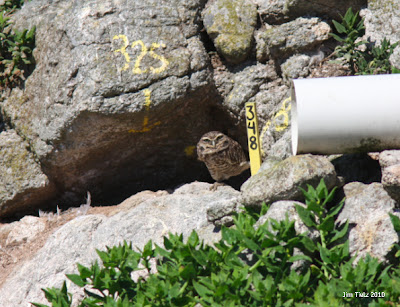 The burrowing owls, while relatively few in number, are a unique part of the ecology on SEFI. It is our hope that ecological studies of the burrowing owl on SEFI will contribute toward the knowledgebase of this charismatic animal. 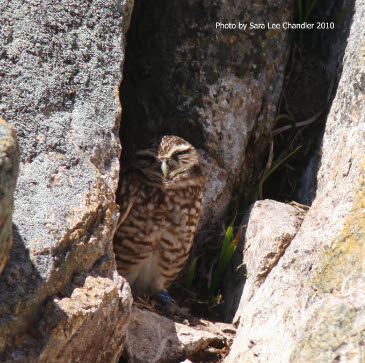 Welcome to the winter season

It has been just over a week since the seasonal switchover and the winter team is settling in. We were brought to the island by a couple of wonderful Farallon patrol volunteers - Warren Sanky and Alan Weaver - who made our voyage safe and comfortable in a 40 foot power boat. During the past week the new crew has been training, becoming acquainted with the elephant seals, and getting used to an overabundant diet due to an overflowing pantry. The transition has been mediated by Russ Bradley, who is here for two weeks to show us the ropes and to entertain us in the meanwhile with many stories and the history of PRBO research on Southeast Farallon Island. He will unfortunately be leaving us on the next boat, which will be bringing the third intern to join the team, Jamie Neill.

A few introductions to the team currently on SEFI are in order:

- Ryan Berger, Winter Biologist
This is Ryan's first season as the Farallon Winter Biologist. He has a background in animal behavior with a focus on marine mammals. Before joining PRBO, he worked with manatees for the Florida Fish and Wildlife Conservation Commission. He enjoys a healthy challenge, and attempts to tag and identify Rusty have not proven disappointing.

-Colleen Siudzinski, Winter Intern
Colleen has been working with wildlife in the Northwestern Hawaiian Islands for the past three years. She has extensive experience working with the endangered Hawaiian monk seal. She is quite comfortable with being marooned on a small remote island, but is looking forward to an adventure in a new environment.

-Jane Khudyakov, Winter Intern
Jane studied developmental biology as a graduate student and is currently a postdoc working with microbial communities. She has been working with pinnipeds at The Marine Mammal Center during the past year. She has finally broken out of the lab for a unique field experience and is enjoying this introduction to macro-ecology.

-Sara Chandler, Owl Biologist
Sara is a graduate student at San Jose State University who is studying the winter ecology of burrowing owls. She has long been a fan of the burrowing owl, and other raptors and songbirds too. Sara has a background in wildlife biology, environmental consulting, and vegetation monitoring. She feels very lucky to be on the island
studying one of her favorite birds.


The elephant seal season is underway, and the bulls are starting to show up and stake out some territory. We have identified several bulls that were here last year, including the cantankerous favorite and one of last year's alphas, Rusty, as well as others such as Bedlam Boy and MC Hammer. These bulls will soon be battling for the prime territories to gain access to their harem of females. We've been working on identifying the bulls by reading their flipper tags as well as looking out for the arrival of pregnant cows, which should start happening in the next few weeks. Once the cows settle in, they will be giving birth to pups and nursing them continuously for about 3 weeks without leaving their pup, even to feed. After the pup gains a tremendous amount of weight and is weaned, the alpha males will mate with all of the females in their territory.

So far, we've had only three potential pregnant cows, and no sign of elephant seal pups yet. In order to be able to easily identify the potential breeders of the season, we have been working on stamping numbers on the arriving cows and bulls using hair dye. This has been a new experience for everyone on the winter team. "Crusty" Rusty especially has been quite suspicious of our attempts to read his tags and give his coat
a brand new stamp. We've been having some problems getting the "Born Blonde" hair dye to show up well on the brunette seals that we have already stamped, so we are going to try out a different dye setup which will hopefully make the numbers stand out so that we can identify the main role-players quickly from a distance.

In between the elephant seal monitoring, our week has been consumed by extensive training for all aspects of our work on the island this season. We've practiced the routine for both the East and North boat landings, learned how to record weather conditions throughout the day, studied the names for different locations on the
island, and have been slowly becoming acquainted with the abundant bird life of the Farallones. We’re getting up to speed in terms of entering the abundant demographic data into the PRBO databases. We've also cleaned out the house and organized all of our food, fuel, and other supplies – out with the old, in with the new, for a new season.

Once we are fully settled and trained, a regular day for the elephant seal crew would go like this: a Western gull count at dawn, followed by breakfast and elephant seal monitoring. Twice a week we count all of the elephant seals present at accessible locations on the island. Once a week all of the pinnipeds are counted from the lighthouse. Twice a month, the California arboreal salamander population on SEFI is thoroughly monitored. After lunch, we go up to the elephant seal blind which hovers on a rock above Sand Flat and read elephant seal tags and note the new cow and bull arrivals. The day wraps up with a dusk gull count, data entry, and a consistently delicious dinner. After dinner, we record our findings for the day in the Farallon journal, which will eventually be bound and retained for permanent record. The workday of the burrowing owl biologist is quite different from that of the elephant seal crew, and deserves a blog post all of its own.