There Be Whales Here!

With the arrival of August, we have seen the departure of many breeding seabirds. Most Cassin’s Auklets chicks have fledged, Common Murres are no longer present, and Western Gull fledglings are beginning to take flight. The fog has lifted most days, giving us excellent visibility for whale watching. While there has been a great reduction in forage fish populations like anchovy in the Gulf of the Farallones this year, krill is abundant. This food supply has likely led to recent increases in the numbers of Humpback and Blue Whales present near the island. 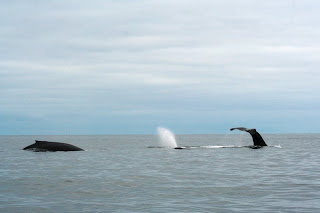 Humpback Whales near Middle Farallon
When feeding conditions are good, both of these species are drawn to the Gulf in the late summer and fall from their breeding areas further south along the coast of Mexico and Central America. Humpback whales are the acrobats, leaping out of the water and slapping the surface with their immense pectoral fins. You can often see massive splashes from the breaching miles away, even without binoculars. 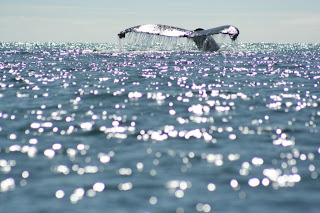 Blue whales are the largest animals to have ever lived, and while the North Pacific Blues are not as large as their Antarctic relatives, they are still an impressive sight up close. With a blow like a fire hydrant and a 70+ ft body, there is no mistaking a blue.

Blue Whale in Fisherman's Bay
While blues and humpbacks have arrived relatively recently, we have seen resident gray whales at the island almost every day this spring and summer. As we have observed for the past several decades, 2-3 Gray Whales feed at the island throughout the spring and summer months. This is unusual behavior, as most grays migrate from breeding areas in Mexico to feeding areas in the Bering Sea each year. It appears that a small number of whales decide not to make the full migration, and spend their summers part way along the route.

Gray Whale off East Landing
In addition to whales, there are many species of dolphins which are present as well. Recently we have seen Risso’s Dolphins (heavily scarred by squid and each other), Pacific White Sided Dolphins (high flyers), Northern Right Whale Dolphins (look ma, no dorsal fin…), and Dall’s Porpoise (kicking up a rooster tail with their rapid swimming). 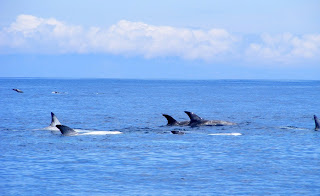 Throughout PRBO’s 40 year history on the Farallones, we have documented sightings of cetaceans (whales and dolphins) as part of our long term studies on this marine ecosystem. These data have shown the recovery of several species – including Gray, Humpback, and Blue whales. We will continue to chronicle these visitors to the island, and never lose that rush of excitement upon seeing these incredible creatures.
1 comment: