From Mundane to Mega

A lot has happened since our last post, though certainly things have begun to slow way down since our peak migration in early to mid October.  This has been one of the best falls in the past several years in terms of diversity and numbers of birds, and despite a subsiding landbird migration, great birds have continued to surprise us including large seabird flights.  From the mundane to the megas, we've had it all in the past few weeks.

After Jim Tietz left for his two-week break at the end of October, passerine migration nearly came to a halt, much to our disappointment.  Nonetheless, we were able to find a few very rare birds for the island, including a Cooper's Hawk found by Ryan DiGaudio at the lighthouse.  Sharp-shinned Hawk is far more common than Cooper's.  While this is only the 30th record ever for Cooper's Hawk for the island, we've seen 6 Sharp-shinned Hawks already this fall alone.  A Common Goldeneye was also found by Lukas Musher on Maintop Bay at the Northern part of the island.  The goldeneye is only the 6th fall season record and 20th ever.
Some of the relatively more common, though still interesting, birds we saw during late October include Great Blue Heron, Short-eared Owl, Barn Swallow, American Robin (first of fall), Varied Thrush, Townsend's, Magnolia, and Chestnut-sided Warblers, Lapland Longspur, Grasshopper Sparrow among others, and a very late Blackburnian Warbler on November 2 was a great surprise as well.
Jim Tietz still has all the luck, though.  After very few good birds during his absence, he was able to get two island birds upon his return to the island.  The first was the continuing Common Goldeneye found earlier in the week, and the second was a Horned Puffin, a lifer for the entire fall crew.  We immediately noticed the pale face and white underparts, and Jim pointed out that the pinched in base of the bill.  All of these features allow immediate identification, and differentiation from the more common Tufted Puffin. 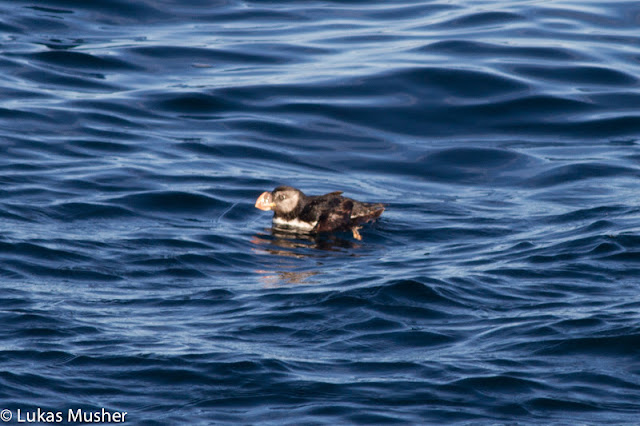 In fact we've had a lot of good seabird activity over the past few weeks.  In late October we had a couple days where literally hundreds of Buller's Shearwaters moving by in under an hour of sea-watching.  Lot's of Sooty Shearwaters, more Pink-footed Shearwaters, the first Northern Fulmars and Black-legged Kittiwake (immature bird) of the season, and both Pomarine and Parasitic Jaegers were also present during these late October seabird flights.  More recently, on November 7, we had a huge flight of waterbirds including 2400 Pacific Loons (counted between about 2PM and sunset), 13 Common Loons, 2 Western Grebe, 2 Short-tailed Shearwater, 30+ Northern Fulmar, 9 Pink-footed Shearwater, 100+ Sooty Shearwater, 3 Black-vented Shearwater, 185 Cackling Geese, 410 Brant, 1 Green-winged Teal, 2 Red-breasted Merganser, 2 Pomarine Jaeger, 24 Boneparte's Gulls, and 6 Ancient Murrelets.  We also had the island high count of 7 Horned Grebes that day.

Landbird migration picked up a little when Jim got back as well, including a couple major rarities.  This adult male Slate-colored Junco was one of two of that species on the island on November 5th. 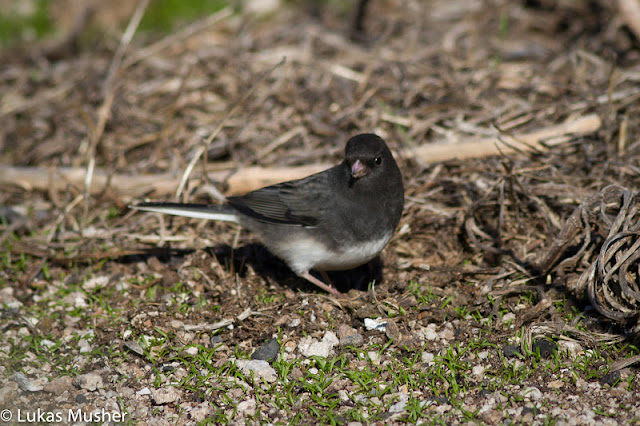 This first-year Rough-legged Hawk, our second of the year, showed up on November 6th, and has been with us ever since.  The features that help determine the age of this bird are the translucent patches on the primaries and relatively pale brown (versus the bold, dark brown-black of an adult) tail band and trailing edge of the wing.
Thayer's Gulls of all ages have begun showing up recently as well.  This Second-cycle bird, below, was found by Jim last week.  Note the small, thin bill, gently curved culmen, and round/dovey head that are all typical structural field marks of Thayer's Gull.  This bird is molting in gray feathers on the back, but has retained wing coverts making it a second-cycle bird.
Another good find was an eastern Orange-crowned Warbler (subspecies: celata).  We more commonly get the Pacific subspecies (lutescens), which has a greenish head; whereas the Rocky Mountain (orestera) and eastern subspecies both have gray heads.  We determined that this bird was an eastern by its short bill, measured in the hand.
Nora Livingston also found a Song Sparrow (actually a relatively rare bird on the island).  Oddly enough, the Song Sparrow was missing its entire left eye!  It's astounding that it made it this far with only one eye.  This particular bird probably represents one of the Song Sparrow races from the Aleutian Islands, as it was large, stocky, and long-billed with heavy brown streaking.

We were also pleased to see a male American Kestrel. 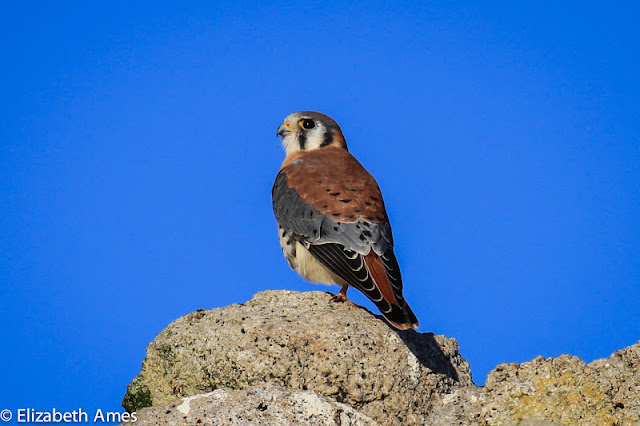 Our resident Common Raven left for a few days and returned with a friend.  Now we have two, a mated pair.

Owl numbers have increased as well, as is to be expected in late fall, with our season high counts of 2 Northern Saw-whet, 2 Barn, and 2 Long-eared Owls on November 16th.  We even got to band a Northern Saw-whet and a Barn Owl on November 11 in addition to our usual Burrowing Owls.
Our most spectacular day recently was November 14th.  We saw two California Bird Records Committee species (CBRC; these are species that must be documented and reviewed before the record can be accepted).  The first was a Rusty Blackbird, a very rare bird in western North America.  Note the rusty edges to the tertials, buffy supercillium, relatively thin bill and short, thin legs, and overall rustiness.  There are only 14 records for the island, so some people might say it's a pretty good bird.
Another great bird we had that day was a hatch-year male Summer Tanager. 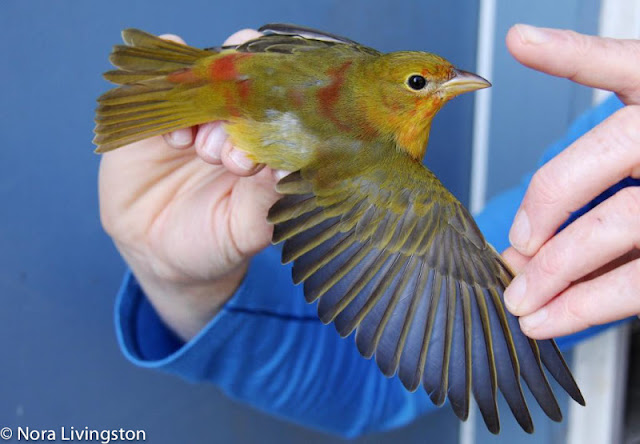 However, the best bird of the day was an absolute mega rarity.  Jim found the bird foraging near one of the houses, and quickly realized that it was a (¡¡¡)LITTLE BUNTING(!!!), a species from Asia that has only been recorded in California twice before (one of which is from this island).  Unfortunately he did not have a camera as he was wheelbarrowing salamander coverboards around, so he immediately radioed to the rest of the crew to get there ASAP with a camera.  By the time we got there, the bird had just flown.  We spent the next 30 minutes searching for the bird, but couldn't relocate it.  Luke finally relocated it in the company of a Pine Siskin, but we still couldn't obtain a photograph.  The bird then flew off, and was never to be seen again.  You can see our ebird checklist for the day, including Jim's description of the bird here.
We like bugs here too!  Check out some of our most common migratory insects.
By Luke Musher
No comments: