The Importance of Sea Surface Temperature 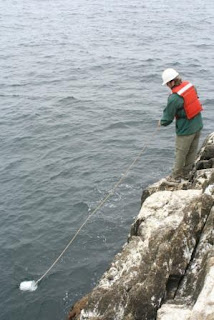 As you may know, one of our primary goals out here on Southeast Farallon Island is to monitor the reproductive success of seabirds and to use this information to indicate changes in the quality of the marine ecosystem. Often overlooked, however, is the fact that we also collect data on another very important indicator of change in the marine environment—Sea Surface Temperature.

Water temperature is one of the most important physical properties of the marine ecosystem. Not only does it strongly influence the metabolism and growth rate of marine organisms, but it affects their distribution throughout the marine environment as well. 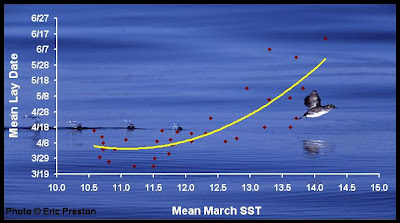 This relationship suggests that local sea surface temperature affects when Cassin's Auklets breed on the Farallones. The temperature of the surface water often indicates whether cold water, rich in krill (Cassin’s Auklets primary prey) from the North has made its way down to the Farallones via the California Current System (CCS). Local winds also mix the water, bringing cooler nutrient rich water up to the surface in a process called upwelling. The breeding season is the most energetically costly time of the year for these birds, because not only do they have to eat but their chicks do too. Sea surface temperature is a good general indicator of food availability for seabirds at the onset of their breeding season.
1 comment: