Ever since I first started coming out in 2000, I have heard about how the best birds are always found on Boat Days. Why should it matter that good birds are found on Boat Days you may wonder? The reason is that it takes time to properly document a rare bird, and we all want to enjoy the arrival of something new and unusual without having to focus all of our attention on pulling off a smooth boat landing. But the Boat Days provide us food and other necessities, and therefore, take priority over the birds. There is a precedent for this Boat Day superstition. Birds like the Red-faced Warbler, Alder Flycatcher, Red-flanked Bluetail, and last year’s Yellow-breasted Bunting were all found on Boat Days. But there were also many great birds that were not found on boat days such as the Lanceolated Warbler and Olive-backed Pipit. As is the case for most superstitions, positive circumstantial evidence is strongly remembered, while negative evidence is forgotten or ignored.

And then there is the Sacrifice – this occurs when somebody who has been on the island for a long time leaves, and then a really good bird shows up. This has happened to me several times when I leave for my break in mid-October. But I have also seen many good birds while still on the island. So again, this is another example of a Farallon superstition that we all love to distort into reality.

When I returned to the island from my two-week break on 23-Oct, my friends Matt Brady and Oscar Johnson were headed home after lengthy stays on the island. The superstitious ones of us were all expecting that a mega-rarity would be found soon afterwards. With a major storm raging outside, though, most birds were leaving, and we found very few arrivals. The strong northwest winds that followed the storm continued to keep migrants away until the wind slackened on the 27th and 28th, just before the arrival of the next big storm. With light east winds, we found several new West Coast songbird migrants such as Fox Sparrow and Northern Mockingbird. A flock of five Great and two Snowy Egrets flew by the island; without a marsh, the Farallones do not provide ideal foraging habitat for herons and egrets, so these birds made a big lap around the island and headed back to the mainland. Palm Warblers are continuing to come out to the Farallones in good numbers; so far we have recorded 37 arrivals, 30 of which were banded. We found a gray-headed Orange-crowned Warbler that is either from the intermountain race called orestera or the northern taiga form called celata. The strong yellow color on the chest, light yellow on the throat, and strong eye arcs are marks that are more in favor of orestera, but the bill length was 1 mm too short for orestera and fit better for celata. 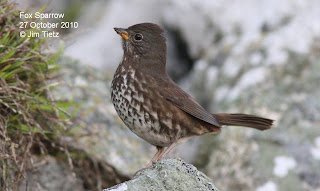 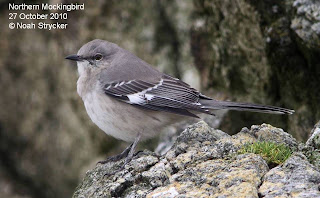 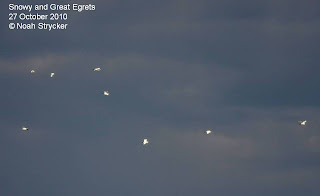 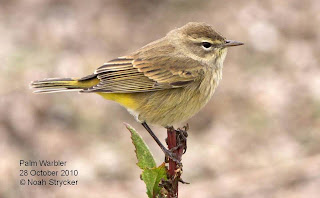 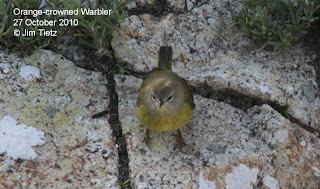 Late on the 28th, Elizabeth Ames found a young male Summer Tanager hunkered down in a chute on the north side of Lighthouse Hill. Summer Tanagers have averaged one per year on the Farallones, but somehow I had managed to miss them over the last several years. This one was a molting juvenile male, with mostly yellow plumage and few, scattered red feathers. Two days later Elizabeth found a female Summer Tanager at Corm Blind Hill. It’s funny how a bird can elude you for years and then suddenly you see two in three days. 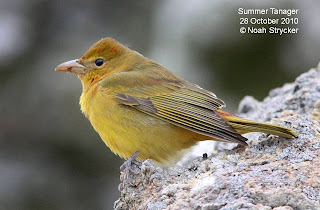 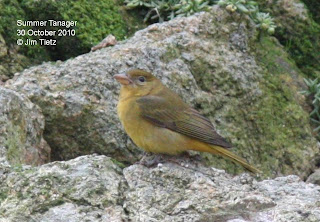 On 1-Nov, the Giants won the World Series, and we had our high count of the year for Brown Pelicans at 95. This has been one of the worst years ever for Brown Pelicans. Usually, pelican numbers peak at around 2000. One theory for their decline is that their prey species has declined in the area and the birds are foraging elsewhere. This seems likely for the adults, but the ratio of adults to young is about 60 to 1. So what happened to the last breeding season? The lopsided ratio seems to suggest that there was nearly complete reproductive failure. 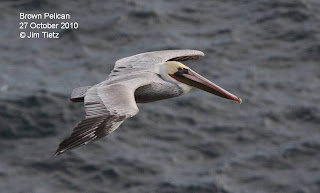 The following day, the fog rolled in shortly after dawn. Before the island vanished, though, a few birds were able to find it such as American Pipit, Lark Sparrow, and Eastern Phoebe. All these birds showed up at the lighthouse for brief appearances and then disappeared before anybody else could find them. Fortunately, another (or the same) Eastern Phoebe showed up two days later. 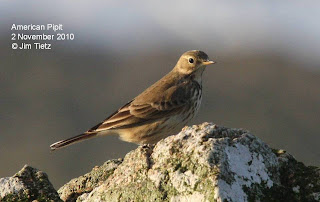 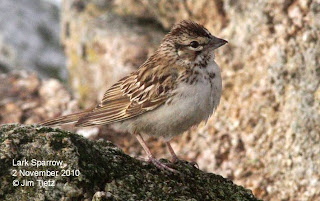 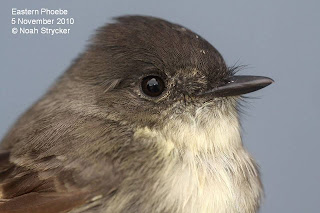 After a few days of dense fog, we experienced excellent weather for attracting migrants – light east wind, overcast skies, and visibility of just 7 miles. On 5-Nov, we found a Tennessee Warbler at the lighthouse whose diet consisted of at least one spider as shown in the photo below. Later in the day, Dan Maxwell found an Indigo Bunting in the Rixford Tree, a Monterey Cypress planted in honor of the first Farallon Patrol skipper. 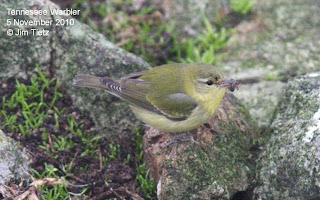 On 6-Nov, Dan Maxwell’s final day was upon us. Dan arrived on 11-Sep and was on the island for eight weeks. Noah Strycker predicted that Dan would see either zero or two new island birds on his last day. While the rest of us were cleaning the house and getting ready for the landing and Dan’s departure, Noah called down on his radio that he had found a Scarlet Tanager on Lighthouse Hill. This is a very rare bird on the Farallones and anywhere else in California. The rest of us all climbed the hill and got great looks at it. This was Dan’s first new island bird. Shortly after seeing the bird, the sailboat arrived and the landing began. While watching the boat pull up to the East Landing ball, a pair of adult Ancient Murrelets swam between us and the boat. Noah was right, this was Dan’s second new island bird, and just moments before he would get on the sailboat. Since the entire boat crew wanted to tour the island, I put Dan on the boat with Elizabeth, while Erika Taketa and I ran the landing. 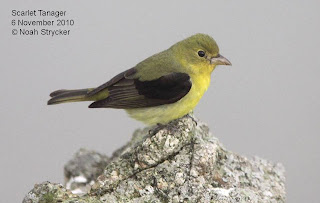 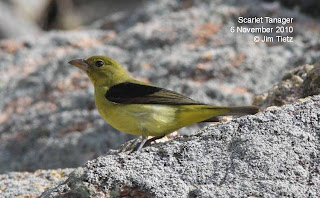 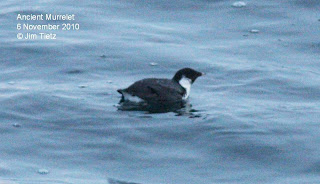 At one point, Erika pointed out a bird flying overhead. I got a quick glimpse of it and heard it give a distinctive rattle call. I told her that it was a longspur, probably Lapland, and that she should go look for it on the Marine Terrace, a flat area with dead, matted-down vegetation. She took a quick look, but could not relocate it. After the sailboat left, I saw Noah and suggested that he should look for the longspur because it could be a Smith’s Longspur. This is a very rare species in California, and I didn’t really believe that it was one, but instead I was trying to encourage Noah to look for it and consider the possibility. A half-hour later, Noah came back into the house and showed me some photos that he had taken of the longspur. We tried to convince each other that it was just a drab Lapland Longspur, “the bill seems too big for Smith’s” and “the spacing of the primaries isn’t right.” But the drab greater coverts and buff-colored belly were not right for Lapland Longspur either. Eventually I decided that I needed to see this bird to be on the safe side. I brought my camera along, and Noah and I got many really good photos of it that show it to be a Smith’s. This was the first time this species had been seen on the island, and just the 8th time it had been seen in California! Ironically, I had included Smith’s Longspur just two weeks previously on my top 10 list of new species for the Farallones. This bird has now been here for three days! So, do good birds show up on Boat Days? Was Dan the Sacrificial Lamb? Or, are these just silly superstitions? 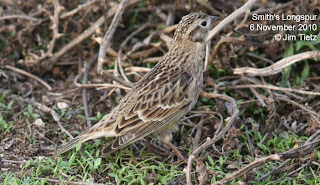 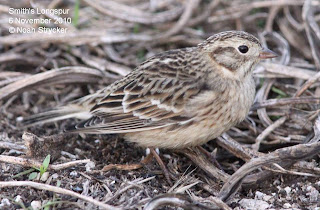 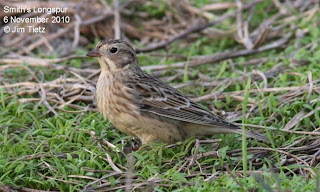