The weather this fall has not cooperated much to bring migrants to Southeast Farallon Island. Typically in the fall, nocturnal migrants land on the island when there is a light east to southeast wind that pushes the birds offshore. If there is cloud cover over the coast (usually a marine layer or fog), then the birds do not realize that they are over the ocean until they descend through the clouds in the morning to find food. If the ceiling is high enough so that the visibility is 5-15 miles (Pt. Reyes is the nearest shoreline at 20 miles), then the birds can see the island, but not the coast. If the ceiling is too high, then birds with sufficient energy will fly back to the coast. If the ceiling is too low, then the birds cannot find the island. The weather this fall has alternated between dense fog and gusting northwest wind. Neither allows many birds to find the island.
Although many migrant songbirds probably flew right past the island without even knowing we exist, a few hours of good weather on 9 Sept brought some nice surprises such as the Canada Warbler that we eventually caught in the Heligoland mistnet. Other interesting birds seen this day were a pair of Purple Martins flying over the lighthouse, a Baltimore Oriole seen in a cave during an area search, and a Clay-colored Sparrow in Twitville. 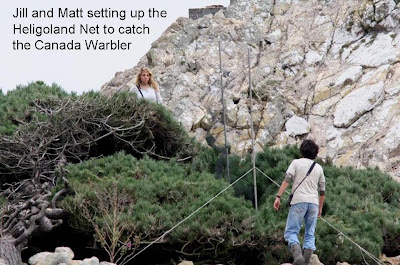 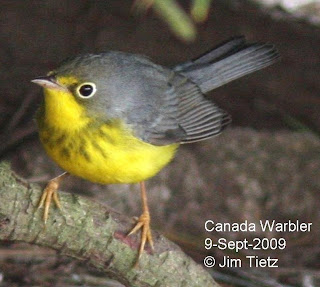 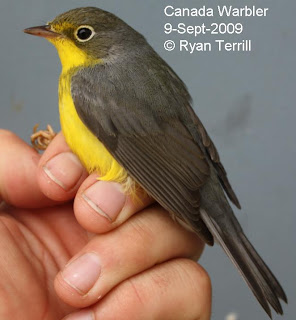 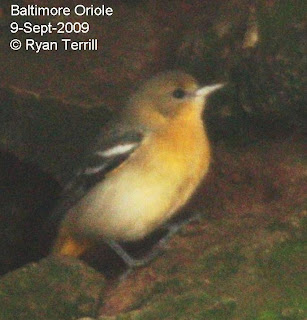 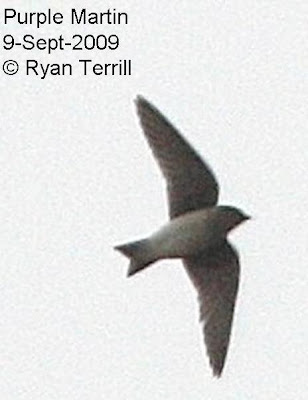 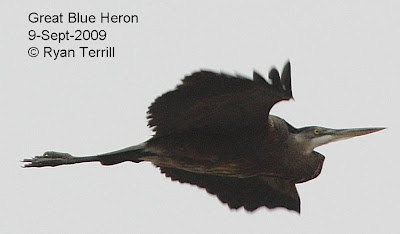 The fog briefly dissipated today and brought a few more birds like this juvenile Orchard Oriole. 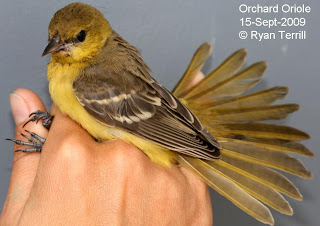 Thankfully, some birds that arrived earlier lingered in the bad weather while others that remained may decide to overwinter. While the Farallones has had many species of shorebirds migrate to the islands, only a few species of shorebirds overwinter. The ones that do overwinter usually are ones that can utilize the extensive rocky shoreline such as Whimbrel and Wandering Tattler. During high tide, PRBO biologists conduct a shorebird survey that attempts to locate high tide roosts where large numbers of these "rocky" shorebirds congregate. Other species such as Long-billed Dowitcher turn up at the few small ponds along the water's edge or on the Marine Terrace where there is soil for foraging. 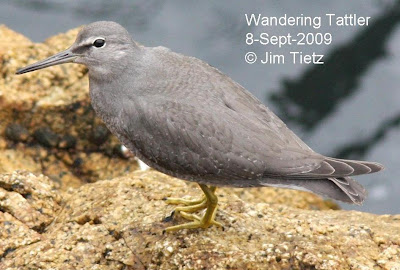 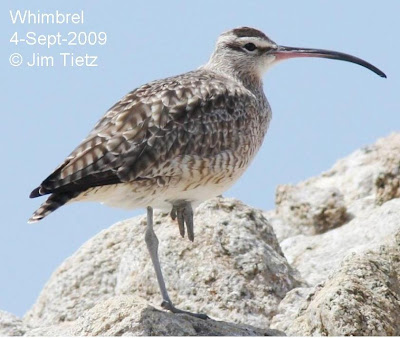 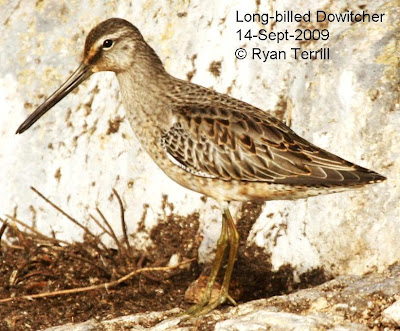 One group of birds whose numbers do not seem to be too adversely affected by the poor weather are migrant gulls. During the early part of the fall, large numbers of California Gulls migrate away from their inland breeding locations to overwinter along the Pacific Coastline or out on the open ocean. Hundreds of these gulls roost on the island each night. We have suspected that a large number of these birds originate from the relatively close Mono Lake or the burgeoning colony in South San Francisco Bay. On 8 Sept, we photographed a 2nd-year California Gull roosting on the Marine Terrace that was wearing a band. Three of the digits on the band (575) were legible. I contacted Kristie Nelson, a PRBO biologist who bands California Gulls at Mono Lake, and asked her whether it could be one of her bands. She said that they finished banding in 2008 with band number 945-57575. So it likely that the band I read was one of the 75 birds that had 945-575XX. 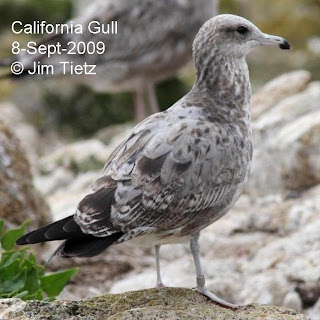 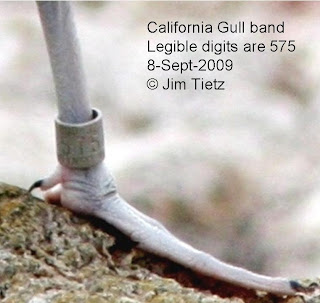 Frequently when we have even semi-decent weather, we see a few migrant insects such as butterflies and dragonflies. These two "ladies" are superficially similar, but if you look closely at the outer part of a forewing you'll notice that Painted Lady has two white spots along the leading edge while West Coast Lady only has one white spot. Over the last few years, Painted Ladies have been far more abundant than West Coast Lady. Although we're seeing a typical number of Painteds (n = 9) over the past 3 weeks, we've had >6 times as many West Coast Ladies as Painteds. Clearly this is a good year for West Coast Ladies! 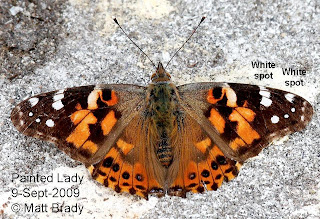 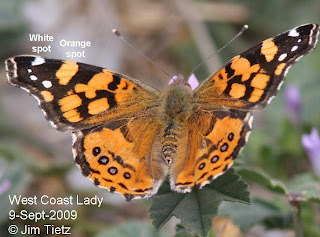 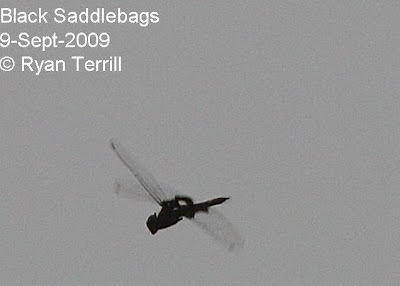 August 22nd marked the start of PRBO Conservation Science's Fall Season here on Southeast Farallon Island, when focus shifts from the spring and summer breeding seabird monitoring, to the Passerine migration and Great White Shark monitoring of the fall. PRBO Biologists that arrived on the Island yesterday were Jim Tietz, Ryan Terrill, Jill Gautreaux, and Matt Brady. One Seabird intern, Jordan Casey, will be staying with us to continue seabird breeding effort monitoring.

During this transitional time, several late-nesting seabird breeders linger on the island to feed their downy chicks. While others that either already fledged their young or failed at nesting, return to socialize and perhaps prospect for next year. Tufted Puffins are particulary abundant at this time of year and we frequently see them flying closeby the lighthouse and land around crevices in small groups and then appear to discuss its potential. 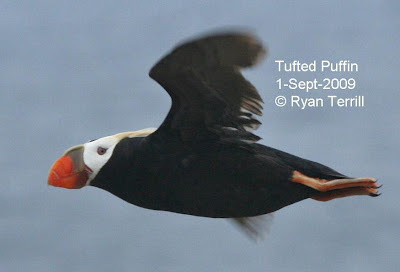 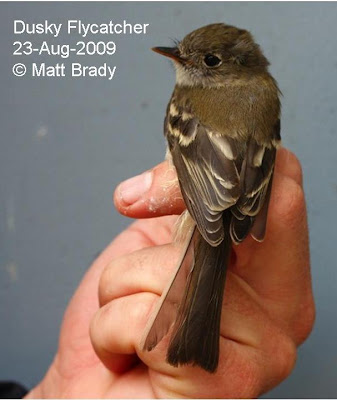 Although the weather over the last two weeks has not been condusive for many migrant to find the island, we have had a smattering of West Coast migrants and a handfull of vagrants from the East Coast. For the first few days after our arrival, we experienced decent weather with high cloud cover and light northwest winds. This allowed a few of the western birds to find the island such as a Dusky Flycatcher on Aug 23rd which is actually an unusual bird to the Farallones in the fall. In fact, there are fewer than 40 records of Dusky in the fall which is odd when you consider that we have over 100 records of Least Flycatcher - a very uncommon bird along the California Coast. It is believed that most Duskies fly along the inner mountain routes and mostly avoid the coastline. 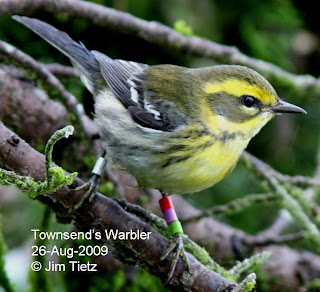 During late August and September, we typically capture large numbers of Yellow Warblers and Townsend's Warblers in our mistnets. We then colorband them so that we can better determine the number of days that each individual is present and better estimate the number of each species on the island.

In addition to these birds, a few other western birds were present such as a Rufous Hummingbird, a couple Hermit Warblers, Black-throated Gray Warbler, and both Western and Eastern Kingbirds. 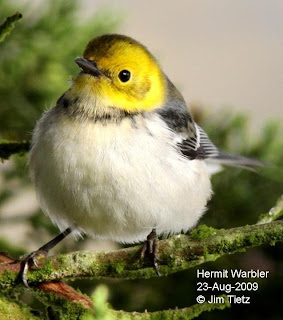 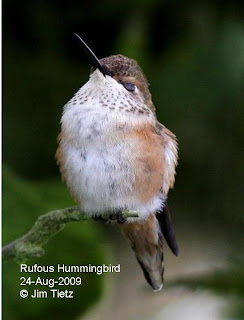 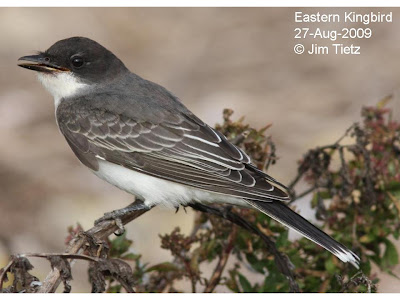 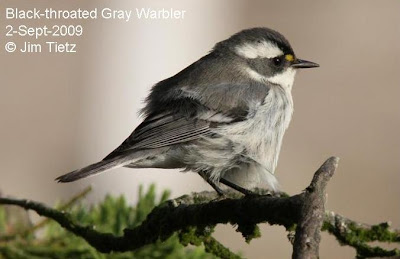 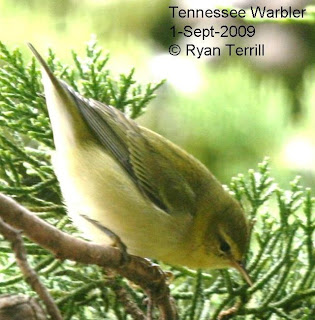 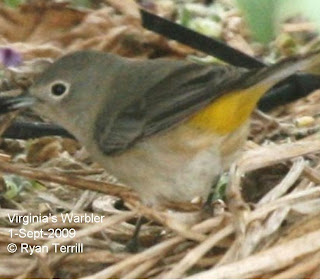 In addition to birds we also collect data on sharks, insects, bats, whales, fur seals, and anything else of interest. We’ll give some information about these other taxa in future blogs. 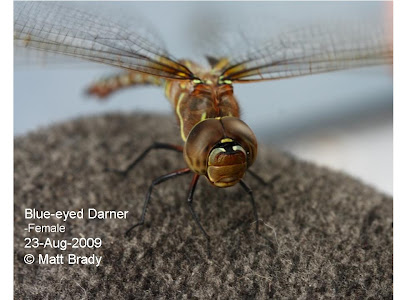