Every five days on Southeast Farallon, an overworked and windblown (but well fed) intern has to undertake the burden of what is euphemistically named the “Ashy Wing Walk.” This falsely conjures up images of a casual stroll while marveling at the flutter of wings as storm petrels dance like fairies around your head. If only. This walk is a survey for predated storm petrels – eaten by overwintering Burrowing Owls or nesting Western Gulls who take their territories very seriously. Usually all that is left are the bird’s wings. This task may seem a bit morbid, but it’s crucial to our studies of the Ashy Storm Petrel. This is a bird the size of a swallow that’s more like a miniature albatross. They are endemic to the California Current, can live well over 35 years and sometimes take until December to finish fledging their chicks. This species of Special Concern in California has shown dramatic population decreases over the past several decades, especially here at the Farallones – their largest colony in the world. 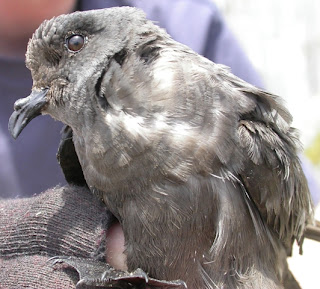 I call it the “Walk of Death.” I think of myself as the metaphorical cop walking her beat. It’s the same route every five days. I pace and rhythmically tap my mechanical pencil against my thigh and look for anything suspicious. My beat takes me across the Rubble Pile where Pigeon Guillemots breed, along the Helicopter Pad, up Lighthouse Hill and finally concludes at the old Egger’s House, the remains of the storage cache for murre eggs on their way to San Francisco during the Gold Rush. For the most part, it remains uneventful except for finding one or two slimy regurgitated wings, courtesy of a peckish gull. Good for the petrels, yawns for the intern.
Once in that rare while, my discoveries are a little more sinister. The first thing that clues me in, is an odor. No, it is not the smell of rotting flesh that pervades - I couldn’t say the same for the dead elephant seals, but a musty overpowering scent commonly secreted by tubenoses (Seabirds of the order Procellariidae - which all have large external nostrils). On high alert now, I look around nearby crevices until I find its source. Soon enough, when I peer into a gap in stone wall, I encounter what at first appears to be a pillow fight gone very very wrong. Further examination reveals a grim scene. 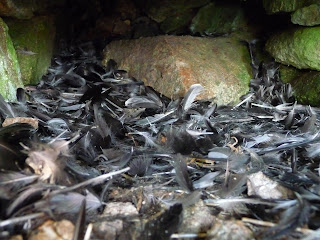 Inadvertently, a chill run downs my spine, it’s the Farallon version of an episode of CSI . After the collective gasps of horror, comes the gruesome task of reaching in among the carnage and hand picking out the individual wings. This allows us obtain an accurate estimate of the number of storm petrels killed. The largest collection we’ve found this year is twenty wings in one roost.
The next question you ask, who is the culprit? A Peregrine Falcon? A Raven? An extra hungry gull that isn’t satiated by a diet of anything and everything? No, my fellow sleuths, the perpetrator lies hidden within this photo: 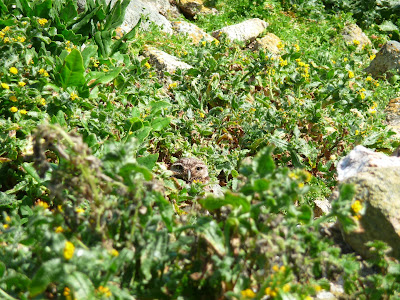 While they rate very high on the cuteness quotient, overwintering Burrowing Owls are major predators of storm petrels during the spring, after abundant house mice have their seasonal population crash. Western Gulls also take many storm petrels throughout a breeding season. Predation is a part of life for all the Farallon seabirds, and studies like the wing walk are key to our understanding of these important populations. Death is just a part of everyday experience out here.
2 comments:

Another new breeding species on the Farallones!

Over the last few seasons we have seen an influx of new breeding species on the island (or at least a return of some species that had not bred here in a very long time). First were California Gulls, which suddenly started breeding on SEFI during 2008. This was not only a first for the island, but also a first record of this species breeding in the marine environment.
Then last year Peregrines nested for the first time in 100 years. Earlier this season we saw evidence that Common Ravens were nest building on Arch Rock. They last bred here in 1911. Though we haven't been able to get around to where we think the nest is, we are fairly certain that they are at least attempting to breed (we will post an update on that once we confirm the nest).

On May 7th, we found a new species that was somewhat unexpected. It is a species that has never before bred on the Farallones and would not typically be thought of as a species you find on an offshore island. 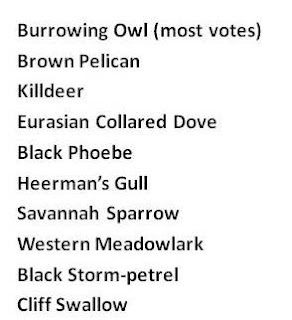 Now, before we tell you what it is (and no fair scrolling down!) we thought we would tell you about a little experiment first. You see, the biologists that work at PRBO are a pretty savvy bunch and certainly have a great wealth of knowledge about avian breeding biology. So we decided that we would let them weigh in on what species they thought could conceivably start breeding on the Farallones. This would not only be a fun test of their ability to predict species distributions (well fun for a geeky bunch of biologists like us anyway), but would also help us to generate a list of other species which are likely to breed on the island at some point in the future. Just to make it a little more interesting, the first person to name the new species wins a prize.
We received many entries from biologists across PRBO and had many good suggestions, often accompanied by detailed accounts of why that species might be found on the Farallones. From these we have generated this list of the top 10 theoretical breeders (listed in order of most votes received).
There were also two species – Rock Wren and European Starling – mentioned by several folks as likely breeders. These species have bred on the island in the past, so we will consider them the most likely to do so again.
These are all good guesses and there are a variety of reasons why each of these species might be expected to breed on SEFI. But none of them were correct. In fact only one person guessed the correct answer. 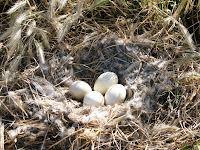 Canada Goose often pass over the island in the spring and fall as part of their annual migration and it is not unusual to see a pair hang around for a short while in the spring. But, they generally prefer marshes and open grasslands (or lawns at your local golf course) to rocky offshore islands. However, these geese have been spreading rapidly along the coast in the past decade and have been found breeding at several locations where they would not normally be expected. Although there are still abundant grasses this time of the year, they will dry out and disappear by mid-June, leaving the geese without a reliable food source when their chicks hatch.

Then again, it is likely that their chicks will just be gobbled up by the ravenous Western Gulls – as has happened for every California Gull chick hatched thus far on the island. But Canada Geese are big and can be very aggressive when defending their young. So maybe they will have a chance. We will keep you posted on their success as well as the next new species to breed on the Farallones. Will it be one of the species on the list above or will it be something totally unexpected? On the Farallones, anything is possible. 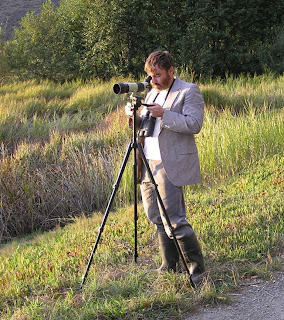 Back in December, we told you about the demise of the crane at East Landing (see It’s big, it’s blue, it’s broken!). This is our main way of getting people and gear on and off the island. The ocean around the Farallones can be very rough, especially during winter storms or high swells and there is no safe place to land a boat. So we use the crane to lift all people and gear up onto the island. Well, after 21 years of faithful service (and constant battering from a truculent ocean) the crane had suffered a great deal of corrosion and needed to be replaced.
The old crane taking a beating during an early winter storm
Replacing a 20 ton piece of equipment on a remote island is no easy task. Biologists are a generally handy group of folks, but in this case, we needed to call in the experts. So the USFWS called up Sheedy Drayage, the company that installed the crane in 1989 and worked out the complicated logistics of removing the old crane, getting it repaired and then getting it back to the island. This required the assistance of the Air National Guard and Aris Helicopters to lift the heavy crane parts and transport them to the mainland for repairs.Then of course they also had to get them back to the island after the repairs had been completed.
Of course, getting the new crane back to the island was only the first step. The tricky part was getting it re-assembled and installed at the landing. This required good weather, perfect timing, great balance and a whole lot of rigging to temporarily secure the various parts until everything was safely bolted together in its proper place. To most of us this would seem a Herculean task, but for the intrepid crew from Sheedy and the experienced pilots from Aris, it was just another day at the office.
When the crane disappeared from the island in December, many of us worried that it would be many months to a year before it could be reinstalled. But, thanks to the tireless effort of USFWS personnel, efficient work by Sheedy, tremendous assistance from Aris and the Air National Guard, and lots of good luck, the new and improved crane was returned to the island in mid-March. This one looks a little different. It is galvanized to help prevent the corrosion that caused the eventual demise of the old crane, but it works just the same.
Needless to say, island residents are extremely happy to have the crane back, allowing us to safely and efficiently conduct landings, even in rough spring conditions. We would like to thank Zach Coffman, Gerry McChesney and Mendel Stewart of the US Fish and Wildlife Service, Al Pietrocelli and the crew from Sheedy, the Air National Guard, Aris Helicopters, the National Park Service and all those who contributed in one way or another to making this immense project happen.
2 comments: