Dream big. We woke up early on the island - 0430 or was it 0330? It didn’t matter because it was apparently already the end of the world. Nick, Kathy, Erin and I walk around the island blindly. There was  an eerie calm to the air. No seal lion barks, no Western Gull calls and no pounding waves crashing into the intertidal. We all agreed that something iwas wrong. As we headed to the light house to get a better view of the island Nick brought up the rear. Out of nowhere a loud scream comes from below. As I turned around I am knocked to the ground by Erin blasting by me up the trail. Come to find out Nick had transformed into a zombie and was happily eating what remained of Kathy. I turned up hill to escape Nick’s wrath and join forces with Erin. As we approached the Light House we could see that the city of San Francisco was on fire. I flipped on the power to the marine radio and tried to hail the Coast Guard on channel 16. No response. Erin and I barricaded the Light House door to hold off Nick as long as possible. It was futile as he had gained super zombie strength during his transformation. One blast to the door and it was off its hinges. As he came for us an alarm came over the marine radio. Beep, beep, beep, beep …

I startled awake and shut my alarm off. It was time for 0600 weather in the driving rain. Better than being eaten alive by Nick I suppose.

Our quiet little island community survived the zombie apocalypse after all - not that we were that worried about it (hence the island anxiety dream). Speaking of quiet, that is not how we started our winter season. 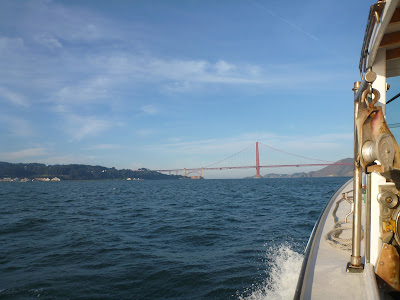 We departed for SEFI from San Francisco at 0830 Saturday December 8th 2012 on the “Sari Ann” with Alan Weaver and Warren Sankey, both of whom are gentlemen and scholars. Sea conditions were excellent and we had a fast ride out arriving at the island around 1030. But what a difference it was compared to the last couple of seasons. In a collaborative effort involving many organizations there were a total of 15 people on the island working on projects related to the island’s mouse eradication project. During a normal Fall to Winter seasonal switch we have the 4 winter crew members replacing the eager to depart Fall crew. What usually starts out as a quiet winter season was replaced with the buzzing of 11 other bodies swarming every nook and cranny of the island. During their stay on the island we may have broken an island record with everyone around the dinner table at the Coast Guard house. It certainly made for a welcome change of pace in comparison to previous years. However, one week after our arrival the busy island dwindled down to the 4 winter crew members. This year’s team consists of Kathy Leone, Nick Sisson, Erin Pickett and me, Ryan Berger.


Joining us from Western Massachusetts, Kathy graduated from the State University of New York at Binghamton with a B.S. in Environmental Studies.  Since she graduated, Kathy has been involved in a variety of work, travel, and volunteer experiences, primarily focusing in outdoor education and field biology.  Kathy spends her summers in South Africa, where she co-leads student trips with Raven Adventures, studying the behavior of big cats in the national parks.  In addition, Kathy also works with a conservation nonprofit in Namibia, focusing on the rehabilitation of large carnivores such as wild dogs and cheetahs.  When she is not in Africa, Kathy might be found working as an outdoor educator in Pennsylvania, being a ski bum in western Mass, researching Great White Sharks and whales in South Africa, or volunteering at the Aula Global Biological Reserve in Costa Rica.  Kathy is excited to join the SEFI Winter 2013 team and is looking forward to a great season!


Nick Sisson is out on the Farallones for his first elephant seal field season, he hails from Hull, MA however he completed his undergraduate work at nearby UC Santa Cruz (B.A. Environmental Studies 2012). During his time at UCSC, he was most interested in the ecology, conservation and policy aspects of his department. He worked with a postdoctoral researcher on a study about marine telemetry research on large vertebrates and its uses for improved conservation practices, as well as interning with the Salmon Ocean Ecology Team at the NOAA Southwest Fisheries Science Center. Back home on the East Coast, Nick has worked on a commercial lobster boat and at a local yacht club for many years and enjoys sailing, surfing, diving, skiing, and hiking. He has also worked with NOAA’s Stellwagen Bank National Marine Sanctuary while back home on a project about internal waves and their affect on marine mammals and was most recently studying Pacific sand lance feeding ecology at the University of Washington’s Friday Harbor Laboratories.

Erin also attended UC Santa Cruz and skipped classes occasionally, but only to catch the sunrise and assist in Northern elephant seal research at Ano Nuevo. Three winter seasons and one B.S. later, she was pleasantly surprised to discover that she could put these experiences to use back in her home state of Hawaii, so there she went. Her first season with the Hawaiian Monk Seal Research Program was a 7 month stint on Laysan Island, where she became dangerously addicted to white sandy beaches and blue waves. Since then she has divided her time between working in Santa Cruz and Hawaii, on a variety of projects relating to marine mammal population assessment and conservation. So far she loves it here and will probably never tire of the barking eseal pups and surfing sea lions.


I’ve done this rodeo before so I will spare my details only to say I am very excited to start my third winter season on the island, pumped about the dynamics of what this year’s crew has to offer and of course I can’t wait to get reacquainted with our lovely elephant seals. Here is the low down on SEFI’s elephant seals so far.

It has been a slow start to the season which has afforded us plenty of time to get oriented to island life and catch up on backlogged data. So far we have had only three cows show up in our breeding colonies. The first to arrive was Shelly who quickly settled into our Sand Flat colony. Shelly was tagged for the first time at the end of last season so we don't have a life history profile on her but we do know that she did not pup last year. But she gave us an early Christmas present by being the first cow to pup when she popped out a cute little nugget on December 18th (also the same date as my niece’s  and nephew’s birthday – Annika and Joshua). As such the pup has been appropriately named A.J. in their honor. This pup is three days earlier than last year's first pup.

Next to arrive was an untagged cow who we were able to mark with dye -02. Applying dye to the seal's fur does not harm the animal and allows us to follow that individual throughout the season. -02 held out for nearly a week before squeezing out her pup which was born today. Our third cow was the first to arrive last season. Prima was tagged on SEFI as a cow in 2010. She has yet to pup and it doesn't appear that she is pregnant this season either. She departed early last year and we were not able to confirm if she mated with a harem master. With that said I have sad news to report.

After successfully defending the most productive harem on SEFI for 4 straight seasons we are mourning the loss of our favorite big guy, Rusty. He was such a stud of a bull elephant seal and we are sad to see him go. We pay him the utmost respect as it is fairly rare for a male elephant seal to even become an alpha male let alone hold that position for more than one or two seasons. A candle light vigil will be held in his honor at season's end. As was expected after witnessing many battles last season, Herzog has now taken over as alpha male on Sand Flat. Herzog we wish you few fights and many cows.

Unfortunately we don’t have access to the entire elephant seal colony at the moment because the skittish California Sea Lions have returned to the area and are using it as a daily haul out site. Unlike the elephant seals that couldn’t care less about a human’s presence the sea lions will stampede back into the water if they see humans walking around. And since we are trying to have as little impact on the wildlife here on SEFI we forfeit the right to get closer to the elephant seals for tag resights and other data collection tasks. The previous two season have also started out like this but as soon as more cows show up, produce pups and become more aggressive it seems to drive the resting sea lions to other haul out spots around the island. But back to my initial point.

With less access to our colony we have not been able to accurately assess what is happening in our Mirounga Beach harem. We are able to make out the backs of a few large males in Mirounga Beach but cannot confirm who they are or if they have any cows sharing that space. Which means we have no idea if MC Hammer is back for another season? Although I think it is safe to say that we wouldn’t mind if he didn’t return after his rampage of the weaned pups last season. We have noticed that a SA-4 named Guthrie has been hanging out on Omega Terrace near Sand Flat but he seems apprehensive about making any attempts at dethroning Herzog. Guthrie has changed his orientation on Omega Terrace but has probably moved less than a foot since we’ve arrived to the island. Pretty lazy seal or is he smart if he is conserving his energy and waiting to do battle when more cows arrive?

Well enough said for this blog. We’ve had some strong storms move through the area over the past few days which delayed our supply boat from making it out today. However, we have a backup plan and will be very grateful to Harmon Shragge and crew on the “French Kiss” if they can make it out on Monday just before our Christmas celebrations. We are gearing up for a great feast. We’ll update with another blog soon to tell you what else we’ve been up to. Happy Holidays from the Farallons.