March 11th marked the end of the 2014-2015 SEFI elephant seal breeding season. Pup -91 was the last to wean. This year we had 93 cows, 67 of which pupped. Of those 67, 42 successfully weaned.  When going through our data, we noticed that there was higher pup mortality this winter season. One reason for this could be that more cows pupped in Mirounga Beach, a narrow inlet that doesn’t allow for much movement during tidal surges and storms. This resulted in multiple pups being crushed or washed out to sea.

Another bit of information to take into consideration is that Andre, the bull in the area, moved between Sand Flat and Mirounga Beach rather frequently this season, which may have led to an increased movement of males and thus a greater chance of crushing pups.


This winter season was quite warm compared to previous years. During warm days, cows, pups, and weaners would often congregate in the water puddles near Breaker Cove, an inlet just below Breaker Terrace and Sand Flat. As many pups and weaners moved close to the edge to seek out cooler temperatures, they fell into the cove. Since the weaners are unable to swim at this point, those that fell in were washed out to sea.

As for the other pinnipeds on the island, the number of California sea lions has increased dramatically in the past couple of weeks. It is becoming harder to access certain areas on the island without disrupting them, so we have been very cautious not to disturb them.

This past Saturday, March 14th, was the end of the 2014-2015 SEFI winter season. During our last week, we decided to make corn hole boards to leave on the island for the future interns and biologists. After many hours in the ‘carp shop’ and sewing bean bags from old pillow cases, they were finally complete. We decorated them with a spray painted elephant seal and common murre. We finished them just in time to get a few games in for ourselves.
It was hard to say goodbye, but we will forever have such wonderful memories of this past winter on SEFI.


As hard as it is to say goodbye to the elephant seals and the winter crew, we welcome the seabird season and its crew whole-heartedly. Most of the work we have done so far is maintenance and gearing up for the busy season ahead. We have been cleaning out and repairing the 447 Cassin’s Auklet boxes scattered throughout the island. We found our first Cassin’s in one of the PRBO boxes near North Landing last week, though it was without an egg.

Things should pick up as the seabird season gets underway, so check back soon for further updates!

Tristram's Storm-Petrel back on the Farallones!

Today our 2 new interns (Sean and Eva) found this fresh storm-petrel carcass (killed by a Burrowing Owl) on our first storm-petrel predation survey of the seabird season. Upon seeing the bird, I did a double take at it’s massive size and knew immediately that this was not one of the Ashy or Leach's Storm-petrels that breed on the Farallones. After taking several morphological measurements and consulting with Peter Pyle and his extensive datasets on storm-petrel morphometrics, we have concluded this is a Tristram’s Storm-Petrel (Oceanodroma tristrami). The combination of morphological measurements collected from the specimen (including wing length, tail length and leg size) rule out all other likely species. This is a Hawaiian/Central and Western Pacific species which only has 2 previous North America records. The first of which was an individual that was caught in a mist net on SEFI in April of 2006. This is further evidence of warm water conditions in the Gulf of the Farallones this year and the corresponding occurrence of more tropical species. This specimen's unfortunate demise also highlights the challenges we face with Burrowing Owl predation on Farallon storm-petrels.
-Russ Bradley, Farallon Program Manager 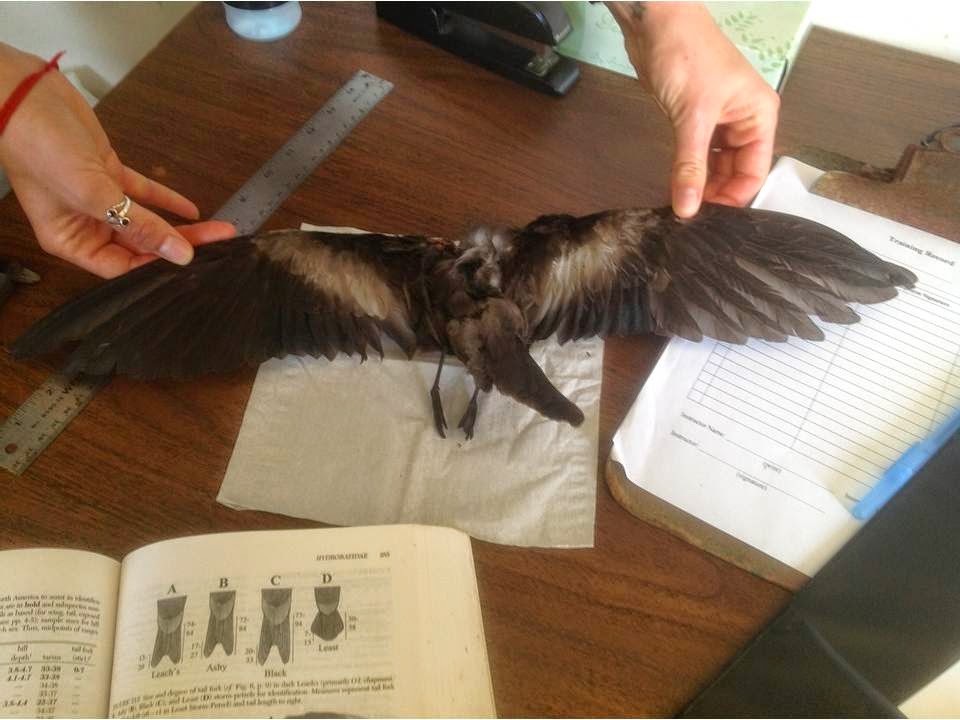 
Whilst we focus on researching the breeding elephant seals during the winter season, there are many other aspects to our daily data collection. One of which is looking for whales and dolphins from the lighthouse. We try to carry out at least two cetacean surveys a day, although this depends on weather conditions, especially sea state, and visibility. These surveys include an hour of effort, covering 360 degrees around the island.


We use wide-angle binoculars with a built in compass and reticule to calculate the location of animals, a high powered scope and a trained eye to sight and confirm the identification of species. In addition to these optics, we use technology to our advantage for data recording. In place of pen and paper which are likely to blow away in some conditions, we have adopted the use of an iPad application to store sightings. Spotter Pro by Conserve IO allows us to note the species, number of individuals including if calves are present, the behaviour, and any additional information relevant to the sighting.


The data that is uploaded from our sightings is coupled with those of other researchers and of the general public, integrating standardized research and “citizen science”. The app can then alert ships in the area with the app to the cetaceans’ presence, allowing boat users to be extra vigilant to avoid ship strikes. The app is available on apple platforms: https://itunes.apple.com/us/app/spotter-pro-field-data-capture/id651453350?mt=8

The collected data can also be used to investigate seasonal and annual variations in occurrence of species, testing it against environmental covariates such as water temperature and tidal cycles. As mentioned in the last blog, some species are struggling to find food due to warmer waters associated with El Nino events, and anecdotally we have seen a difference in cetacean presence, with no blue whales being seen this season, compared to multiple sightings last year. It will be interesting to find out how this event affects species distribution throughout the year.

During a recent cetacean survey, we observed a feeding flock of several hundred gulls following approximately 400 Californian sea lions who were porpoising towards the island, fast! A huge fin cut through the water amongst the chaos, and we saw the unmistakeable eye patch of an orca.

The sea conditions were perfect, so we were able to put our SAFE boat in the water at East Landing, which has recently returned to an operational state with a replacement generator. We followed the pod of four animals at a respectful and legal distance for around an hour, first going south, and then looping back towards the island until the pod moved off to the west. There was a large male, a female, and 2 smaller individuals which we think to be a juvenile and a calf.

This was by far the best animal-related experience of my life thus far, and the whole team hasn’t stopped smiling since. We are very lucky to live in such an amazing environment where such things can happen, going from looking for birds and logging whale sightings to keeping pace with Orca on the water. The winter season ends in a week, and it has been an amazing experience which I’m sure we will never forget.