Often when you hear about mist netting, it brings to mind images of delicate perching birds, like warblers and thrushes, hanging in mesh before being picked out by biologists.  We do our fair share of this on the Farallones as fall brings waves of vagrant land birds out to the islands.  However, as the seabird breeding season extends into July and rhinoceros auklet chicks need feeding, our mist netting takes on a completely different character. 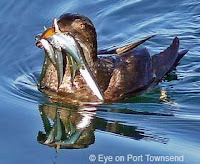 Rhinoceros auklets, so named for the horn they sport on their bills during the breeding season, are not actually proper auklets.  Rhinos are much more closely related to puffins, as evidenced by their larger size and fierce bite.  They also carry fish back to their chicks in the classic puffin fashion, with rows of horizontally arranged fish hanging out of their bills.  Rhinos ferry these fish back to their chicks in burrows the adults excavated at the beginning of the breeding season.  These feedings take place at twilight throughout the month of July.  This is where the mist nets come in.

Right after dinner, we place a net just in front of occupied rhino burrows, lie flat on our backs, and wait quietly for the birds to hit.  And, careening through the air at speeds up to 35 miles per hour, they really do hit the net.  Rather than flitting gently into the mesh, rhinos crash into (and sometimes through) it, like feathered meteors.  Upon impact, we jump up and race to grab the bird and whatever fish it’s brought with it.  If you wait too long, your quarry is liable to escape or inflict serious damage to the net.  With their scissor bills, strong wings, and powerful heft, rhinos can shred a net in no time.  These same qualities make them a challenge to handle and they have been known to draw blood from an errant finger now and again. 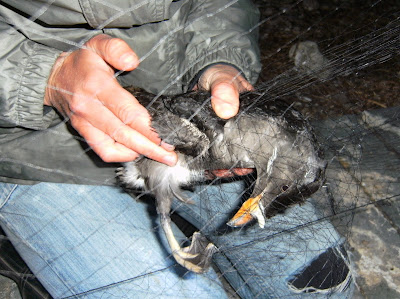 Extracting a rhino from the net 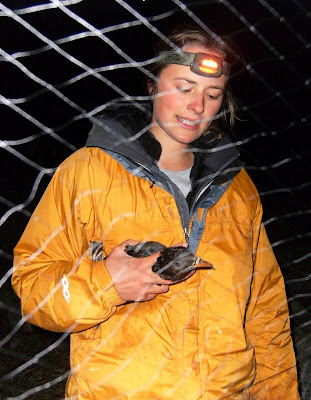 An intern with a handful of rhino 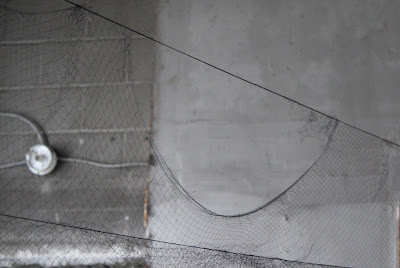 Mist net post-rhino
Still, the data we collect from these uniquely intense mist netting sessions are invaluable.  All the birds that we catch in our nets are banded as part of a long term mark/recapture study to investigate survival and population trends. All birds are also weighed and measured in order to determine their sex (males are slightly larger and have a deeper bill) and overall physical condition.  Some birds have been returning to our nets since 1988! 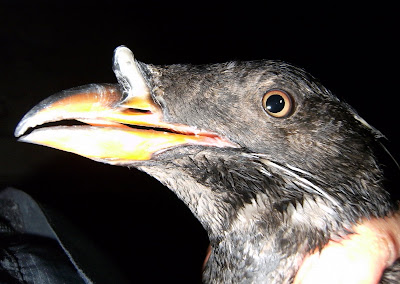 Rhinoceros auklet in breeding plumage with horned bill
The fish collection serves as an indication of what prey species are common in the rhino chick diet in any given breeding season.  Fish are identified to species, weighed, and measured, which helps us determine how much prey chicks are getting fed.  We can also determine which prey species are correlated with successful breeding seasons where high proportions of our followed rhino chicks fledge.  These data can also tell us a lot about the populations of the fish themselves. The species that are common in the diet tend to be those that have healthy local populations. When one species that is normally common in the diet is suddenly absent, this lets us know that the populations of those fish may be declining. 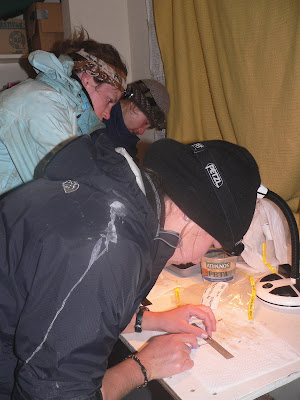 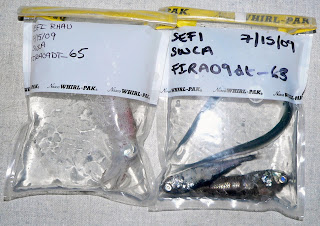 Diet samples with squid, Pacific saury, and myctophids
Thus far, the northern anchovy, a perennial rhino favorite, has been largely absent.  However, the plethora of Pacific saury and squid we’ve been seeing this summer bode well for the current cohort of rhino chicks.  With any luck, they’ll gain enough weight to fledge by early August and turn up throughout the Gulf of the Farallones National Marine Sanctuary and beyond this coming fall and winter.  In the meantime though, we’ll be staying up late to catch rhinos and document their diet.
5 comments: