There is nothing more exciting than cute little baby chicks! Right?!? Right!!!!


Three species that have already fledged some chicks are the Common Murre, the Cassin's Auklet, and the Pigeon Guillemot.  The Rhinocerous Auklets haven't fledged their chicks quite yet, but are getting close! 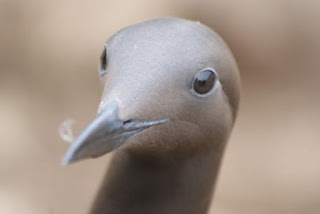 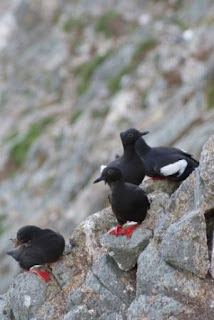 When chicks first hatch, they're covered in down, which is really really soft and makes them look like little puffballs of happiness!
The Pigeon Guillemot downy-feathered chick is jet black and weighs about 35 grams when we first weigh them.  They also have a lot of attitude, so like to scream a lot. Finger-wagging them doesnt improve their behavior; usually they'll just bite. 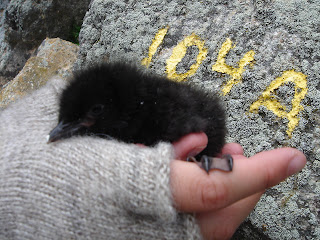 The Cassin's Auklet downy-feathered chicks is grayer than the Pigeon Guillemot, and their sites are monitored in the boxes with removable lids. 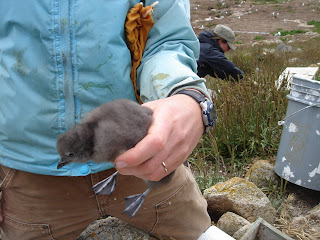 The Common Murre downy-feathered chick looks like it has that sweet '90's frosted hairdo that only the coolest guys in town could pull off. 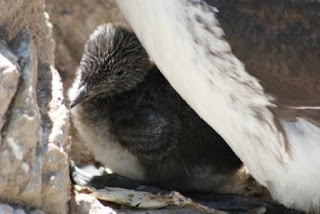 The Rhinocerous Auklet chicks are really puffy and also black. 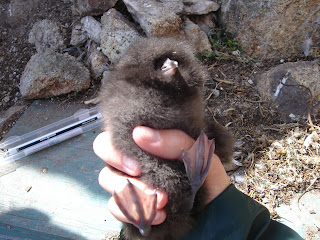 Soon after the chicks hatch, we try to figure out what the adults are bringing back to feed their young. This helps us to understand what is going on with fish populations in the area, and how they affect breeding seabirds.How do we do this? In different ways for each species of course!
For the Pigeon Guillemots, we sit at Garbage Gulch and Lighthouse Hill (alternately), and watch the whole fish that the adults bring back for their young, and record 1) the site they went to, 2) the type of fish they brought in, 3) the size of the fish (approx), and 4) the adult's band combination. Here is Russ, Annie, Jessie, and Michelle in the middle of a shift change at Garbage Gulch. 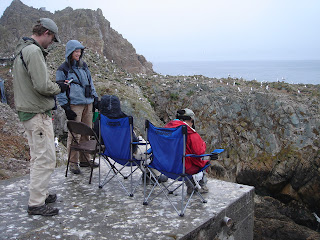 We monitor Common Murre diet from the Murre Blind above the Upper Shubrick Point study plot. 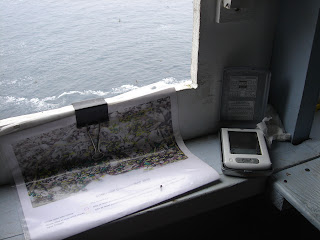 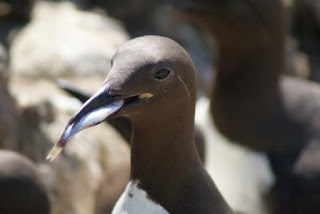 This is an adult murre bringing back a rockfish, the fish of choice of 2010! 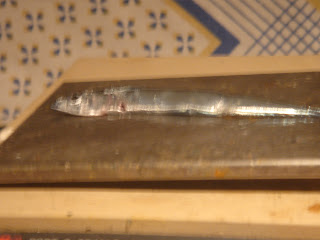 Netting for Rhinocerous Auklets at dusk is a two-fold effort. First of all, it is a mark-recapture, and secondly, it allows us to see what fish the adults are bringing back for their chicks since they drop the fish when they are captured in the mistnet. We collect their fish and process them after we close the net.

Cassin's Auklet diet is a little different, since it doesn't bring back whole fish like the other three species do. In fact, they don't feed on fish at all! They eat krill! They regurge it back up for their young when they return to their colony at night, and we collect 100 samples of this regurge every year for lab analysis. 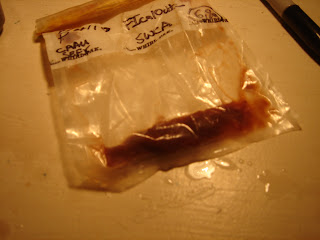 We continue diet watches and diet collections until the chicks fledge and can forage for themselves.

Most of the murre chicks have fledged or are about to fledge. 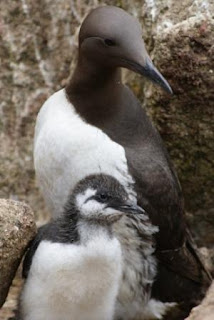 The transformation that chicks go through is astounding. After just 25 days, the Pigeon Guillemots have grown from 35 grams to 500 grams! Monitoring the growth of chicks is another indicator of how well their parents are provisioning them. These feisty, poopy suckers sure love to eat. 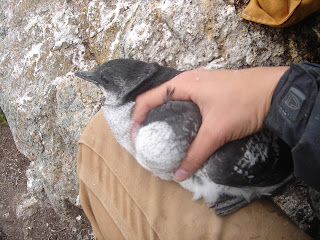 This is a fully-feathered Pigeon Guillemot chick.  Look at its bulge of fat! It must be getting fed a lot!

We've just started banding a few of the Rhinocerous Auklet chicks, as they're approaching their mostly to fully feathered stages. 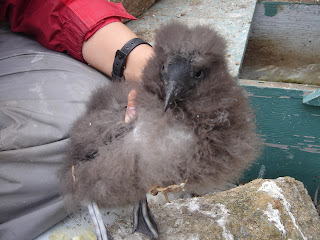 Rhinocerous Auklet chick, partly to mostly feathered but still has quite a bit of down

The Cassins Auklet seem to be having a wildly productive year - the majority of them have fledged their first brood of chicks and are currently sitting on their second broods! 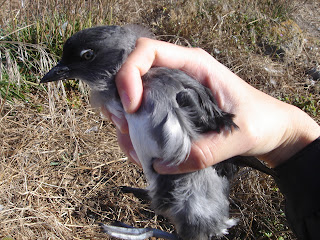 Birds obviously undergo a wild transformation in the few weeks that it takes for their parents to raise them to a point where they can either fly or take them to sea, and it takes an enormous amount of energy and risk on both parents' part to feed their chicks to their nesting site, yet they spend this energy and take these risks to raise their offspring to fledge. Let's hear it for mama and papa birds!
2 comments: