Saturday, November 27th 1993. The Farallon journal (our island diary) lists "Black Brant: 1". One Black Brant seen on the island that day. Unbeknownst to the biologists, with this simple entry they recorded the starting of a Farallon era, the era of Molly.

At first glance Molly appears to be a common specimen of the species Branta bernicla nigricans (Brant goose or Black Brant). A species that is described as “small and dark with bright white around tail, about 25 inches in length, weighing about 3 pounds. An almost exclusively coastal goose, found in flocks on shallow bays and marshes, feeding on eelgrass.” 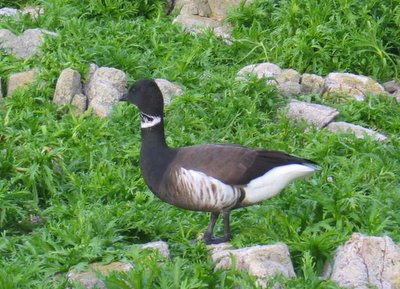 But Molly is more than your average Brant. As time went on, it became apparent that this Brant was not just some flyby migrant, she was here to stay! Not only does she not seem to care about the company of her own kind (during migrations many Brant stop on the island for a day or so), she apparently prefers the company of Western Gulls. Gulls are not very fond of other birds tresspassing on their territories and any other bird is chased away. But Molly (or “La Molly” as some Farallon biologists call her) taught them that she is no pushover, coming at them with her head low and her neck stretched out, hissing. The gulls never stood a chance. 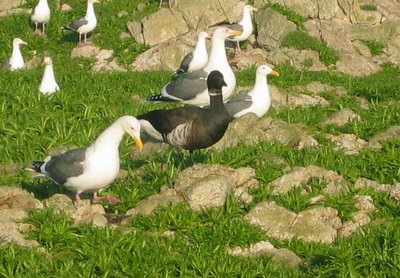 So now, the gulls accept Molly as one of them, nothing to be surprised about and just the way it has always has been. She is sometimes seen foraging on algae in the intertidal, but mostly she stays among the gulls, nibbling at Farallon weed or spurry. Everyday between fall and early summer Molly can be seen at her preferred hangouts, by the old foghorn system or on the Marine Terrace next to Sandflat. We will know she has gone completely gull when she starts scavenging on the dead elephant seal pups.

Several years back Molly seems to have had an accident of some kind while she was away, because she came back sporting a little limp that has persisted to this day. Then, 2 years ago Molly was believed dead because she was not seen for several months. There was even a “Molly Memorial” picture posted in the living room. Then, like nothing had happened, she was seen again waddling along with the other gulls – and our 10 year anniversary party was saved!

So now, for over 12 years, Molly has made every day out here more special, seeing her makes our day. Like overprotective parents not seeing the Farallon mascot in 24 hours makes us nervous. Her long coexistence with the gulls is a model to us all on sharing this special, fragile habitat with the seabirds, seals, and sea lions that call the Farallones home.