Back to the Elephant Seals 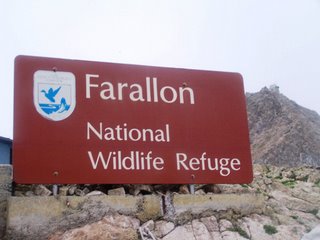 December 2 marked the annual turnover of biologists from fall to winter crew at Southeast Farallon Island (SEFI). From mid-August until early December, PRBO researchers spent their time watching for white shark attacks from Lighthouse Hill and monitoring the hundreds of species of birds that stop over at the on their fall migration. Now, the last of the fall migrant birds have moved on and the sharks have made their way elsewhere. The winter biologists have arrived and set up camp to continue PRBO’s important long-term (30+ year) research on the ecology of the fascinating northern elephant seal.

December is the beginning of the breeding season for northern elephant seals, one of five species 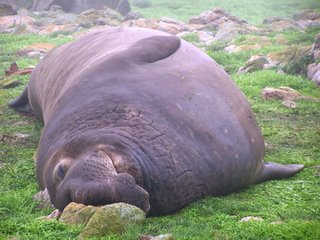 of pinnipeds (a group of animals that includes seals and sea lions) at SEFI. Northern elephant seals breed on western North American islands from Guadaloupe Island of Mexico to the Farallones and some coasts (such as and San Simeon). The genus Mirounga, which includes northern and southern elephant seals, are the biggest pinnipeds in the world, with males typically reaching 3,500 pounds and some topping the scales at more than 5,000 pounds! See the picture of Rusty, one of our larger males (but not yet a bull): since he won't eat for more than 3 months while he is on land, he is saving his energy...by sleeping nearly all day long!

Before the adult elephant seals arrive for the winter breeding season at the Farallons, they’ve been out at sea for several months, foraging mostly for squid off the coasts of and thousands of miles from their breeding and molting grounds. Because they travel back and forth twice per year – once to molt and once more to breed – elephant seals make the longest known annual migrations of any mammal in the world.

While at sea, elephant seals spend a surprising amount of time deep underwater. Scientists have discovered that these wonders of evolution spend 90 percent of their time diving, typically for about 20 minutes each dive, and coming up for air for only 2 or 3 minutes before heading back down again. The seals have a number of adaptations that enable their bodies to withstand the high pressures deep underwater. In fact, depth helps them to store fat more efficiently because their metabolism slows down due to the cold and water pressure at depth – they even sleep deep underwater.

By some estimates, females gain a kilogram a day while out at sea. They are trying to fatten up for the two month-long fasts they will make, especially for the winter breeding season where they will lose up to half their body weight nursing their hungry pups.

During the fall most of the elephant seals on SEFI are immatures, which are generally less than about 4 years old. The picture below shows two immature elephant seals hanging out together. The graph shows the average annual numbers of adult female (dashed line) and immature (solid line) elephant seals on the island – you can see how many immatures are here in the fall, which is why it is also the time of most shark attacks. 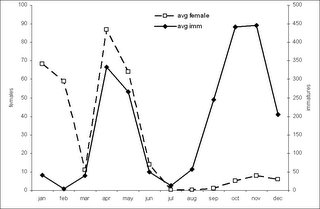 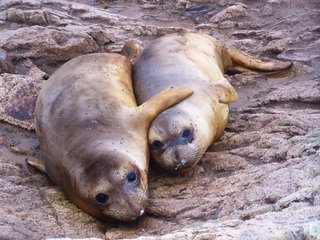 To date, we’ve had 6 pregnant cows arrive at SEFI, but no pups yet. 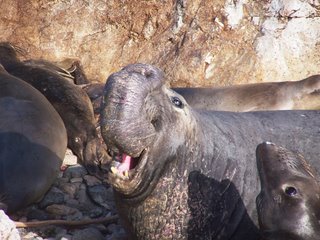 This is in contrast to last year, where we already had a pup born on December 8 (the earliest ever recorded here). A "harem" is beginning to form at Sand Flat, with Nero – last year’s reigning bull there – fighting off the other smaller males for his right to mate with these females once their pups are weaned. But that is a long way off and new big males are arriving every day. Will there be a bull that dares to challenge Nero? Here, Nero announces his presence to the others with a loud, resonant snort through his massive nose.