It's Journal Time!
Out here on the island, there is a long standing tradition of recording all of our daily activities in the Farallon Island Journal. After our scrumptious dinner, we sit down to write in the journals and shout out whatever we have to add. PRBO biologists and interns have done this every day since June 7, 1967. At the end of the year the Journal is bound and becomes part of the island archives. This gives us the opportunity to look back at any given day and see who was here, what was happening on the island, or what birds were present. 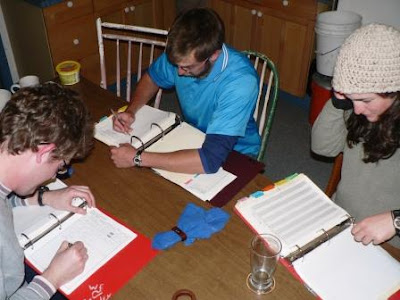 There are a total of three journals which comprise the official Farallon Island Journal: 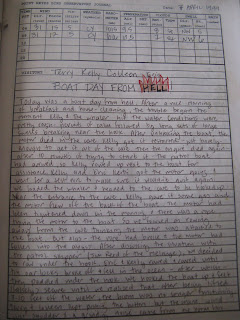 The first journal contains everything of relevance that happened that day, including weather, rare animal sightings, and common activities. This journal is very helpful if you are wondering about some event that occurred on one particular day. For instance, on April 7, 1999, there was a very interesting boat landing, and by interesting, I mean horrible. Here is a taste of that fateful day, “Near the entrance to the cove, Kelly gave the motor some gas and it flew off the back of the boat. The motor had been tightened down in the morning and there was a rope tying the motor to the boat. So we focused on rowing away from the cove thinking the motor was attached to the boat. But alas, the rope had broken and the motor had fallen into the abyss.” Everything that occurred in one given day is recorded and kept for future use. We also use this journal to keep track of who was on the island or who visited the island. 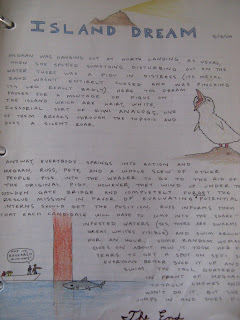 The second journal includes many different topics, from breeding birds to maintenance, butterflies to boats, or unusual events to dinner, not saying that the two are at all related. It has also become a tradition to record the dreams of island inhabitants if their dreams are related to the island, take place on the island, or if they involve some sort of dream bird. This tradition has been going on for seven or eight years, and that is a lot of time for a lot of people to have some pretty interesting dreams. Some dreams seem to be stress related, “Annie dreamt that the island vegetation was at least waist high and growing fast. She was worried that we would not be able to find our way around the island or locate study plots”. While others are just absurd, “Russ had a dream that wherever he went, jungle, city, Movie Theater, there were Murres milling about in large numbers being counted. Not just Russ was doing the counting either. Little old ladies were leaning out their apartment windows with clickers along with the rest of the populace”.

The last journal pertains to rare, non-breeding, live birds seen on the island. This journal contains a list (including # of individuals) of birds that have been seen on the Farallones this year. We get a variety of migratory birds, such as grebes, tubenoses, geese, falcons, shorebirds, kingfishers, kinglets, warblers, and sparrows. Sometimes we get large waves of land birds, such as Ruby Crowned Kinglets or Audubon Warblers, after strong winds. Occasionally, other uncommon species are seen in small numbers, such as Belted Kingfishers, a Eurasian Collared Dove, a Saw-whet Owl and Brown Boobies. In the beginning of the seabird season, daily shorebird walks provide the opportunity to survey particular areas of the island where non-breeding species often migrate to later in the season. Though breeding birds currently prevent us from doing the shorebird walk, we keep our eyes open and identify any other species we encounter during the day. 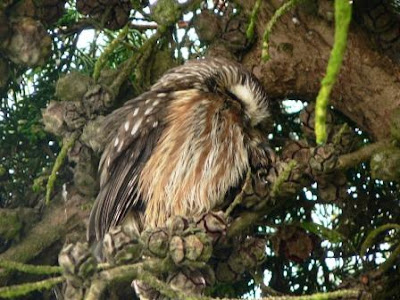 A Saw-whet Owl perched in the Monterey Cypress next to the PRBO house.

I love journal time! But I strongly dislike that Saw-whet...I'm tired of picking up his/her pellets filled with lovely Ashy bits!