In 1968, when PRBO first established the Farallon Island Research Station, the intent was to make this a long term project. Who could have imagined how successful it has been!

I (Ron LeValley) was fortunate to be a part of that first summer. At the end of the seabird season and the beginning of the land bird migration, I arrived on the island on August 21 with Dr. Richard Mewaldt to give Buddy Roberts, the first Farallon Biologist, his first break. It was a turning point in my career; and many of us seabird biologists can say that. The Farallones have possibly inspired more seabird biologist than any other location in North America and I feel fortunate to be one of them. I feel even more fortunate to be out here for a two week visit 40 years later! Of course, a lot of things have changed, and a lot of things have stayed the same.

What has changed? Well, for one thing I am typing this on a computer and will post this on the blog tonight via an internet connection. In 1968 we had one CB radio for mainland communication to the Palomarin headquarters. If the reception was poor, as it often was, we could sometimes go next door and use the Coast Guard radio. Our transportation was dependent on the Coast Guard -- when they transferred their Light Station personnel back and forth we were allowed to tag along. At first we got badges for our trip on the Buoy Tender that identified us as VIP (Very Important Passengers), but that didn’t last long! 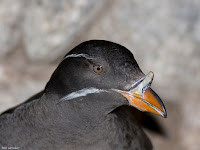 There were hundreds, maybe thousands, of rabbits on the islands that summer. At any one time there were three or four in sight over much of the island. The removal of the rabbits in the late 1960’s probably led to the resurgence of the Rhinoceros Auklet population. In 1968 we pretty much did not see this species, and now as I walk around the island at night, it is everywhere. Common Murres, Western Gulls and Brandt’s Cormorants have also increased in great part to the increased protection of the island by PRBO and Fish and Wildlife Service staff. The Brown Pelican has also increased dramatically. In 1968, DDT and its related compounds were threatening the very existence of our west coast population. During August of 1968, I saw one individual on one day! Later in September we did see as many as 500 on Sugarloaf and West end. Now they are being taken off the endangered species list and are so numerous that they have almost taken over the California Gull colony (see blog of May 20) as they arrive after breeding down in southern California and Mexico. We counted over 800 the other day and their numbers will increase dramatically as the summer turns to fall. These are great success stories.
One species that seems less common is the Cassin’s Auklet. The Cassin’s population may still be depressed from the massive breeding failure of 2005 & 2006, but the resurgence of the Rhinoceros Auklet population may also have displaced some of the Cassin’s. Such is life on a crowded seabird colony. 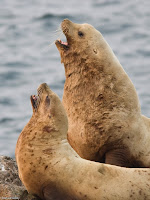 The seals and sea lions have also dramatically increased in numbers. In August of 1968, Dick Mewaldt and I counted 183 California Sea Lions on Southeast Farallon. Later in September we saw 6-10 Steller’s Sea Lions and one Harbor Seal. Last week Pete and I counted over 2,500 California Sea Lions, 121 Steller’s Sea Lions, 60 Harbor Seals and 33 Northern Fur Seals. And of course, that doesn’t count the Elephant Seals, who are here in lower numbers at this time of year, but in 1968 we were excited to find 7 on what is now known as Mirounga Beach!

In 1976 and 1977 when I worked as a Farallon Biologist, the Coast Guard had removed their full time personnel from the island and left the daily maintenance to PRBO. I remember spending many days working on the generators and even changing the light bulb in the lighthouse. Now much of that is automated, and the equipment is much improved. The station is run almost entirely on solar energy, there is a gray water system for the toilets and there is even a telephone in the house! Oh, and the foghorn is gone. I don’t miss that!
What hasn’t changed is the dedication of the PRBO staff, volunteers, and interns. Incredible work is being done to unravel the mysteries of the seabirds, marine mammals and their ocean habitat, the California Current. We still count and band birds, we still watch to see what kind of fish and other prey the birds bring to their chicks, and this information still is a vital part of our interpretation of the California marine environment. I feel privileged to have been a part of the development of this station and to visit it again this year.
P.S. For more pictures of my trip out here this year, you can visit my web site at www.levalleyphoto.com/gallery and look at the months of June and July.

Hi, is there a separate blog for white sharks? I have tried searching the archives. The sisters and ratpackers and what they get up to fascinate me. Thanks! Rose