Happy Halloween!  Moderate northwest winds, low visibility, some rain, and fog conspired to make our Halloween a relatively quite one.  The sole new arrivals were a pair of Clay-colored Sparrows. 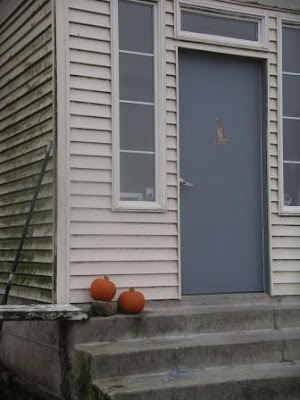 Holidays on the island are always a little different.  For example, this Halloween, no one dressed up, and we had zero kids trick or treating.  Although we didn't specifically celebrate this year, we did acknowledge the holiday by decorating the front stoop with a couple of pumpkins.

The spookiness that Halloween brings to the mainland is felt out here nightly.  Numerous biologists have reported encounters with ghosts while on the island.  One of the rooms is inhabitated by the ghost of a child that died there of  diptheria in 1901.  People have seen the figure of a woman out on the terrace at night.  Standing alone in one of the houses, at night, with the lights off, always sends chills down your spine.  Even though you know that no one else is on the island, you occasionally feel the presence of another person.  Not to mention the fact that the island is surrounded by some of the deadliest predators on the planet, lurking just below the surface. But the single, scariest thing to any fall biologist is the prospect of seeing no new vagrant birds.  It keeps us up at night.  We have nightmares when the island is devoid of passerines.  All we hear is the screeching of Western Gulls and bellowing of Elephant Seals.  How do the winter and summer biologists do it?  It's a mystery to us.