Our annual spring switchover has come and gone on the Farallones. The winter crew has departed along with the breeding elephant seals and the seabird season has begun. It’s been an interesting start to the season for us – Cassin’s Auklets are breeding and look to be off the their best start in several years, while Brandt’s Cormorants remain strangely absent from breeding colonies for a second straight spring. There has been one constant over the most of the last month – Wind, and lots of it.

For several days last week and many more over the last month, northwest winds were blasting the island at a steady 40 knots, and gusting upwards of 50 knots. The sea heaped up in great waves of white foam and salt spray coated everything.

Wind is one of the great driving forces in the ocean. Its patterns can dictate currents, drive nutrient rich upwelling, and shape the distribution of marine life at all levels of the ecosystem. But while wind is crucial to biologically rich areas of the ocean, like here in the Gulf of the Farallones, it can also make things difficult when you are living and conducting research on an isolated island. When it really starts to blow – there is no place to hide…

Biologists struggle against the wind while performing a Cassin's Auklet nest box check.


It’s difficult to know what 40 or 50 knots of wind really means unless you are lucky enough (some might say unlucky enough) to experience it. In those kinds of winds – everyone is just trying to hang on. Western Gulls are tucked low to the ground, facing into the wind, drawing their necks in to reduce the wind’s effects. Those gulls foolish enough to stand with their back to the wind were forcibly flipped into cartwheels by the gusts.
We biologists are hanging on too. It is actually a struggle just to walk around and stay on your feet. One must learn to lean into the wind at an angle to avoid being blown over. During really high wind gusts, the air will actually hold you up if you lean at an extreme angle (or even lift some smaller folks off of their feet!). 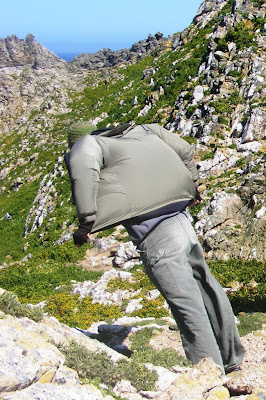 We say that at 45 knots, you can lean over at 45 degrees and the wind will hold you up. In winds like that, a hat or an unsecured data sheet will be gone in a flash, blowing 100 ft away by the time you realize it’s missing. At night you can feel the house shake as it is slammed by one powerful gust after another. It feels a lot like a small earthquake, with the whole building vibrating and pictures dancing on the walls. We are thankful for the solid construction of the original lighthouse keepers, whose 140 year old houses we still live in.
But, while the winds may get so strong that there are waves in the toilet bowl and it eventually flushes itself, we of the Farallones marvel at the strength and power of the wind that drives this dynamic marine ecosystem.

...and I thought working at a wind farm was bad ;-) Thanks for the perspective!

Go auklets go!! Hopefully krill are not being advected out of the reach of the CAAU...I'll keep my fingers crossed for lost of pink poop!