Spring and Summer on the Farallon Islands is abundant with breeding seabirds (13 species, to be exact), but Western Gulls are one of my favorites to observe.  One of my tasks on the island requires me to monitor a small plot of breeding Western Gulls.  There are four gull plots on the island, each of which is packed with birds whose age we know from their unique band combinations – as they were banded as chicks.   Each year has a new cohort combination (usually a color band on one leg and a numbered metal band on the other), so we can easily identify the year in which a particular bird was born.  Gulls are very territorial, and banding them allows us to follow their breeding attempts throughout their entire lives (up to 34 years!) as part of PRBO’s long term seabird research.

In the beginning of the season, I was given a map of my gull plot and a list of birds that were known breeders in that plot.  Western Gulls usually return to the same nest site every year to breed.  Each site is marked with a stake that is painted with the year the bird was banded and the cohort number.

One of the main tasks early in the season was resighting banded birds in each gull plot.  Resighting requires us not only to record the band combination of each bird, but to also read the numbers engraved on the metal bands. 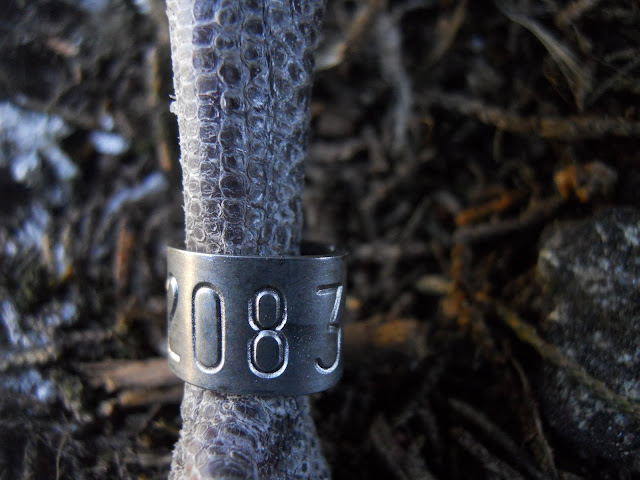 It sounds easy enough, but it gets tricky, as gulls can be pretty clever.  They are very aware of your watching them and every time you move to get a better look at the band numbers, the bird will also move so you only see numbers you’ve already seen.  Sometimes you have to get sneaky- pretend you’re looking at something else until you’re in a position to read the entire metal band and turn around quickly, before the bird has time to react. 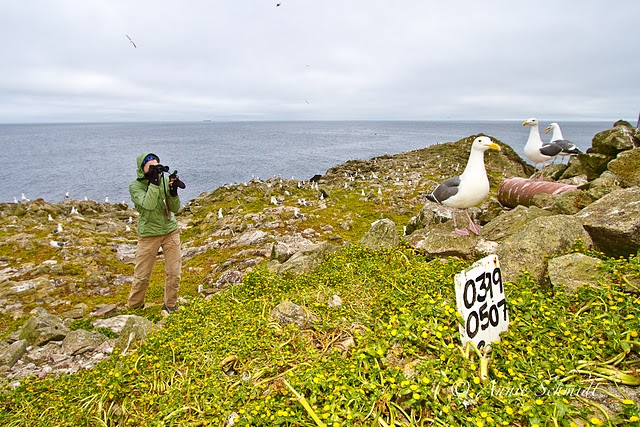 In May, the gulls started laying eggs.  We number them so we know the order they were laid in, and later, the order in which they hatch.  This helps us keep track of the productivity of each known-age gull.

After the chicks hatch, they are given temporary color bands with the nest and chick number.  As they grow older and start to move around, the color bands help us differentiate between chicks from different nests sites.

When the chicks get old enough, they get permanent bands.  This year, the cohort combination is metal on the left leg and red on the right.  This part of gull monitoring is probably the most fun since we were able to go into each followed plot and band all the chicks we could find.  We do this because the chicks that survive will come back to these sites in three years when it’s their turn to breed, and we can follow their reproductive success.

At this point in the season, chicks are beginning to fledge.  A chick is considered fledged when it is seen flying.  Walking around the island, we often run into gull chicks that are trying to fly.  They hop up and down and flap their wings, trying to catch the wind.

This Western Gull study allows us not only to monitor the reproductive phenology and success of known-age birds, but also provides us with information on the health and function of the marine ecosystem.  Unfortunately this year, gull reproductive success was very low – while many eggs were laid and hatched, most chicks didn’t survive to fledge. With over 40 years of baseline data on Farallon seabirds, we know that this year’s breeding failure is the worst recorded for Western Gulls in PRBO’s history on the Farallones. This highlights the value of these long term studies to show that we are observing  changes in the ocean that are having strong effects on Farallon wildlife.

Is this one of yours?

Photographed at the South Jetty of the Columbia River, OR on 9/27/2011