Southeast Farallon Island has one of the largest species lists for such a small area at this northerly latitude. With over 40 years of ornithological scrutiny and a list of 418 species, adding a new one to the list has gotten increasingly difficult.  Many of the species that are rare to California have been seen here already.  However there are numerous possibilities that have yet to make their debut in the state, and we ponder frequently which of these will show up here next.  Several other species, such as Western Scrub-Jay and American Dipper, are common in the state, but because of their more sedentary nature are unlikely to ever cross 20 miles of inhospitable ocean.  Although this latter group does not have the same exotic appeal as the former, long-time Faralisters are just as interested in this group.

One group that many Faralisters struggle with are ducks.  Other than Surf Scoters, ducks seem to shun flying this far off shore.  Three merganser species are commonly seen California, but only one, the Red-breasted Merganser, had been seen by Faralisters prior to today.  Of the two remaining, Hooded and Common, Hooded seemed slightly more likely just because they are a longer distance migrant.  On November 18th, though, Oscar Johnson spotted a Common Merganser in basic plumage just offshore.  We all ran down to the East Landing to document this new species.  Sam Roberts managed to get a few decent photos that clearly distinguish this merganser from the similar Red-breasted, but unfortunately it flew just before we could get even better photos.  From Sam's photos, the clear white chin patch is cleanly demarcated from the dark throat, and the dark throat has a clean, straight demarcation below against the mostly white breast.  Furthermore, the bill is thick-based and is bright orange along the culmen (or top edge).  Red-breasted Merganser has a thin bill with a dark culmen and has a blurry throat with no clean-cut pattern.  The Faralist now stands at 419! 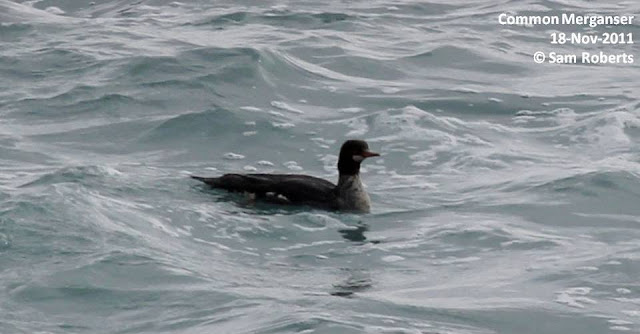 In addition to this first island record and the previously mentioned Short-tailed Albatross, we have seen several other interesting birds.  October 25th was a particularly nice day with light west winds and 5-10 miles of visibility.  A Summer Tanager and female Black-throated Blue Warbler were briefly seen at the lighthouse, but of greater interest were the island high count of eleven White-throated Sparrows and the long-returning Say's Phoebe, who we now refer to as Simon.  This phoebe was first banded in 2007 and has returned to spend its fifth winter on the island. 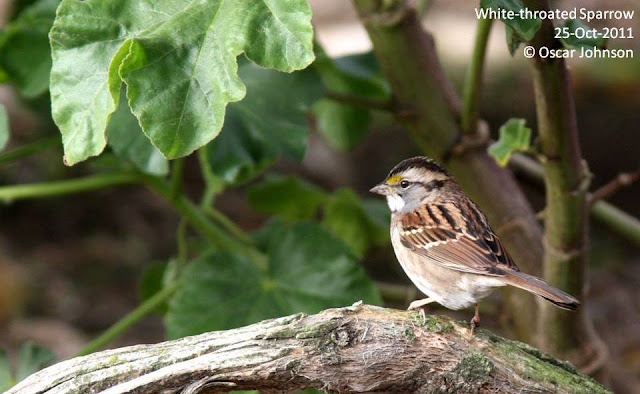 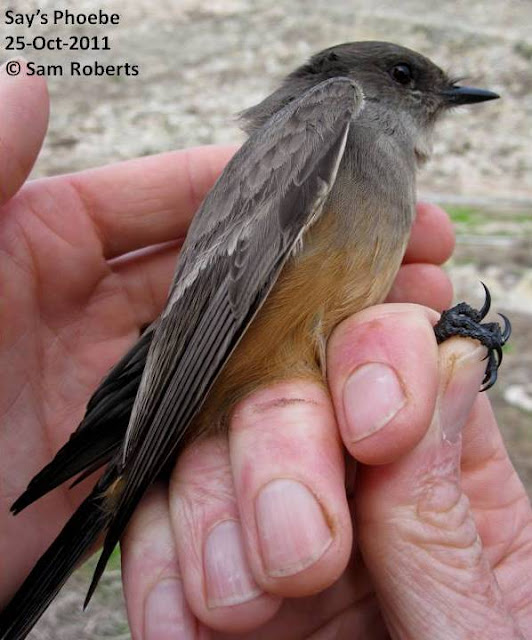 In addition to the above mentioned species, we also enjoyed two Swamp Sparrows and a rarely captured Rock Wren.  A few of these wrens typically over-winter every year, but they rarely come near our nets since they are not attracted to the few trees where the nets are located. 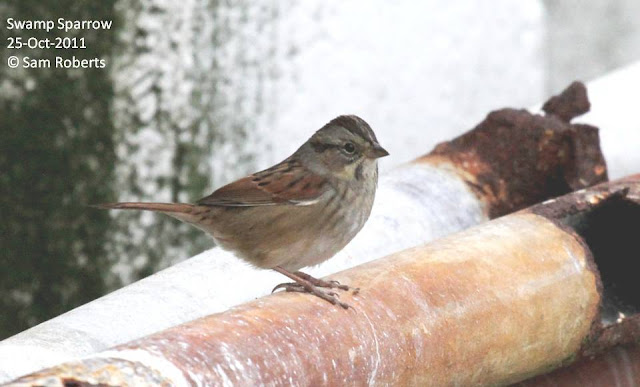 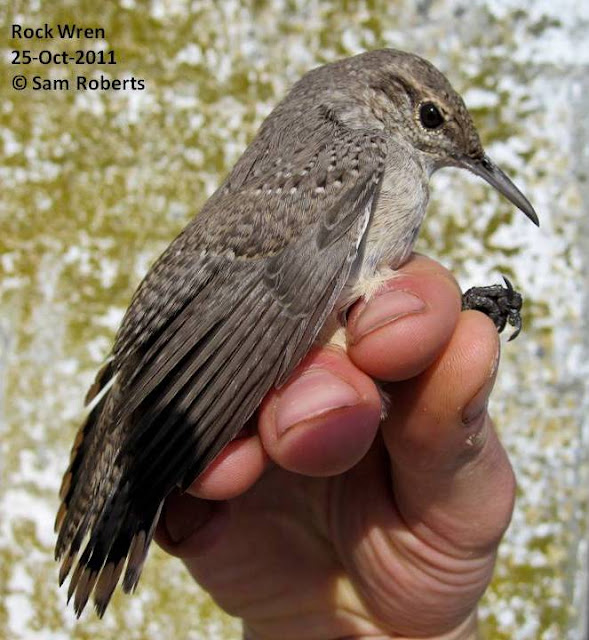 On November 1st, we were graced with a second Yellow Palm Warbler in just two years.  Western Palm Warblers are fairly common here during the fall, but the more easterly Yellow Palm is a very scarce migrant to California.  As the common name implies, Yellow Palms have more yellow than Westerns, in particular on the throat and the supercilium (or eye brow).  Prior to last year's Yellow Palm, this subspecies had not been adequately documented from the Farallones. 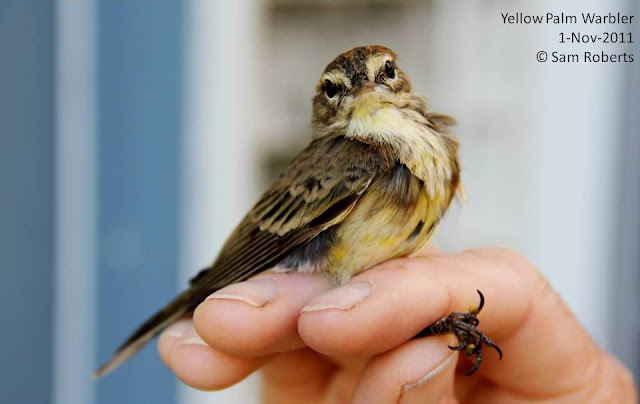 Here are two images of Western Palm Warblers for comparison: 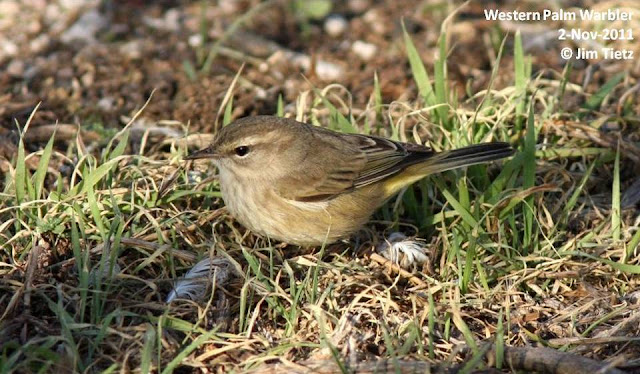 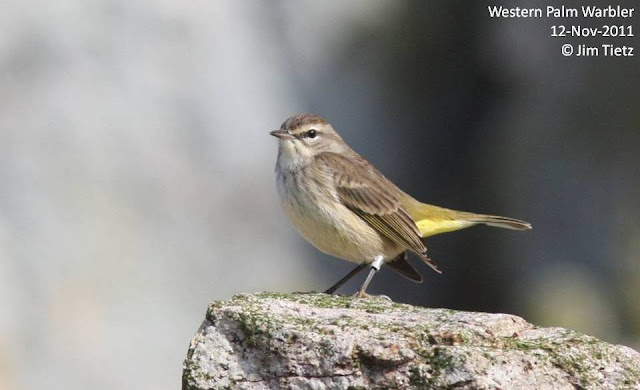 November 3rd proved to be another good day for migrants with an Eastern Phoebe, a male Black-throated Blue Warbler, and a record late Pectoral Sandpiper; the previous late date was 23-Oct. A second Eastern Phoebe made an appearance the next day. 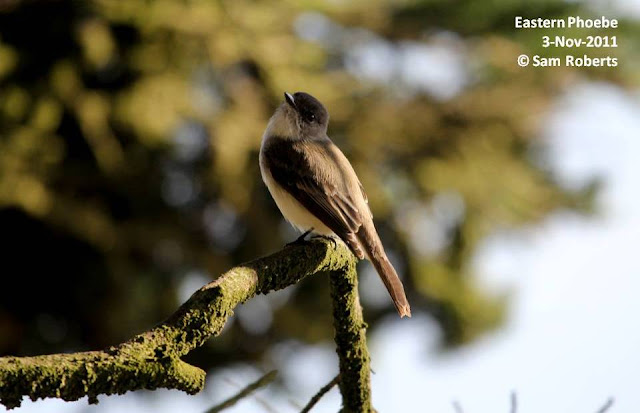 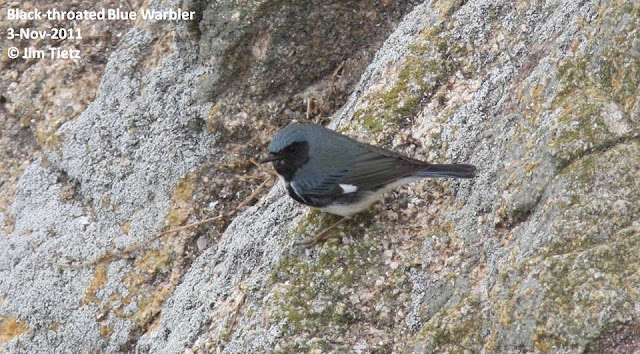 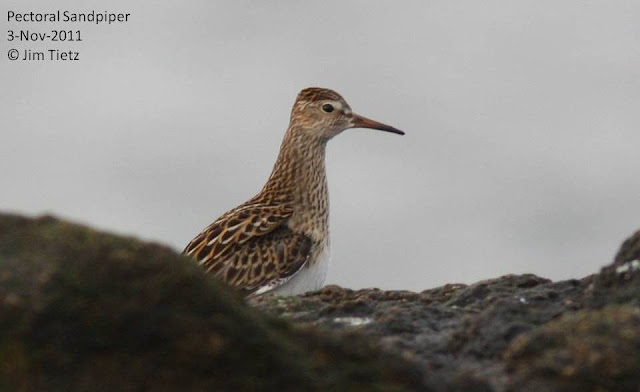 Also of interest were a few odd birds that had some of us scratching our heads such as this Herring Gull.  American Herring Gulls (smithsonianus) typically have more solidly dark back feathers and wing coverts.  The anchor patterns on the back feathers, checkered wing coverts, and tail pattern (not visible in this photo) are suggestive of the Asian Vega Gull, but the pale bill base, heavily barred undertail coverts, smudgy head streaking, and anchor patterns this early are not typical of Vega. 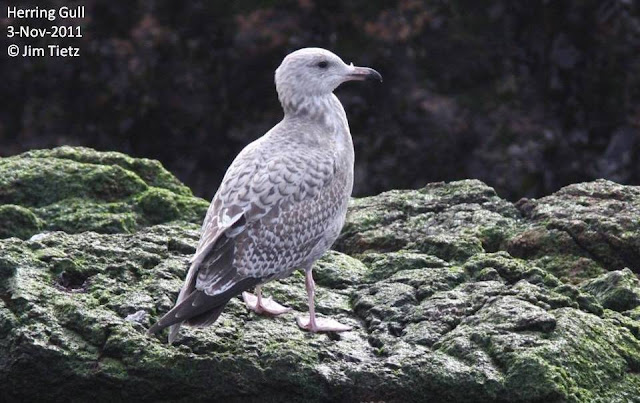 Another gull that caused some excitement was this bird, which looks to us like a Slaty-backed Gull, a largely Asian species which is as-yet unrecorded on the Farallones. Some aspects of the plumage gave us pause as to whether it was a pure Slaty-backed, including the limited streaking around the eye, the apparently rather pale mantle, and the limited "string-of-pearls" in the primaries (not shown in the photo below). Communication with birders in Japan, where this species is regular, furthered our belief that this bird is within the range of a pure Slaty-backed Gull. We will submit this record to the California Bird Records Committee to see if they endorse the identification. 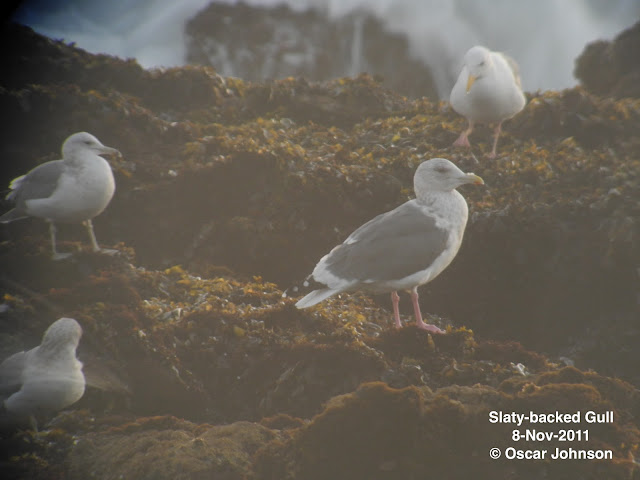 A Yellow-rumped Warbler intergrade between Audubon's and Myrtle spiced up our day.  This individual shows the eye arcs and lack of a supercilium typical of Audubon's, but the white throat wrapping up and around the back of the auriculars (or ear coverts) is more like Myrtle. 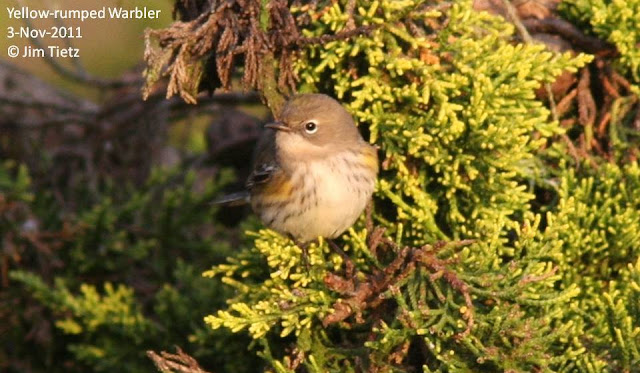 Two Horned Larks of different subspecies hobbled about on the gravelly area of the Marine Terrace.  One was quite pale, while the other was more richly colored. 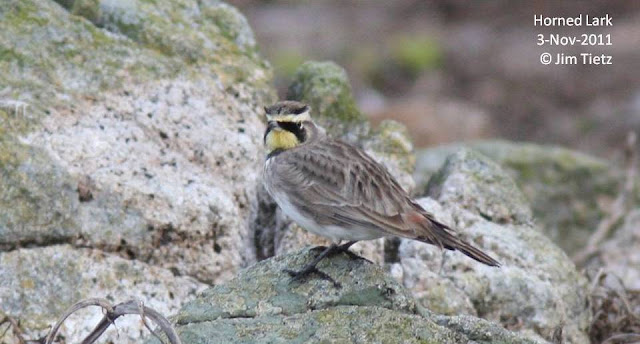 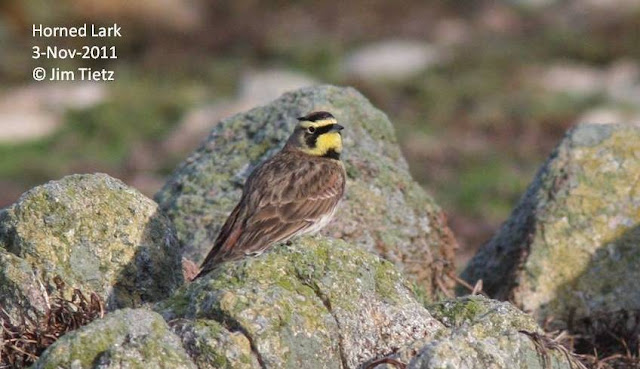 Brown Creepers rarely show up on the island, but when they do, they frequently are found hanging around the cypress trees. 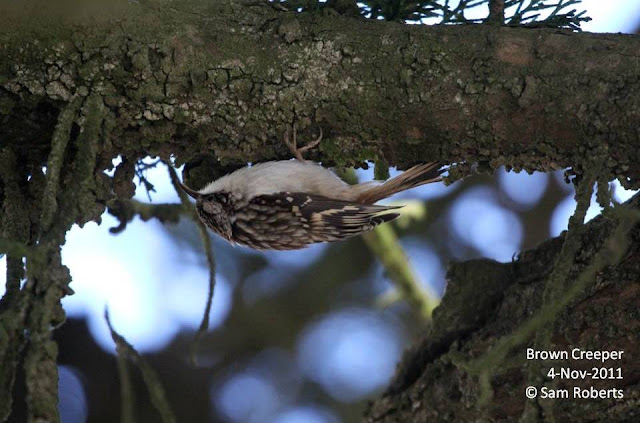 On 8 November, a Xantus's Murrelet turned up in Fisherman's Bay.  This species is in the same taxonomic family as the several species of alcid that breed on the Farallones (Pigeon Guillemot, Common Murre, Rhinoceros Auklet, etc.), only this one breeds on the Channel Islands off southern California.  There are only about 25 records of this species for the Farallones, and they usually show up during warm water El Nino years.  Why one would show up in these frigid waters during November will just have to remain a Farallon mystery. 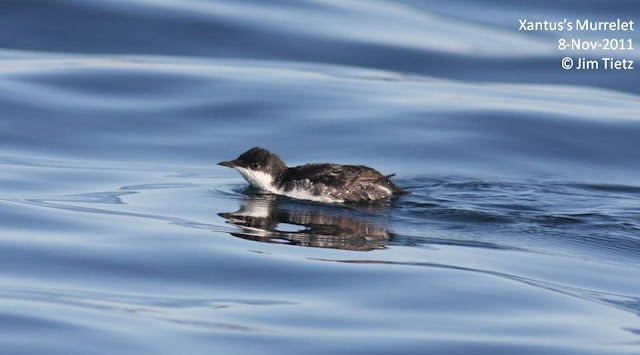 Just as impressive was the return of a Golden-crowned Sparrow with the color-band combination silver on the left and orange over orange over yellow on the right.  We abbreviate this combination as S/OOY, which has become this bird's name.  We first banded this bird in 2005 and have seen it every year since!  Look at that crown!  Go S/OOY! 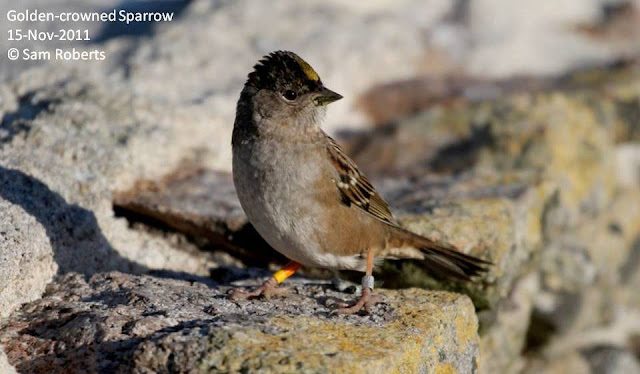 A lovely male American Kestrel also showed up on this calm day.  It has remained on the island for the past week to help rid the island of the introduced House Mouse. 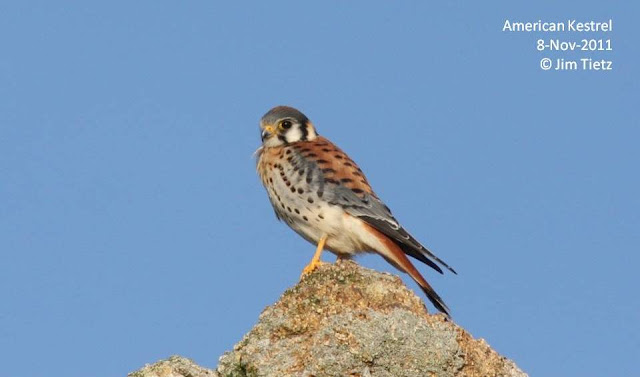 Lastly, a juvenile Indigo Bunting showed up the following day.  Juveniles of this species can be distinguished from the more common Lazuli Bunting by the more uniformly dark rufous-brown upperparts, less contrasting wingbars, and more uniform buff wash below with blurry streaking. 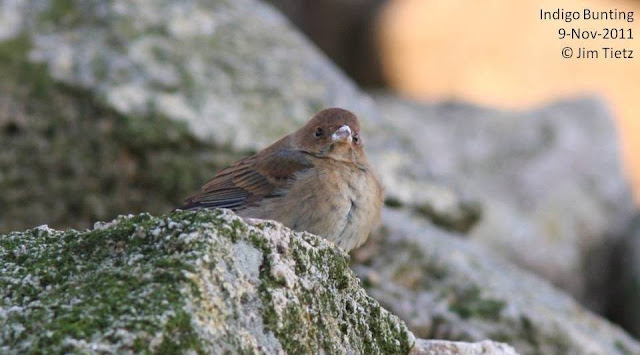