"The world needs to know the truth about seals" -Russ Bradley

(Never mind he was referring to their tendencies to roll around in their own filth). 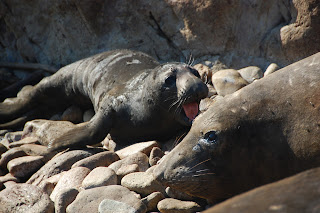 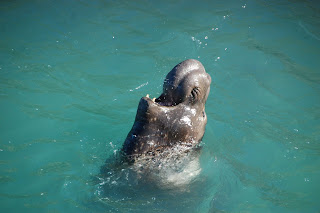 It's not likely that the elephant seals here on Southeast Farallon Island have ever heard of Socrates, Plato or Aristotle. They must have had to figure a few things out on their own, including fasting as a means to rid the mind of clutter, once advised by these men. Imagine your mind clutter free, I picture myself floating in a tidepool. These seals float in tidepools all the time, and they are good at it.

It is also possible that there is some physiology and maybe a bit of ecology involved in this particular life history trait.

They begin their fast after gorging themselves for 6 months straight. At 200+ meters their foraging behavior is not often witnessed, but check out this recent footage taken of an elephant seal gobbling up a hagfish. 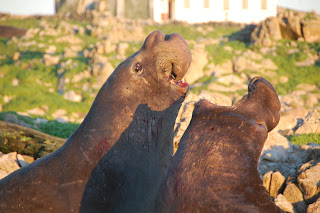 Anyway this is the beginning of month three for the males who have been simultaneously fasting and heaving their 2 ton bodies at each other, fighting to gain a harem, or a group of females. If they have succeeded, they've been expending additional energy trying to hold onto their harems. 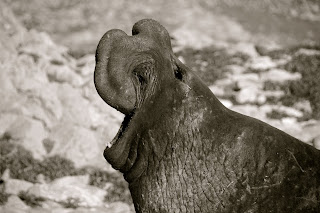 A bull named Herzog has been the Alpha at our largest harem on sand flat where he watches over (naps) alongside 36 female cows and their 30 pups. Ruxin (anyone watch the League?) naps alongside 8 cows and their 6 pups in our quietest and most peaceful harem up on marine terrace while Rumpelstiltskin is packed tightly alongside his 15 cows and 12 pups in Mirounga beach.

It should be noted that these place names which include the words sand, beach and marine, have no sand and are neither marine nor beaches. Strong El Nino years in the past have taken much of the sand out of these popular haul out sites. Another change these seals (and scientists) are getting used to is a large increase of California sea lions numbers near the eseal harems. It's possible the increase in Northern fur seals out on the West End of SEFI have pushed the California sea lions closer to us. 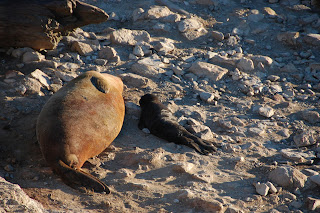 Back to physiology and fasting. The females go about their breeding season duties less violently, and more impressively, in my opinion, giving birth and nursing their pups for about 26 days before weaning them. Their energy expenditure is mostly related to milk production, which they go about efficiently. Elephant seal cows can produce up to 4 kilograms of milk per day, while fasting! 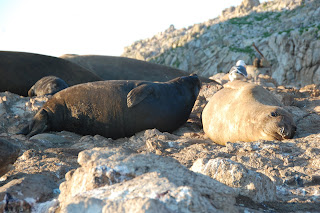 This isn't just a halfhearted, desperate attempt at milk production either. The stuff is 25-60% lipids. The milk on your cheerios, if it's whole milk, is about 4% lipids. Through this process these moms are losing 4% of their initial body mass each day, while their pups are gaining 10% of their initial body mass per day and essentially tripling their initial mass in about a month (Costa et al 1986). If you are having a hard time visualizing that, take a look at these pictures. At right is Rose and her pup the day it was born. Below it is Rose and her pup 25 days later, three days before she weaned him.

If the pictures aren't doing it for you, check out recent UC Santa Cruz Doctorate Graduate Melinda Fowler's thesis presentation entitled Regulation of lipid metabolism and milk lipid content in northern elephant seals. Thanks for the fun facts, Mel! 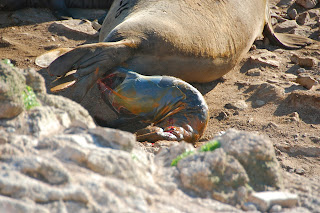 This month we've been lucky enough to witness all this, start to finish. These two photos here are of a cow we call Ivy giving birth a couple of weeks ago. It happened quickly, only taking about one minute. 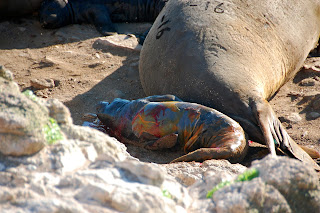 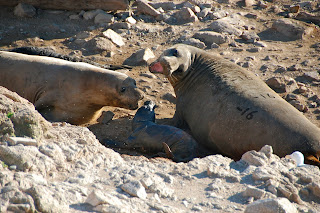 The cow next to her, Jenny (another shout out to the 'League'), went gaga for this newborn, as did a couple other cows in the area. It is pretty common for cows to get excited when there are newborns around, one challenge for a new mom is keeping her pup close by and away from these googly eyed girls. 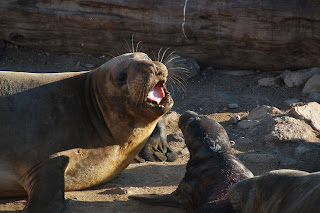 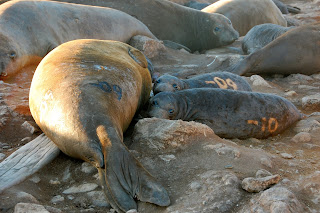 At left is an example of a way we keep track of whose pups are whose. Cows 09 and 10 have been sharing babysitting & nursing duties for some time now, pup sharing is another common occurrence in harems. Putting dye marks on both moms and pups allow us to track birth and wean dates. We use Clairol hair dye to do this (Color Seal Technology®!). No harm is done to the animal and the dye mark will disappear as the animal goes through its molt each season (shedding its hair and top layer of skin). 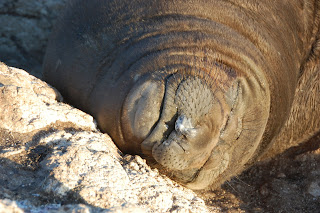 Eventually weaned pups are tagged, allowing us to track their whereabouts for as long as their tags stay on. Eight of our cows this year were tagged when they were weaners and have returned to the same areas to have their own pups (shout out to Maddy, Rose, 07,Julia Child, Lodi, Tiffany, Butternut & 43!). We've begun to tag this year's cohort of weaned pups, meet 01 & 02 at right. 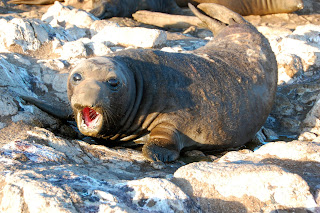 Flipper tags are small, but key in pinniped population assessment. They help us answer questions related to population dynamics, regulation and growth. Are the seals coming back year after year to the same location or are they leaving us for sandier shores? How do survival rates vary across age classes? The answers to these questions give us better ideas as to why the population numbers look the way they do in any given year. 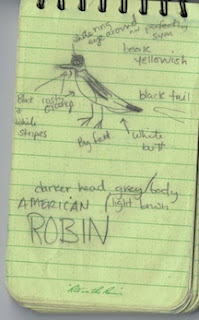 Well, enough about seals for now. What about birds? I came across an American Robin a while back. It was very exciting for me, I had never seen anything like it before. I sketched what I thought was sure to be a discovery of epic proportions. 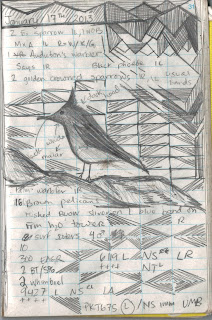 NOT. I hold onto hope that I will be a birder someday, maybe you can help me identify this one?


In all seriousness, the Northern Gannet made an appearance on January 28 after a month long hiatus, suspicious as this was also the day Russ Bradley arrived. Of course it would take a seabird biologist to lure the Gannet back to SEFI. 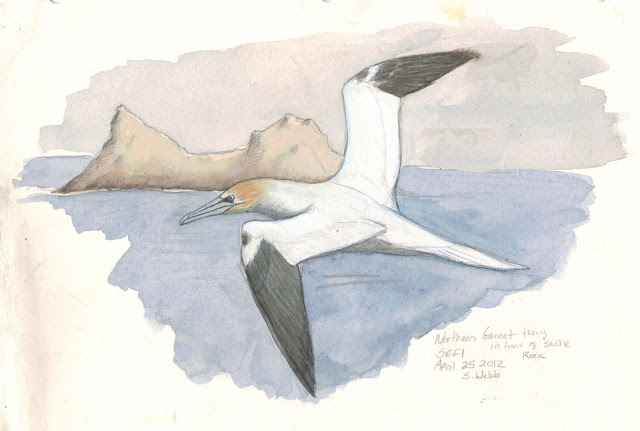 This watercolor was done by Sophie Webb who has recently returned to SEFI to work on her next book. Sophie is an ornithologist, artist and author who has traveled around the world studying and painting birds.

Maybe she can give me lessons?