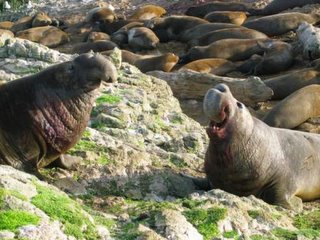 Today there was a long, exciting battle between Lloyd and Rusty. Elephant seal breeding colonies are organized into harems of cows, each defended by an alpha male. The males battle for dominance, and the right to claim a harem is hard won, with victory generally going to the larger or fiercer opponent. Lloyd and Rusty are subadult males, not quite ready for the heavyweight title and a harem of their own, but these battles establish ranks and train the seals for the big event when they actually fight for the prize. Here is a video from last year of the bull JD chasing Altamont off the Sandflat and away from his harem of cows. This year, JD was deposed from the Sandflat harem by Nero, and Altamont has a harem on Shell Beach.

Sandflat is currently the largest harem on the Farallones, with around 65 cows at the peak of breeding in mid-January. After the islands were re-colonized in 1971, the largest harems became established on West End at Shell Beach. However, the Shell Beach colony began a steep decline after the intense El Nino event of 1982-83 scoured the access beaches away and left an 8-foot vertical wall in the path of cows trying to breed there. This severe El Nino, along with the 1991-92 and 1997-98 were the three most intense El Nino events in the past 150 years. Over the past 40 years, PRBO scientists have documented numerous impacts on breeding, survival, and diet of marine predators from these and other ocean-climate events thanks in large part to the detailed data we collect at the Farallones. Conservation requires science, and PRBO provides some of the best science in the world.

In watching this again, I just noticed how close Rusty and Lloyd are to Sand Flat! Is Nero having a tough time keeping these rapscallions away from his girls?

Several docents at Ano Nuevo State Park said that the alpha bulls usually don't come back after a year with a harem and are suspected to die. I guess JD didn't read that rule.

He probably thought he was above the rule, since this years season would have been the third year in a row (after having had his own private little gulch with a few females a year before taking over Sandflat) that he would have been alpha at SF.