Weaner is the term we use for a weaned pup. When a pup is born it is small and wrinkly, weighing about 80 pounds. Like human infants, elephant seal pups spend most of their time eating, sleeping, and crying. Pups nurse for about 28 days before being weaned. During this time the mothers eat nothing; they metabolize blubber to survive and to produce rich milk for their pups. As a pup grows fatter and fatter, its mother becomes ever skinnier. Finally the cow mates with the alpha bull and returns to the sea to find food, leaving her pup behind to fend for itself. A chubby, healthy weaner weighs about 200 to 250 pounds at this point. Currently we have five weaners on our beach. 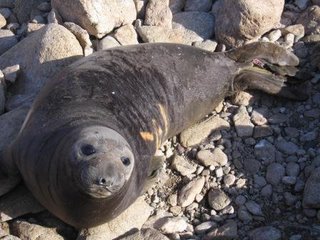 First, there is Weaner 01 (she won't receive a real name until she returns as a cow ready to have her own pups). Weaner 01 was born on December 8th, 7 days earlier than any pup previously born on the Farallones, and 8 days earlier than the second pup born this season. As she was the first weaner, she suddenly found herself all alone after her mother left. She handled her abandonment quite well. She quickly found a nice spot on the outskirts of the colony, far enough away that she wasn't getting harassed by other mothers, but near enough that she could still watch what was going on in the colony.
Recently, all the weaners have begun to move around and explore the areas around the beach.

Weaner 01 is beginning to molt her black lanugo fur in exchange for a nice new silver one. Notice the bald patches on her head and sides where the old fur has been lost. With her old coat, she will also lose the number, which was stamped on her fur with Clairol blonde hair bleach when she was a pup so that she could be identified as the pup of Cow 01, named Giovanna. Clairol generously donates this product each year so we can harmlessly mark the seals to keep track of them all . The numbers are molted off with the fur. 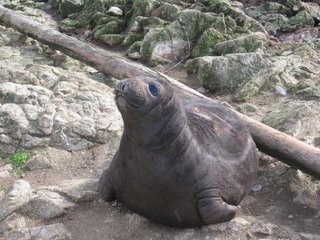 Weaner 17 is the biggest and chubbiest of our weaners. His mother did a great job of fattening him up- and she did it in only 21 days! That's a full week less than average. Recently, he has been hanging around the tripod we use to weigh pups, as if challenging us to to get him on the scale. We've already determined that this year's pups are 10% heavier than last year's indicating that the cows fed very well while gestating these pups. Last year's pups were smaller because feeding conditions for cows were not so good. Cow elephant seals feed in very deep waters beyond the continental shelf, primarily on squid. The cows may be in such good condition due in part to the unusual numbers of deepwater Humboldt squid in the area last year. Here is another example of how our marine wildlife studies tell us about parts of the ocean otherwise inaccessible to us. 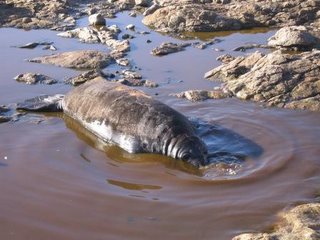 Weaner 20 has recently discovered a puddle along the edge of Sand Flat and seems to enjoy playing in it- at least until somone bigger comes along. Weaners often get pushed around by bigger seals, which is just about everybody else on the beach. When Weaner 20 gets chased out of the puddle, you can hear him letting the whole beach know how unhappy he is. Pup tantrums are not uncommon as the weaners learn to cope with the hardships of life without Mom. The weaners must learn to swim and eat before their blubber reserves are depleted, so a fat pup produced by a fat cow might have a better chance of surviving these early months. Your donations to the Farallones Science Program of PRBO will help us better understand these amazing animals, and the oceans we all depend on for survival. The ocean dominates this planet, and is the primary engine of global climate, so knowledge of the ocean is crucial in these days of accellerating global climate change. 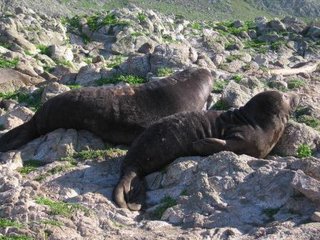 Weaner 21 is the smallest of our weaners. Here you can see him with Weaner 17 behind him. Click on the photo to watch them playing. Weaner 21 was abandoned by his mother, Schnitzel when he was two days old. He was lucky though and quickly adopted himself a new mom, First Cow, and brother, Pup/Weaner 20. Cows whose pups have died or been stolen may adopt a new pup later on, but most cows do not adopt a new pup when they already have one to raise. First Cow, however, allowed Pup 21 to hang out with her pup and after a few days even began to nurse him. She has done a great job of raising both pups, further evidence of the great condition these cows are in this year! 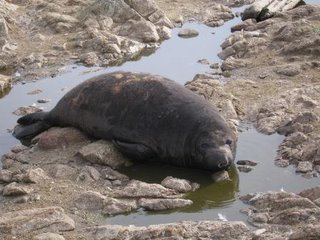 Weaner 28, the daughter of Drip and granddaughter of Faucet -if she comes back as a cow, we are considering naming her Splash- is the youngest of our weaners. She is also the second largest- almost as fat as Weaner 17. She spent her first few days of weanerhood all by herself, far from the other weaners. It looked almost like it was too much trouble for her to drag her big body around on her small flippers, but recently she too has begun to explore and meet the other weaners.

These early weaners were lucky. They were born before the beach became crowded and had plenty of space and time to sleep and nurse in peace. Now Sand Flat, our main pupping beach, is much more crowded and chaotic. The photo below shows Sand Flat on January 22nd. The pups there now are frequently interrupted by their mothers squabbling with other cows and are often squished between other seals in the cramped conditions. These interruptions mean less time suckling each day, and slower development, but mom has to defend her pup or it could be killed by another seal. We have many pups now on Sand Flat and five other colonies around the island so there are many more weaners to come!

How do you identify pups that go back into the ocean and come back a bit older and bigger (the following year perhaps)?