Resurgence of the third major breeding site on SEFI 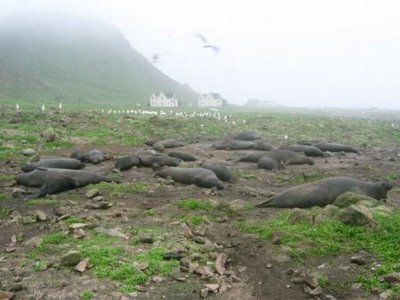 Now, for the last two breeding seasons cows have resumed breeding on the Marine Terrace in numbers (picture above), choosing this roomy, plant covered area that requires a longer trip overland from the sea. This year the Marine Terrace breeding site has almost doubled the number of breeding animals over last year as ever more cows are attracted to this site.

Click on the picture below to watch a full length video of an e-seal birth on the Marine Terrace. 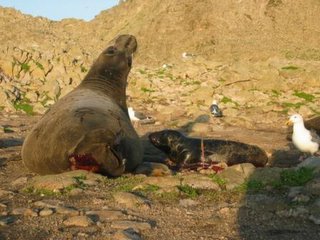 And this change has well paid off for those animals. The pup mortality rate is 0 % so far (compared to 56% at Mirounga Beach, and 23% at Sandflat), and the Marine Terrace has produced some of the fattest and healthiest pups on SEFI. Every cow has enough space to raise her pup in peace, so the often-observed inter-female territorial fights of Sandflat rarely occur. No pup was bitten by another cow because it trespassed on its neighbor (a bite to the head is the most frequent cause of pup mortality), and the Marine Terrace alpha male, Don, has kept disturbances by subadult males to a minimum so the mothers have ample time to concentrate on feeding their pups. 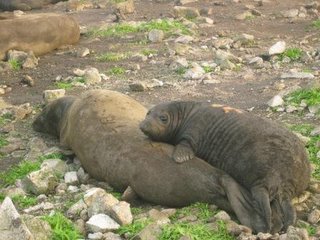 So, every pup on the Marine Terrace has gained an enormous amount of weight in a surprisingly short amount of time. Here is a picture of our biggest pup on the terrace, 28 days old today, which means he is about to get weaned, and he's now bigger around than his mother.

It seems like such a good situation, zero mortality, fat pups, you may wonder why haven't cows moved up to the Terrace earlier? It may be that there was a shortage of bulls. Cows depend on the beachmaster to keep inferior quality males from harassing and mating with them, so if no large, quality bulls are available to rule the Terrace, cows will likely stay under the aegis of an established beachmaster. As populations wax and wane, the demography and age-structure of the populations change, and this can affect the population as a kind of feedback. PRBO Conservation Science is a leader in wildlife population biology, making use of our long-term data to understand the factors that cause an animal population to increase or decrease. This is crucial information for managers and policy-makers, because conservation dollars are scarce, so our efforts must be directed towards the most influential segment of the population at risk.